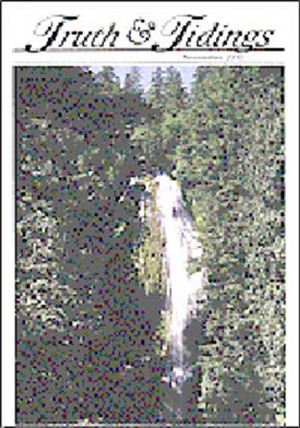 All believers can truthfully sing, “Free from the law oh happy condition,” for they have learned that the law can neither justify nor sanctify. This freedom however, does not mean that they are at liberty to live lawlessly, nor that the standard of their conduct is below what God demanded by the law. While the “Ten Commandments” do not give every detail of the claims of God, they were a summary of these in a way that could be easily remembered. Their importance is manifested in that they were written by the finger of God on slabs of stone, and, for their preservation, the Ark was specially constructed. Possibly some might think that now being justified by faith, the law has no more any concern for them. Though this is true, a careful examination of the practical part of Ephesians will show that the apostle expected the conduct of the saints to rise to that of law keepers. The two great requirements of the law were “love to God” and “love to man.” The exhortation, “Walk in love” (Eph 5:2), implies that this is the standard God expects to find in His own. Just as Christ’s sacrificial life was a sweet savor to Him, so the walk in love of His people will likewise be to Him a sweet smelling savor. Thus, “The righteousness of the law might be fulfilled in us who walk not after the flesh, but after the spirit” (Rom 8:4).

The first commandment, “Thou shalt have no other gods before Me,” demands that the One who had delivered Israel from Egypt was to be the only One to be called God. This thought is parallel with the words of Paul, “One God and Father of all” (Eph 4:6). He is not only the supreme God, but none other is ever to be considered. Egypt, out of which the Israelites were delivered, was a great center of idolatry Ephesus also was full of idolatry. So both must have needed to learn the importance of the only Lord God. The saved, not only know the One God, but they rise above those who first heard the law, in that they know Him as Father.

The second commandment ls with idolatry. Ephesus was a great center of idolatry Consider the uproar which arose through the apostle’s preaching of the Gospel, when the multitude shouted out “Great is Diana of the Ephesians” (Acts 19:28). The believers could have sung, “Idols once they won thee charmed thee,” but they were taught that “no covetous man who is an idolater hath any inheritance in the kingdom of Christ” (Eph 5:5). In the commandment, mainly objects made by man were condemned, but the standard is raised in this passage so that any desired object which takes the place of God is viewed as an idol. Of all the evils characterizing the history of Israel, none was so persistent as idolatry, and in this age of grace it manifested itself quite early in the professing church.

The third commandment forbids the misuse of the Lord’s name. There is no corresponding statement in Ephesians, but there are instructions regarding the misuse of the tongue, such as, “Let no corrupt communication proceed out of your mouth” (Eph 4:29), and even “foolish talking and jesting are also forbidden.”

The fourth commandment regards the Sabbath, which was not only a day of rest for man, but was time set apart for God and was holy. He has a claim on the time of His own. The expression, “redeeming the time” (Eph 5:16), while not referring to time spent for God, is a reminder of the responsibility for all the saints to make the best use of the time at their disposal. Time is at a premium, yet often it is wasted as though it were ever so plentiful. We sing regarding the unsaved, “Room for pleasure, room for business,” but the Christian must remember that God values the time spent with Him perhaps even more than the service we render to Him.

The fifth commandment, regarding respect for parents, is the only one directly referred to in Ephesians. In chapter 6:1-3, Paul speaks of it as the one commandment with a promise. In many places today, children have little regard for their parents, and feel that if they can provide for themselves they have done well. With so much social help, the dire need of aged parents is not as keenly felt, but “respect” for parents entails honoring them in every way. Quite often, older people feel lonely, and value the time spent with them more than the money spent on them.

The sixth commandment, “Thou shalt not kill” is one that saints find easy to obey, but the standard is raised for them, for they are not even to allow their anger, which is often the cause of murder, to remain after sunset. (Eph 4:26). The wrath of brethren, while not actually murdering others, has at times killed them in the spiritual sense. (Cp “Biting one another, …consumed one of another”) (Gal 5:15). The tongue can be as cruel as the sword.

The seventh commandment, “Thou shalt not commit adultery,” corresponds with the condemnation of fornication, which is so vile that it is not even to be named, and so serious that those who indulge in such evils are not subjects of God’s kingdom (Eph 5:3-4). In the Gentile world, fornication was so common that it was not viewed as a serious crime. In many parts of the world today, including those which were once respectable, the same can be said of it.

The eighth commandment, “Thou shalt no steal,” has an answer in the words, “Let him that stole, steal no more” (Eph 5:28). Again the standard for the saints rises higher than the law, for a positive injunction is added, that of giving to the needy. There is ever the danger of saints thinking that if what they are stealing will never be missed by the owner, then it is not a serious offense to take it, but though the verse implies that some of them had been stealing, this must be ended.

The ninth commandment, “Thou shalt not bear false witness,” has its counterpart in the words, “speaking the truth in love” or “being truthful.” It is never expected that any Christian would be untruthful. Yet alas, cases have been known of those who have deliberately told lies when the truth would have involved them in trouble. The early days of church testimony witnessed the seriousness of lying, for Ananias and Sapphira filled early graves for acting falsely (Acts 5). Perhaps this commandment is specially meant to refer to bearing witness in judicial matters, but falsehood is serious even in other matters.

The tenth commandment is a warning against covetousness. This is another evil which is not to be named amongst the saints (Eph 5:3). It caused the Fall, for it was really the desire for that which God had forbidden which led Eve to take the fruit. It is the root of many evils, and in no way can be viewed as of small importance. It is a weed that could grow in any heart, and should be rooted out as soon as it is detected.

There is a simple but serious lesson which can be learned from connecting the law and this epistle, one which should never be ignored. The lesson is that God demands right conduct by His own, so that grace does not lower the standard set by the law, but enables the believer to rise to it, yea even to a high level. There were those who “turned the grace of God into lasciviousness” (Jude 4), but such were not true believers. They crept into the company of the saints, but they were doomed to judgment. The mention of the Holy Spirit so often in Ephesians reminds us that it is only by His aid that we can live according to the divine standard.