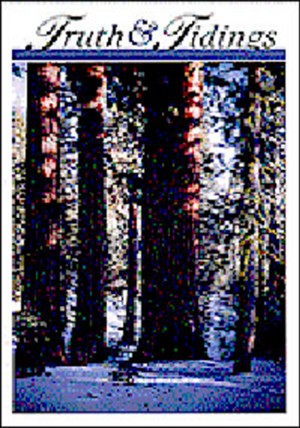 Paul Kember was born to John and Alma Kember on February 24, 1943 in Sarnia, Ontario. His father served God in the gospel for years, but when he died with cancer at 48, Paul, the oldest of a family of ten, became a father to the others. In 1963, he married Phyllis Bertram of Taylorside, Saskatchewan. In December, 1977 he was commended to full time work in the gospel, but it was a work in which they were already almost fully engaged. They lived in Sarnia and then moved to the St. Thomas area where they have lived and labored for many years, seeing their two sons and two daughters saved and many other precious souls through their tireless efforts in the gospel.

In 1959, brother Jim Likpe and I were preaching in a gospel tent at Lake Shore, Ontario. Among a number of troubled souls at the meetings was Paul. On July 27th, we were invited for supper to the Kember home and went early with the hope of being able to speak to Paul. He said that after hearing the gospel all his life and seeing the reality of it in his own parents and grandparents, now that he wanted so much to be saved, he did not know how. We showed him Luke 19:10 and 2 Corinthians 4:3, “If our gospel be hid it is hid to them who are lost.” While reading Romans 5:6, he said that being “without strength” described him exactly. We then read the blessed five words, “Christ died for the ungodly.” He said, “If this is true then Christ died for me whether I believe it or not.” He had always thought that it was believing that would make it true that Christ died for him, but he did not know how to believe. He had begun to see that it was a fact. His believing did not make it true. On the way to meeting that night, the Savior in Romans 5:6 was revealed to him. It dawned on him that it was a great reality that Christ had truly died for him. At the tent door, he asked, “Can a person be saved without believing?” When I told him no, he said, “But it is true and I do believe that Christ died for me.” He was born with a deep, burning love for precious souls and spent the next 38 years trying to win sinners to the Savior. He was engaged in the work of the Lord when on Tuesday, November 25, his car was hit broadside by a driver who was intoxicated.

A thousand people and more came to the Highbury Avenue Gospel Hall in London, Ontario on Monday and Tuesday, December 1 and 2, to honor the memory of Paul Kember. At the funeral, Bill Seale told of Paul’s life and labors, Norman Crawford preached the gospel and David Oliver spoke at the grave. The most amazing fact is that God’s dear people saw in Paul’s humble door to door work among poor people the great reality of true service for God. A large number of people whose lives were a tangled mess have been saved and their lives transformed. It thrilled me to think that dear Christians understand such values and let this be known so eloquently by a thousand people coming to honor his memory

The dignity, courage and faith that dear Phyllis manifested were amazing. Please pray for her and her family in the days ahead.