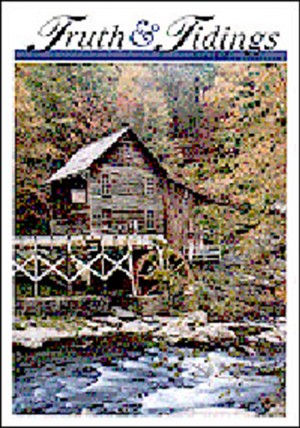 An interesting account of the results of a remark made by an exercised, godly man.

My introduction to the gospel was through a godly young woman in assembly fellowship who spoke to me about the two roads and the two destinies. Shortly afterwards, in May 1947, I was saved through the preaching of Mr. Harold Paisley, and in September that year was received into the fellowship of Cregagh Street assembly, Belfast, Northern Ireland.

Mr. E. Fairfield, on a visit from Venezuela, had gospel meetings during October and early November 1951. The meetings finished on a Friday, as he hoped to commence in a new area on Sunday night and have a suitable period before the holiday season at New Years. In the hall, I was helping arrange the seating for Sunday morning when Mr. Fairfield reentered to get his Bible. He came across he hall and had a short conversation with me asking some personal questions, then said: “Pray, and perhaps some day we will meet in Venezuela.” This was the last contact I had with him for more than five years.

Early in 1957 1 wrote to Mr. Fairfield in Venezuela reminding him of our conversation. He replied immediately, requesting that I write a letter that he could show to others of the Lord’s servants, explaining something of my exercise as to the work in Venezuela. My reply arrived in time for Mr. Williams, Mr. Saword and brother Jose Naranjo, to be informed. This took place at the Aroa conference at Easter time. Their reply encouraged me to put my exercise before my elder brethren, men whom I respected and who had been a help to me from the beginning.

During the intervening years I had spoken to Sally, the young woman who first spoke to me about my need of salvation, who was in fellowship in Albertbridge Road assembly, Belfast. After nine months of prayer we felt that it was the Lord’s mind for us to eventually unite in marriage with a view of going to Venezuela. Several years elapsed before we married in June 1958, in keeping with the counsel of the Lord’s servants communicated to us through brother Fairfield. We hoped to leave shortly thereafter for Venezuela, but these plans were interrupted due to a revolution which took place in Venezuela in April that year. The newly elected government closed the country to all immigrants, and so commenced for us a two year waiting period.

The delay was disappointing, yet from the very beginning, we were encouraged by Genesis 41:1, “And it came to pass at the end of two full years.” “Two full years” seemed to be indicated as the period during which we would have to wait.

Mrs. Fairfield and Elizabeth, from the time that they knew about our exercise, had taken a very genuine interest in us and were a help in preparing us for the work. It was Mrs. Fairfield, at this juncture in our life, who spoke to us about the need in eastern Venezuela. Through her, we first heard the name, Los Altos de Santa Fe, the place where we later made our home.

Mrs. Fairfield’s home-call brought Mr. Fairfield to Ireland, and during our two year period of waiting, he became a constant visitor. He was of a fatherly disposition and through his many anecdotes, we learned much about the work and workers in Venezuela. For the first time we heard the voice of beloved don Jose Naranjo preaching on Jer. 24:3, “the good figs, very good; and the evil, very evil”.

Unknown to us, Mr. John Wells and don Jose Naranjo made representations for us with the Venezuelan government just as soon as it became know that the door was open for immigrants to enter the country. On two occasions, their application on our behalf met with success. News of a visa being granted for us to enter Venezuela reached us shortly after Easter 1960, two full years after we heard that the door was closed to all immigrants.

Our journey took us by boat from Liverpool to Montreal and from there by road to New York. A Dutch cargo passenger boat took us from Brooklyn to La Guaira, Venezuela where, on the 30″ of June, 1960, we finally set foot on Venezuelan soil. On the warfside, we were met by Miss Sadie Mcllwaine and Miss Fanny Goff. Mr. John Wells and Mr. Joe Turkington arrived a short time later and helped us though immigration and customs, and took us that same night to Valencia where Mr. and Mrs. J. Milne had a supper waiting for us. At that time, Mr. Fairfield was not in Venezuela.

He and Mrs. Joan Fairfield, who endeared herself to the Venezuelan people, arrived in early August, 1961, a few days before the home-call of Mr. William Williams. It was in Puerto Cabello, on their arrival, that Mr. Fairfield and I finally ‘met’ in Venezuela. Almost ten years had passed from the time that he spoke to me in Cregagh Street Hall. Our meeting was, undoubtedly, the result of much prayer and illustrates what may result from a simple seed implanted in the mind. To me those simple words are unforgettable; “Pray, and perhaps some day we will meet in Venezuela.”

In the goodness of God, almost twenty-five years passed from that day until our brother’s home-call. It was a privilege to know him and to labor with him. We first worked together in 1963 on the building of the hall in Los Altos de Santa Fe where we made our home. This was the first hall built by the Lord’s servants in eastern Venezuela. In 1964, he and I built the portable hall that was erected in Puerto la Cruz and led that same year to the reformation of the assembly there. In early 1965, we were together in the building of the hall in Ciudad Bolivar. Thereafter, we labored together often in the work.

We ‘met’ in Venezuela.