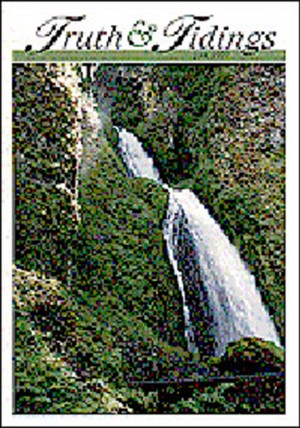 Editorial: A Memorial to Charles Strom

Faith or Fanaticism: Is the Word of God Inspired?

The Believer in the Workplace: The Christian Teacher (1)

Gospel: When the Morning was Come

The inerrancy of the Word of God is part of the “faith once for all delivered…” The article which follows is valuable reading for young believers.

Inspiration is the Spirit of God imparting to the writers of the Bible the divine message, enabling them to express accurately that message in their writings. “Holy men of God spake as they we, moved by the Holy Ghost” (2 Peter 1:21). The Holy Spirit controlled the writers of the Bible so that it is absolutely accurate, authoritative and trustworthy. Thus, the holy Scriptures are living. While the men were moved by the Holy Spirit, they remained thinking, willing and self conscious. This resulted in their particular mannerisms and styles being clearly seen in their writings. The divine influence is primary and the human is secondary. Thus, what they wrote cannot be looked upon as their own product, but as the pure Word of God.

The Claim to Inspiration

The Bible makes clear and absolute claims to being the inspired Word of God. “All Scripture is given by inspiration of God” (2 Tim 3:16). The Bible is vibrant with the breath of God speaking to all who will hear and obey The writers themselves claim inspiration for their writings and for the writings of others. “And Moses wrote all the words of the Lord” (Ex 24:4). “The Word of the Lord came unto me” (Jer 1:4; Hos 1:1; Joel 1:1, Micah 1:1; Zeph 1:1; Hag 1:1; Zech l:1). “The word of the Lord came expressly unto Ezekiel” (Eze 1:3). We are told in Acts 1:16, “Which the Holy Ghost by the mouth of David spake before concerning Judas.” Peter, by linking the epistles of Paul with other scriptures claimed divine inspiration for them (2 Peter 3:15,16). The claim to verbal inspiration is unequivocal.

The Lord Jesus again and again testified to the inspiration of the Scriptures, referring to them as the Word of God (Mark 7:13; Luke 4:4; John 10:35), claiming for them absolute authority and unerring accuracy. “It is easier for heaven and earth to pass away, than one title of the law to fail” (Luke 16:17). “The Scripture cannot be broken” (John 10:35). The Lord rebuked the Pharisees for their hypocrisy and corrected the error of the Sadducees by the Scriptures. Christ and the Bible stand together as the Living Word and the written Word of God.

The Proof of Inspiration Internal Evidence

The verbal inspiration of the Bible is also established by the stress placed upon a tense or word used. The writer of Heb 12:27 establishes the fact of future judgment by quoting the words, “yet once more,” from Haggai 2:6. The Lord Jesus proved the truth of the resurrection by reminding the Sadducees of the tense used when God spoke to Moses, “I am (not I was) the God of Abraham…” (Ex 3:6). In Gal 3:16 the apostle Paul proved the justification by faith in Christ alone, apart from the law, by drawing attention to a singular form, seed and not seeds (Gen 13:14; 17:8).

About 40 persons from different walks of life and over a period of at least 1600 years were used in writing the Bible. The book of Job is one of the oldest if not the oldest of books in existence today. But even the last book written in our Bibles is almost 2000 years old. At one time, scholarly men ridiculed the claim that writing was in existence in the time of Moses, but archaeological discovery proved that writing was in existence even earlier. This fact is indicated in Job 19:23.

Since the Bible is an ancient book, there is ample evidence for its genuineness. Most of the classical writings of men are read “Y accepted on the grounds of a few existing manuscripts. Yet, there are in existence more than 3,000 manuscripts of the New Testament as well as many quotations found in writings of Christian leaders from 100 AD onward. Internal evidence abounds as to times and countries, rulers and offices, laces and persons, circumstances and conditions. Over and over again the critic has been silenced by fresh archaeological evidence. Down the centuries the enemies of the Bible have sought to destroy it; infidels have scoffed at it; critics have sought to undermine it. Yet, the Bible remains, for it is the Word of God, which liveth and abideth for ever. No book has been translated into so many languages and dialects, for it is the Word of God to all nations. Its message is for all men, at all times, whatever their background, nationality, culture, language or standing (Matt 28:18-20; Mark 16:15; Luke 2:10). However ancient, the Bible has a voice for us today. Its divine teachings as to moral and spiritual conditions are timeless, and we do well to take heed to them.

Although the Bible consists of 66 books written by 40 different persons over approximately 1600 years, yet there is wonderful oneness. That is why it is referred to as the volume of the book (Psa 40:7; Hebrews 10:7) and The Scripture (Dan 10:21; John 10:35; 2 Pet 1:20). It is also called the Scriptures (Matt 21:42; Mark 12:24; Acts 17:2), for each part has the same character as the whole and has its unique message. Each part is essential to the whole Bible, and each part corresponds with the rest, unfolding the ways and will of God. The orderly progress of doctrine is clear evidence of God, in His own time, unfolding the wonderful story of redemption. It is so profound that its teaching cannot be exhausted (Job 11:7; Romans 11:33), and yet its message is so simple that a child can understand and accept it (Mark 10:14-15). Such is its structure that its message is an enigma and foolishness to the wise of this world, because it cannot be grasped by human intellect (1 Cor 2:14), yet it is revealed to “child like faith” (Matt 11:25-26; 1 Cor 1:18-21). There is a diversity within its pages as to style and literature (allegory, law, lyric, parable, poetry, prose), but all contribute to one harmonious volume with one theme running throughout its pages. This wonderful harmony can never be explained apart from the fact that there was One Mind behind the writing of the Bible. This in itself proves its inspiration.

There is one main theme in the Bible: Christ and the work of redemption. This theme is developed progressively, thus making the whole Bible necessary to understand fully the greatness of Christ and His redemptive work. The Old Testament Scriptures tell how God created man, of his rebellion, fall and God’s promises. It tells how God took one man, Abraham, and then one nation, Israel, delivered them from bondage and gave them the law. It recounts their failure and the many prophecies concerning the Messiah and the coming Kingdom. Throughout these Scriptures many pictures and illustrations are given of the coming Christ, of His redemptive work and His glories. In the gospels of the New Testament the pictures and illustrations of the Old Testament concerning the Messiah became facts. Prophecies were fulfilled. All of this proved that the Lord Jesus Christ was the Messiah, the Son of God, the Savior who gave His life a ransom for all (1 Tim 2:5-6), and who rose triumphant from the dead.

The rest of the NT tells of the spread of the gospel message and the doctrine of Christ and His redemptive work. The last book of the Bible unfolds the end result of the wonderful redemptive work of Christ for those who believe and the eternal doom for those who despise that work by rejecting Christ. One harmonious theme can be traced through the entire Bible.

No attempt is made to avoid truth in its pages, however unpalatable it may be. Unlike human productions which so often assume, suggest and suppose, the Bible asserts, states and speaks with authority. It does not entertain the reasoning, opinions or theories of men, but demands from men unqualified acceptance of its statements and unhesitating obedience to its commands. It plainly states the origin of sin (Rom 5:12), the deceitfulness of man’s heart (Jer 17:9), the ruin and guilt of humanity (Rom 3:19,22-23) and the inability of man to fit himself for heaven (Rom 5:6). It not only reveals the wickedness of the ungodly but also unfolds the sin and failure of the chosen people and the servants of God. It never covers over the true facts or seeks to flatter any, which is clear proof that it is not the product of mere men.

It shines uncompromisingly into the hearts and consciences of men, exposing sins of every kind, bringing about conviction by the truth it states. It not only brings conviction and the blessing of salvation to all who accept its truth, it also produces holiness in the lives of all who receive and practice its teaching. It is a holy book, and sinful men hate it, ridicule it and reject it because it condemns their manner of life.

The plain and accurate statements of the Bible on true scientific matters (not speculative science), long before the comparatively recent discoveries of scientists, prove its divine inspiration: light apart from the sun (Gen 1:3), the significance of blood to physical life (Lev 17: 11), the earth being in space (Job 26:7), the cycle relative to rain (job 36:27-29), the motion of light (Job 38:19 – the way not the place), the global shape of the earth (Prov 8:27, Isaiah 40:22) and the wind circuits of the world (Eccl 1:6).