He had been held as hostage for almost 4 years. Not once during those 44 long months did the American, Frank Reed, see the face of one of his captors. In describing the pain of his experience, he relates, “I began to realize how withering it is to exist with not a single expression of caring around you. For the first time I began to fear dying alone in this awful place with no trace of personal concern”

Frank Reed’s acknowledgement is the silent ache in many hearts around the world. Although not held captive by chains as he was, people are groping in their loneliness and isolation for someone to care. Consider the struggling businessman who has to declare bankruptcy. Who cares? Or the single parent who is trying to keep the family together despite growing pressures at work. Who cares? Or the teenager who finds nothing to live for and has now turned to drugs. Who cares? We pretend it really doesn’t affect us, but inside we’re alone, desperately alone. We hope that someone will notice our plight or hear our cries, but at the end of the day, the traffic keeps swirling past us. Like the psalmist (Psalm 142:4), we cry out, “No man cared for my soul.” Yes, life can be tragically empty.

Does anybody care? Yes! The amazing fact of the Bible is that God cares. No one is too insignificant for His concern or too distant for His care. God’s great delight and purpose is to bless individuals and to bring them into relationship with Himself. As proof of His love, God sent His Son as the Saviour of the world. The Lord Jesus came “to heal the broken-hearted, to preach deliverance to the captives, and recovery of sight to the blind”. His life was characterized by tenderness and sympathy as He moved among men. Touched by the grief of death, the Saviour stands and weeps by a tomb. Graciously, He stops His travels as a poor blind beggar calls for mercy. Undaunted, He sails through a raging storm to meet one wild and hopeless man. No one was denied His care or was exempt from His kindness.

But how much does God care? Are there limits or conditions to His compassion and interest? To answer that, look at Calvary, for it’s the Cross that reveals the depths of God’s love for us. “God so loved the world that He gave His only begotten Son, that whosoever believeth in Him should not perish but have everlasting life”. It was there that the Substitute identified with our sin and paid the debt of our sin. As Peter could write years after Calvary, “Christ … once suffered for sin, the just One for us the unjust ones” (1 Peter 3:18). Because the work has been finished, the gracious invitation goes out to all, “Come unto Me, all ye that labour and are heavy laden, and I will give you rest.” To accept His offer of love is to find peace and security in a troubled world. God’s salvation brings you into relationship with a Friend and a Saviour who has said, “I will never leave you nor forsake you.” We don’t have to live alone and we don’t have to fear dying alone.

Who cares? God does! Little wonder that Peter could write, “Casting all your care upon Him, for He cares for you!” It does matter to Him about you. 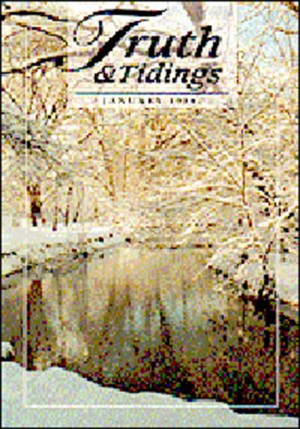