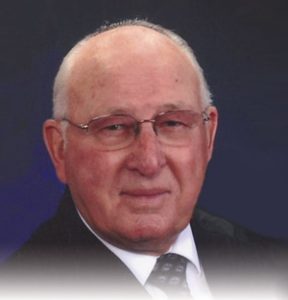 Roy Weber, the Lord’s servant and faithful evangelist for over 40 years, was called to his heavenly home on September 9, 2020, at 91 years of age.

At the age of 18 God began to speak to Roy. The Weber family was attending tent meetings held by Leonard DeBuhr and George Gould in Parkersburg, Iowa. One night, one of the preachers spoke on the subject of the great white throne in Revelation 20. If one’s name was not found written in the book of life, he was cast into the lake of fire. This stirred Roy to a deep conviction of his own sin. The very next morning he was hurt in a tractor accident and had to see the doctor. Returning to work, he had another slight accident which brought him back to the same doctor. He said, “This is your unlucky day.” Roy thought, No, Doc, this is my lucky day; God is speaking.

Several days later the Weber family enjoyed a picnic in the town park. A little boy lit a firecracker and started a fire. The fire department was called and the fire put out. Roy thought, That’s one fire that man can put out, but no one will ever put out hell’s fire. That very night, Romans 5:6 was preached. Going home, he said to his friend Richard, “What was the last part of that verse that talked about being without strength?” When he was told it was “Christ died for the ungodly,” it appealed to Roy this way: I could never live to the standard of God, so I must be the ungodly one. Right there, God revealed to Roy the substitutionary work of Christ for him, and peace came to his soul.

Several weeks later, Roy told Mr. DeBuhr that he was going to visit the George Frey home. Leonard said that their son Leroy wasn’t home. With a smile Roy said, “I’m not interested in seeing Leroy.” He had his eye on a partner for life. In August 1949, Ann Frey became his wife, and they began farming east of Stout, where they were blessed with six children.

It was soon evident that Roy’s deep interest was not only in the assembly but a love for souls. Cattle buying took him to Burwell for several years. His burden for souls increased to the point he could no longer go to Burwell just for cattle because he was interested in reaching the souls of men. Roy’s desire was to, in the words of Paul the Apostle, “preach the gospel, not where Christ was named, lest I should build upon another man’s foundation” (Rom 15:20 KJV).

In 1975, several Stout brethren walked the streets with tracts, discovering a listening ear in many people. The following year the very first gospel tent was pitched with Roy, Robert Orr, Talmadge Southard and Richard Van Mill preaching. Robert relates that a dozen were attending nightly. Tim McCalley, Tom Stickfort and Scott Hayes had children’s meetings. Roy was a leader and, in the words of Tom Stickfort, “he made things happen.”

In the spring of 1978, the old post office was purchased, which required major renovations to convert it to a suitable place for meetings along with living quarters for the gospel workers. By now, Roy felt the Lord’s guidance to “sell the cow and burn the plow.” In 1980, the Stout assembly commended our brother to full-time service in the gospel.

From 1977 to 1990, Roy shared summer and winter meetings, most of the time with Robert Orr, another faithful Iowa evangelist. During these 14 years, the tent was in Burwell, Nebraska, every year. These years proved to be fruitful as God worked and several professed salvation.

The assembly was formed in 1983 with nine gathered to the Lord’s name. The circle of gospel interest soon developed in the neighboring towns of Bassett, Ericson, Ord, and Thedford, where family members of those professing lived.

In 1981, Roy and Eric McCullough were setting up the tent in Atkinson in 110-degree temperatures. They had trouble setting the center pole. The brethren sat down to rest, and while catching their breath a gust of wind blew the tent top up. Quickly the two men easily slid the center pole in place. Eric turned to Roy and said, “Were you praying?” The many who know Roy would not have been surprised to hear him say his favorite phrase, “It’s quite a thing.”

Nebraska wasn’t the only place where Roy left his mark. In recent years he worked with Jerry Jennings and others, with blessing in the gospel in Oregon, Iowa and Wisconsin. As Jerry relates, his warm spirit removed any hostility that others might have had against the truth of God.

Many younger men today can testify to Roy’s genuine care to not only encourage them to be active in the gospel but to see them develop in the Scriptures. Every summer children’s meetings were held, bringing these young men together.

Roy was an example in family life. His devoted wife, five sons and one daughter, and eighteen grandchildren were a high priority to him, and he often made long-distance trips home for family functions.

He was an example in his approach with men. In the years working with Uncle Roy (totaling 90 preaching weeks), I watched his patience with people with admiration. More than once I wished that Roy would say something. But in his wisdom he was letting the just-quoted verse sink in. In his visitation with the ranchers, being a good farmer himself, he was slow to speak of his accomplishments unless asked. Like his daughter-in-law Rhonda said, “Knowledge speaks but wisdom listens.”

Because he was called to preach Christ, he stayed away from assembly problems. One Canadian overseer told me, “We like it when Roy comes. He brings no problems with him, he creates no problems while here, and when he returns home he leaves no problems for us to fix.”

Roy and Ann were a godly devoted example in their commitment to all activities of the assembly. They spoke often of the prayer meeting and the joy of getting together to pray. Two nights after Roy’s home call, the entire family was together. Ann said, “Tuesday we have a funeral. Can we have a prayer meeting now?” Two of the sons prayed; the others wept.

His last message was August 2, 2020, in a place that he truly loved, the Stout Gospel Hall. He did the work of the evangelist, finished his course and kept the faith. Henceforth there is laid up for him a crown of righteousness (2Ti 4:5-8). 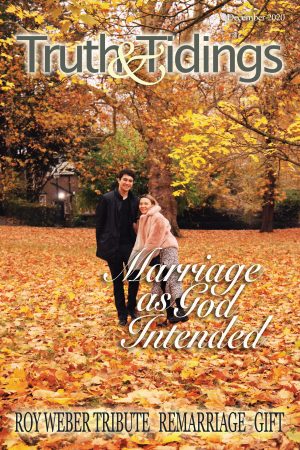