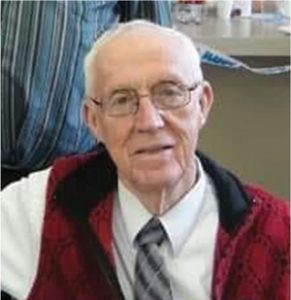 Carl Payne was in his late twenties when in August 1960, the gospel boat, “M.G.M.,” tied up at a wharf in Parsons Pond, Newfoundland. Carl heard the gospel preached in the open air from the deck of the boat and then in a rented building. One night in the first week of September, thinking of himself in the words of the Lord Jesus, “I came not to call the righteous, but sinners to repentance,” Carl admitted he was the one Christ came to save. Sitting on the side of his bed in the dark, he said to himself, and to the Lord, “Jesus came to die for bad people. That’s me. Then that means He died for me!”

He was the first one saved in meetings there, but soon after, his wife Annie, his father and brother, and many others of his family connections were saved and were part of the new assembly at Parsons Pond when the breaking of bread was first held there in December 1961. They had never seen a breaking of bread until they participated in it, and it had a profound effect on Carl. From then on, he was committed to the Scriptures, to the gospel and to the assemblies of God’s people.

He was willing right from the start of his Christian life to help out in the work of the gospel when he could. Annie was right with him in that desire. In 1967 he assisted in the beginning of the work in Templeman, and from then on was involved in the work of the Lord in other places. He was commended to full-time service in the Lord’s work in 1970.

Matthew 9:36-37 is very clear when the Lord Jesus Christ told His disciples to pray for laborers to be sent forth into the harvest. Carl Payne was a laborer. He sawed lumber for building gospel halls and other building projects. He assembled thousands of Kember texts in the sawmill building he made for the work of the Lord. Those texts were distributed all over Newfoundland and Labrador. He drove a bus to pick up people for meetings, preached the gospel, and then took them home after the meeting. He was involved in outreach work in many parts of the province, and people in some of those places became part of newly formed scripturally gathered assemblies.

One of his major commitments in the work of the Lord was to open-air preaching and distributing literature. He made a school bus into a “Bible Bus” that was known on the Great Northern Peninsula, the southwest coast and the south coast of the province, as well as the central part of Newfoundland. He, and those who helped him, visited house to house with tracts, texts and Bibles. The bus was like a small bookstore to which people came to get good scriptural gospel literature at no cost.

Everyone in his hometown knew and respected Carl and his wife, even though they didn’t all want the gospel. They knew him before he was saved and after. Every year he visited all the homes there at least once. In villages where there was an interest shown in the gospel, he returned over and over to visit and present the gospel. Sometimes he met with families in their homes, and in some places, he had tent meetings and meetings in buildings. He kept at the outreach work of the gospel all his life.

Carl’s wife, Annie, died at a comparatively young age. A few years later he married Gertrude, who also was with him in the work he did for the Lord until age and sickness caught up with them. He had been dealing with cancer and heart trouble for quite a few years, but his heart was still committed to outreach in new places with the gospel. So, when they could no longer use the bus, they packaged gospel literature and sent it through the mail.

When he could hardly communicate on his dying bed in the hospital, he wanted to be sure that any bills that needed to be paid had a gospel tract in with the payment.

A vision for the souls of people comes from the Lord. When Carl Payne realized others had a vision for the ripe harvest fields and came to his village, he wanted to use his life for the Lord in a similar way. His personality, gift and location were all suited by the Lord of the harvest for the place where Carl did most of his laboring. Enthusiasm and hard labor go together in the work of the Lord. Our beloved brother, Carl Payne, had both. No one can take anyone else’s place, but there is plenty of room in the harvest field for those who are willing to work for the Lord. One wrote, “Work for the Lord! The pay isn’t much, but the retirement plan is out of this world!” Carl Payne has moved on to a whole new area of life and service.

The multiplying principle is a practice that assures the maintenance of the work of God. One person teaching others the things that have been passed on to him, and others teaching those same things to others, enables the work of God to expand and reach the world. Hardship for the sake of our Lord has been the experience of believers from the early Church until now. Courage, commitment and devotion to duty instead of pleasure-seeking characterize those who rise to the challenge of divine service. Like soldiers, we have to give up worldly security and endure severe discipline by being willing to sacrifice to achieve the result we want – victory for the King.

“Thou therefore endure hardness, as a good soldier of Jesus Christ …. And if a man also strive for masteries, yet is he not crowned, except he strive lawfully. The husbandman that laboureth must be first partaker of the fruits …. Study to shew thyself approved unto God, a workman that needeth not to be ashamed, rightly dividing the word of truth …. And the servant of the Lord must not strive …” (2Ti 2:3,5,6,15,24 KJV).

The Lord Prays for His Own: John 17
Gustafson, Walter N.

A Song for the Church: A New Relationship in Christ
Coleman, Ryan

Principles of Leadership from Nehemiah: The Challenges of Godly Leaders
Harper, Stephen

Unnamed Heroines of Scripture: The Widow of Zarephath
Labbe, Donald

Q&A Forum: Why was the Lord about to kill Moses in Exodus 4?
James, Joseph