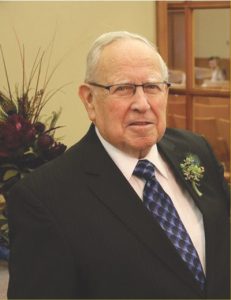 On January 23, 2020, our esteemed brother Eric McCullough (aged 94) of Cedar Falls, Iowa, was called home into the presence of the Lord and Saviour whom he loved and served diligently for over 60 years in full time capacity. He has now entered his longed-for rest.

Eric Stanley McCullough was born in Truro, Nova Scotia, Canada, on August 2, 1925. His father, James, was commended in the Lord’s work just prior to WWI by the Matchett Street assembly in Belfast, Ireland. In 1921 James married Jean Gillan of Clough, Co. Antrim, and in 1924 they emigrated to Nova Scotia to carry on gospel work there. It was here that Eric was born, and three years later his only brother James (“Gil”).

Eric wrote of those early days: “The need of salvation was emphasized in our home and I learned at an early age that I was a sinner and needed the Savior. The Bible was read after breakfast and again after supper time in our home. Looking back, I can see what a preservative this was to me. I can still hear my father praying as we bowed our knees, ‘O God, save these two boys of mine. Don’t let them go down to hell.’ Those words were indelibly written on my mind and would often be recalled.”

The family returned to Northern Ireland for a visit in the years 1937-1938. Summer was spent on the family farm at Clough, and then they moved to Bangor, where the boys went to school. Mr. David Craig (Scotts Davy) had gospel meetings in the early part of 1938 in Central Hall, and Eric came under conviction of sin.

In his own words: “Finally the last night came, and I left the hall burdened about my sin. One of my friends noticed my concern and said, ‘Why don’t you talk to Mr. Craig?’ So I did. We went into a Sunday School room at the front of the hall that had small chairs for the children in it. He opened his big Bible and read a number of verses to me that I could have quoted. Finally he said, ‘We will pray,’ and he prayed for God to save me and we left for home …. In the morning when my mother came into the bedroom, she said, ‘Eric, are you saved yet?’ I remember saying, ‘No mother, but I would like to be.’ She opened a little Bible that was on the dresser to Isaiah 53:5 and said, ‘Read this and put your name in it.’ I read it like this: ‘But He was wounded for my transgressions, He was bruised for my iniquities: the chastisement of my peace was upon Him.’ I didn’t have to finish the verse, as for the first time it dawned on me that when Jesus died, He had suffered for all my sins, and the burden was gone. I had read that verse many times before, but for the first time I realized it was true because God had said it. That was the happiest day of my life. It was March 14, 1938.”

The family returned to North America, settling in Bridgeport, CT, though the family often returned to the Maritimes during school breaks, as his father continued in gospel work. Eric graduated from Stratford High School in 1942 as WWII raged, and he became an American citizen in 1944. Drafted into the US Navy, he served the rest of the war in the North Atlantic, receiving an honorable discharge in June 1946.

After careful studies in Chicago, IL, Eric became a Doctor of Chiropractic. Here he met the love of his life, Jean Kennedy, and they married on October 28, 1950. The Lord led them to Cedar Falls, Iowa, where Eric established a chiropractic practice from 1951 to 1957.

Deeply exercised about sharing the gospel in a fuller way, he heard the call to full time gospel work in 1957. He would recall the last check from his practice that he deposited in the bank as he launched forth. He was 32 years old. For 62 years he would go on to prove the practical faithfulness of our God in supplying every need. Jean was behind him 100 percent in their work for the Lord until her homecall on November 6, 2014. Eric missed his lovely wife sorely, saying her loss was like losing his right arm.

The most fruitful of many series of gospel meetings he engaged in was with Leonard DeBuhr in Stout, IA, in 1959. The believers refer to it as “the ‘59 Revival.” They began in October and continued for 19 weeks, and about 50 precious souls professed to be saved. As the Lord graciously gave nightly help, Eric would recall, “It was like you could preach from the back of the hymnbook.”

Many gospel series followed through the years, and his ministry took him to all parts of North America and to five continents of the world. In a coming day many will arise and call him blessed for having brought the gospel to them. Eric was fearless in declaring the truth as he saw it, and he had a great grasp of the Scriptures. He was accomplished in Bible Readings and was skilled in keeping the conversation moving without allowing it to be bogged down. His ministry was clear and easily understood, and often his style was to expound a theme running through an epistle, or to take up a Psalm and expound it to profit in application to our day. The work in Iowa, Wisconsin and further afield will greatly feel the loss of our highly esteemed brother, and one wonders where others will come from to fill up the ranks.

An estimated 700 people attended his visitation and funeral, a testimony to the great respect in which he was held by many. His memory is cherished by his five children and their spouses, along with 14 grandchildren and 15 great-grandchildren. He loved them all deeply and they loved him. Please pray for the family’s comfort in the prospect of our Lord’s soon return and the great gathering home in the morning.

“In thy presence is fulness of joy; at thy right hand there are pleasures for evermore” (Psa 16:11 KJV).