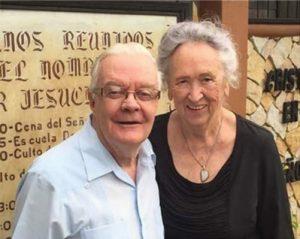 In the early hours of September 20, 2019, Douglas Elliott Reid passed into the presence of his Lord and Saviour at the age of 88.

He was born in Vancouver, BC, on June 13, 1931, to parents who were in assembly fellowship. He was raised as an only child, as his siblings passed away in infancy before Doug was born. On August 28, 1945, when he was 14 years old, he was speaking at home with his mother who was explaining salvation to him, and he trusted in the Lord Jesus as his Saviour. He was baptized and received into assembly fellowship in September 1946.

Doug studied chemical engineering for five years at the University of British Columbia; however, he felt that the Lord was calling him to serve in Cuba. Doug was married to Kathleen in September 1955, and they were subsequently commended to the Lord’s work in Cuba by believers in the Hasting East Gospel Hall and the Abbotsford Gospel Hall. Doug and Kathleen left for Cuba on December 27, 1955, where they served the Lord for five years. After the Cuban Revolution, they left Cuba in December 1960, along with their two small children who had been born there.

After spending 18 months in Tampa, FL, the family moved to Dawson Creek, BC. Doug spent the next 10 years engaged in gospel work, principally in northern BC and the prairie provinces, labouring with various brethren.

In 1969 Doug joined Jack Saword on a trip to El Salvador to scout out the land. Doug had a desire to go to El Salvador; however, the door was closed when the government of El Salvador turned down visas due to two of his children having been born in Cuba.

Doug still felt the Lord calling him to serve in Latin America and was burdened about Costa Rica. Feeling the Lord’s call to serve there, the family left Canada in December 1972, arriving in Costa Rica in March 1973. They settled in a town called Villa Colón (later known as Ciudad Colón), approximately 23 km west of the capital city of San José. Doug and Kathleen laboured in the gospel, saw souls saved and assemblies planted until the Lord called him home on September 20, 2019, after more than 46 years in Costa Rica.

On September 20 a viewing was held in the hall with approximately 200 attending, and the gospel was preached by Kory Crawford. The funeral was held the next day with an estimated 250-300 attending. There were many from the various assemblies in Costa Rica as well as from the community. The eulogy was delivered by his son Bob Reid and was followed by the gospel preached by his grandson Johnny Marin. At the interment, a local brother spoke and reminded the believers of Doug’s words “to guard that which had been established in the work in Costa Rica.”

Over the 46 years of being in the Lord’s work in Costa Rica, Doug returned to Canada for a number of visits, but his heart was always in the country of Costa Rica.

Doug is survived by his wife Kathleen, four children, several grandchildren and great-grandchildren.