The Cart – God Breaking Out

The ark of God had been separated from its tent for around 100 years. It had settled into the Levitical family home of Abinadab following its capture by the Philistines and its subsequent return (1Sa 5-7). It seems that David considered it prudent to have the ark brought to his new capital in Jerusalem as a means of uniting and consolidating his kingdom following the death of Ish-bosheth (1Ch 13). The pomp and ceremony took a solemn turn when the symbolic presence of God (seen in the ark) was visibly manifested in response to Uzzah’s well-intentioned steadying of the ark when the oxen stumbled. David was understandably upset with the evident outbreak of God’s power, but this outbreak paled in comparison to the response of God to the curiosity of the men of Beth-shemesh (1Sa 6). The ark was left in the home of Obed-edom and sober reflection was undertaken. The cart was understood to be the problem. They had followed the Philistine mode of transport instead of the Lord’s prescription that it be carried by the Levites (1Ch 15:2). Three months of blessing in the home of Obed-edom prompted a more serious, yet joyful, king to complete the return of the ark to its tent in the city of David.

The Celebration – David Offering Up

Consecrated Levites were readied for the responsibility of carrying the ark. If there had been any levity in the first instance, there wasn’t any now. This didn’t mean that the weight of responsibility had turned the event into a sombre affair. It was a wonderful time of rejoicing and singing. The participants recognized the evident help of God as they carried the ark (1Ch 15:26). David’s response was to worship God by the offering of worthy sacrifices. He had grown in his appreciation for the significance of the presence of God. In humility he removed his kingly attire as he rejoiced and danced before the Lord among the Levites and leaders of the nation. If pride and expediency motivated David to bring the ark to his new capital in the first place, humility and worship were properly motivating him now.

The Cake – Unity with God and Blessing

With the ark safely at rest in its new home, David turned to his people who had gathered for this momentous occasion. The original goal of unifying the nation under his kingship had occurred, but now under circumstances that emphasized their collective submission to the true Sovereign.  We read that “they offered burnt offerings and peace offerings” (1Ch 16:1), and it seems that David provided the animals for sacrifice. His heart was towards his people and he desired to enable their worship and fellowship with God. As their leader, he took the opportunity to bless the nation, to call upon God for the nation’s prosperity and well-being. This appears to be the spiritual high point of the nation’s kingdom period. The whole nation gathered in unity before the Lord with its leader submitted to the authority of God. The shared goals and aspirations of the nation are expressed in the table fellowship that David enabled when he met the material needs of the people in giving each a loaf of bread, a portion of meat (perhaps from the peace offerings) and a cake of raisins for dessert!

The Cost – Division Within House and Curse

Even at this high point, the enemy was lurking. Unity in the nation was met by division in the house. David’s wife, Michal, the daughter of Saul, did not appreciate the spiritual dimension of David’s actions. She, like her father, was impressed by exhibitions of the flesh, and considered David’s leadership in the spiritual realm to be dishonouring to his position as king. David rightly judged the situation, and the man who earlier had blessed a nation passed a curse upon his wife in the home. The opportunity for Saul’s line to be incorporated into the Davidic dynasty was lost by this inability to appreciate spiritual things as Michal died childless.

The Cedar – Whose House?

David’s zeal for the Lord’s presence resulted in a desire to build a permanent dwelling place for the ark (2Sa 7). The Lord responded to this desire by establishing an everlasting kingdom in David’s name. The throne of the nation would be filled by a son of David, and ultimately by the one enthroned on the ark between the cherubim (2Sa 6:2) – David’s Lord and David’s son (Mat 22:45). David learned that God’s response to interest in His things will dwarf anything one could ever do for Him.

The Call – Bless You

What lessons can be learned? What brings about the coveted situation where blessing is enjoyed?  Leaders who care for their followers will enable a spiritual atmosphere where the presence of God is welcomed. This atmosphere will not occur when authority is imposed or when submission is forced for personal advantage. “God opposes the proud” (Jas 4:6). God has communicated the requisite responsibilities that go along with the privilege of bearing His Name. There is a burden, a weight that is felt in bearing His Name that is much different than “carting” it. Bearing His presence means God is directing our actions; “carting” His presence connotes that we are pulling Him into our actions. The presence of God among us should keep us from frivolity, yet should not dampen or diminish our expressions of joy in the Lord. Leaders are responsible for enabling the fellowship of their people with God. People living in these conditions are blessed, as their leaders are looking to God for their spiritual and material well-being.

We see the experience of the nation in 2 Samuel 6 echoed in the church at the end of Acts 4. In the face of opposition, the whole church was gathered together, and the fellowship enjoyed is unparalleled in church history. The people enjoyed the blessing of leaders in communion with God. But even then, the flesh was seen in the case of Ananias and Sapphira, and God dramatically broke out in judgment against them. May we all strive to maintain and sustain the conditions that enable blessing. 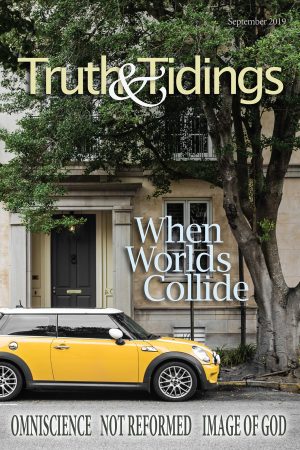