(From the Editorial Board)

It is only fitting to use this month’s editorial, although 500 words seem too few, to express our united appreciation for the many years of service that Dr. A. J. Higgins has devoted as editor of Truth & Tidings. The value of his leadership and Christ-like example cannot be overstated.

Sandy began his editorship in 1997 having already contributed as a writer for 15 years. Thus, his 37 years of contributing significantly to the magazine have spanned multiple generations. Some of our parents and grandparents benefited from his service and now some of our children are learning from his written ministry years later. We are grateful that Sandy has agreed to continue writing for the magazine, extending his service, Lord willing, to help the next generation. King David “served his own generation by the will of God” (Act 13:36). By God’s grace, the Lord has used Sandy’s ministry to bless multiple generations.

The three-fold cord of being biblical, relevant, and interesting has made his editorials, articles and books most valuable to the Lord’s people. Additionally, not being a man given to extremes, his balanced handling of sensitive topics and issues has provided helpful perspective in what have often been potentially polarizing times. Behind the scenes, his work of editing, organizing, delegating and encouraging have all been critical to the production of T and T. Above all, we are thankful for his godly example, which has given character to his ministry and credibility to the magazine.

In addition to the multicultural atmosphere of his home assembly, Sandy’s travels to Asia, the UK, Mexico and other areas have enabled him to provide a magazine meeting the needs of believers far and wide. His “Worldview” articles indeed have served the Lord’s people throughout the world.

Literally hundreds of articles, editorials and books have come from the pen of A. J. Higgins. We are blessed to have his wisdom in written form, all composed while balancing family, work and assembly responsibilities effectively. May the Lord give us more men who will with such devotion and diligence serve the Lord’s people in our generation.

We offer a final word of thanks to Sandy’s dear wife, Ruth, whose sacrifice in order that Sandy might serve us will be acknowledged with words more meaningful and precious than ours.

Your prayers for the work of producing T and T are most appreciated as we seek to serve the next generation. 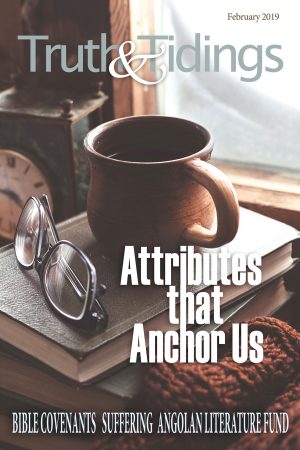 Attributes that Anchor Us: God is One
Harper, Stephen

When the Judges Ruled (1): Othniel – The Model Judge
Yade, Doug

Spiritual Warfare: The Sword of the Spirit
Joyce, Bryan

Truth in the Pastoral Epistles (13): Its Preservation (4)
Sweetnam, Mark

What God Can Do With Our Mistakes: Joshua 9
Petterson, David

The Gospel in Exodus: Bondage in Egypt
Shutt, Aaron