Seven o’clock comes too early every morning. Susan’s alarm clock rings out even earlier. She knows that the relentless duties of the day will be better faced if she has first turned her heart to God.

Susan is a busy mom. Her husband of eighteen years, Terry, is the hero of their five children. Terry leaves home very early on weekdays to catch the train to work. His responsibilities leave his arrival home time unpredictable, but usually late.

This day, Susan’s morning reading was from Psalm 34. She had always appreciated how this psalm reminded her of the joy of her own salvation, but today she was impressed with the first verse: “I will bless the Lord at all times; his praise shall continually be in my mouth” (Psa 34:1, ESV).

She glanced at the notes she had taken during a conference teaching session: “As part of those who have been constituted as worshippers, every Christian has the ability to worship God in every aspect of their life: through their person, their praise, their possessions, their piety, and their preaching.”

Susan knew that it was going to be a demanding day, but she also felt that she had the opportunity to make worship a part of everything she did.

Susan did not feel fully rested when she got up that day. The temptation of hitting snooze one more time was very great. As she put herself to the preparation of the children’s breakfast, she asked herself why she was doing this. Was it simply out of a motherly instinct? It was that, but it was more. Fulfilling this God-honoring role was her worshipful service – it was the worship of her person. Now she counted the many physical demands of her day in a different way. This was the glad giving of herself to the will of God for her as a wife, a mother and a homemaker. She wanted to do these things for His glory so that she might be used as His willing servant.

During the day she became aware of the many ways she could praise God. There was not only the gladness of beginning the day with a quiet prayer of gratitude to the One who had saved her from all her fears, but there were the times when she caught herself subconsciously humming those favorite hymns of worship. Coffee, lunch and supper all gave her time to pause and thank God for His faithfulness, and from time to time there were also those “Thank you, Lord” expressions whispered as she encountered another of His blessings to her.

Susan surveyed the room before her. She, Terry and their children lived in a comfortable though modestly furnished home. They often had to choose the less-expensive over the more-desired furnishings for the house. All around she could see little compromises between what they had as a family, and what she had always dreamed of having. Yet, even in this she was thankful. The choices they had made before God enabled her to devote her time in the raising of her own children. She had time to build a loving home in which many felt welcome. Their modest possessions were not the latest and the best, but they were yielded to the service of God. Susan could hardly wait to tell Terry how Mrs. White had reacted when she had called at her home on the way back from the mall. Susan had given her a box of groceries, a few treats, and a little money that they had saved for a gift. Mrs. White was the elderly widow of a godly evangelist who had been called home after a long illness.

Recently, Susan had been impressed with the call to good works in the life of a believer. She remembered discovering that true piety was not a holier-than-thou attitude, but that it was seen in a life of good works. She had come to appreciate that all of her daily duties could be done to the glory of God. This made a real difference when holding the nineteenth shirt that needed to be ironed. She found that it really helped her become less exasperated with the routine needs of the home when she accepted them as an opportunity to do good to someone else. True, she hoped that their mischievous little girl would learn to keep her hands off the window glass, and that their neighbor’s dog would bark less often, but these were simply opportunities to develop more grace in her character and to also show love and compassion toward others.

Susan was always glad to hear her husband Terry preach the gospel when the opportunity arose. Even before they were married, she had admired his zeal in the gospel. Terry loved the lost, and it showed in his preaching and in his efforts to bring the good news to others. While Terry did eagerly teach their children from the Bible, Susan knew that most of the opportunities to do this would fall to her. Sometimes she felt the temptation to resent the long hours that Terry’s employment demanded, because he often could not make it home in time for their bedtime. She smiled to herself as she read and prayed with the kids that night. She remembered how much it had helped when she came to understand that she, too, could be effective in telling the good news in her unique sphere. Susan was glad that she could serve God in bringing the gospel to her own children. She was also thankful for the brief conversation she had with her neighbor just that afternoon. This was the neighbor with the barking dog. The dog had taken ill, and the vet costs were very high. Her neighbor wondered if the little dog was really worth it. Susan was able to commend her neighbor’s devotion to the creature, while turning the conversation gently to the costly love of God for us.

Fifteen hours after the morning activities began, Terry and Susan settled down for a chat. As they sipped from their mugs of hot chocolate, Susan began to tell Terry how much her morning reading had shaped her day. She told him how she had been reminded of the opportunities to worship God in everything she did. Grateful that Terry was taking the time to listen, she freely admitted that there would be many days to come which would not be as consciously worshipful as this one had been. 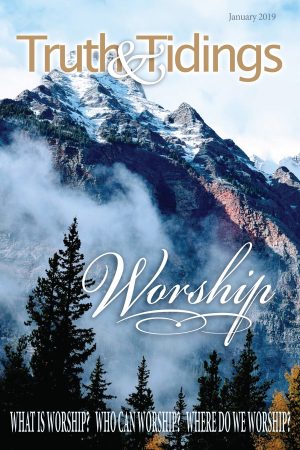 What is Worship?
Joyce, Joel

Who can Worship?
Knox, Mike

Where do We Worship?
Skates, William

Worshipping in Spirit and in Truth: Blending Doxology with Theology
Cain, Matthew

The Discipline of Worship
Summers, Alan

A Day in the Life of a Worshipper
Craig, Leslie

Transformed to be a Worshipper
Baker, Joseph