Jonah stood on the wharf in Joppa. God had sent him to Nineveh, but he wanted to go anywhere but Nineveh. Just at that point, a ship was leaving for Tarshish (1200 miles away on the western side of the Mediterranean Sea). Amazingly, there was a ticket available and Jonah had the money. God’s will? Clearly not!

Circumstances are only valid guides to God’s will in the measure they agree with Scripture. David and his men were in a cave when King Saul came in alone. David’s men saw a perfect opportunity to kill Saul, but David knew that while Saul was evil, he was “the Lord’s anointed” (1Sam 24:6, KJV). “Perfect circumstances” must be evaluated as to whether they agree with God’s Word. Jonah’s circumstances did not, but he proceeded anyway. David’s didn’t either, but he recognized it and restrained his men.

Blessing does not mean God is making an exception for sin

Ends never justify the means with God. When a famine hit Israel, Elimelech and Naomi moved back across the Jordan to Moab. This was blatantly against God’s Word. However, Ruth, a young Moabitess, got saved. Would this blessing negate or lessen their sin? Never! It only magnified the grace of God. Despite their sin, God mercifully saved a Moabite.

If a believer dates an unsaved person and the unbeliever gets saved, does that minimize the disobedience of the believer (2Cor 6:14)? If I burn my neighbor’s house down, do my criminal and assembly responsibilities disappear if, by seeing the flames, my neighbor becomes troubled about his sin and gets saved? God’s grace in blessing should never be misinterpreted that He is overlooking or minimizing sin.

Ability does not equate to spirituality

No one enjoys listening to a boring speaker. However, ability is not spirituality. True spirituality is when someone is empowered by the Spirit to do something Scriptural (Luke 4:1). Thus, monotone Jonathan Edwards read his “Sinners in the hands of an angry God” sermon and souls repented. Little David confronted gigantic Goliath and won. Even Paul said, “My speech and my preaching was not with enticing words of man’s wisdom, but in demonstration of the Spirit and of power” (1Cor 2:4, KJV). God values faithfulness and dependence over ability, charisma, and results. Do we? Or, do we place men on pedestals for their ability, humor, or how they make us feel?

God once used an unclean donkey to speak to Balaam. He then used unsaved Balaam to bless Israel. God is sovereign and He can use any instrument He chooses. When a man’s sermon touches us or souls get saved, we think God’s stamp of approval is upon him because we judge by results. However, God’s sovereignty does not always indicate his approval.

So easily we glorify human ability, usefulness, and results and we miss God’s sovereignty, mercy, and grace. No wonder Paul said, “We are asking God that you may see things, as it were, from his point of view by being given spiritual insight and understanding” (Col 1:9, J B Phillips New Testament). May God help us to have 20/20 spiritual vision and not misjudge our Maker. 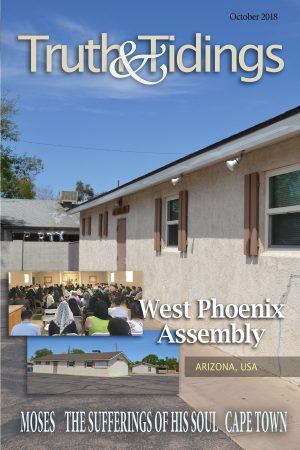 The Person of Christ (54): His Unconditional Lordship (6)
McAllister, David

Truth in the Pastoral Epistles (10): Its Preservation (1)
Sweetnam, Mark

The Sufferings of His Soul
Gustafson, Walter

We Are Not Ignorant: Worldly Wisdom
Robinson, Paul

Go Ye Into All the World: South Brazil
Carswell, Lindsey

Whom Shall I Marry? (2)
Parmenter, Eric

The Gospel in Revelation: The Last “I Am”
Thibodeau, Brody