During David’s exile, his son Absalom revolted against him, necessitating David’s flight from Jerusalem. He feared for his life and the destruction of Jerusalem, should he remain in that city. Perhaps he thought that by doing so, he would avert civil war and bloodshed. David’s servants and royal guards demonstrated their great love and loyalty by following him into exile. Finally, he reached the cave of Adullam. Let us consider five interesting issues.

“And David longed, and said, ‘Oh that one would give me water to drink, of the well of Bethlehem, which is by the gate’.” Nothing could compare with this water. He issued no command. No one was singled out or commissioned to go. It was his simple request and a deep longing that provided the opportunity for these men to demonstrate their genuine affection and true devotedness. This is somewhat similar to Romans 12:1. “I beseech you,” and again in 2 Timothy 4:9-10, “Do thy diligence to come shortly unto me; for Demas has forsaken me.” This request was made in the context of Paul’s departure. “I am already being offered and the time of my departure has come” (v6, RV).

“And the three mighty men broke through the host of the Philistines, and drew water out of the well of Bethlehem … and brought it to David.” The simple longing of the heart of the king was sufficient to prompt them to overcome all obstacles. Without considering their safety, their desire was simply to satisfy their king. Affection, more than ability, was fully tested. No amount of danger was able to frighten them. Their unhesitating response was to satisfy the longing of their sovereign.

Similarly, Philippians 2 highlights noble acts of selfless sacrifice. The Lord Jesus (vv5-11), the supreme example of selfless love, stoops from the heights of Godhead glory, eternal majesty, and manifests equality with God, to the lowest depths of shame and suffering in the death of the cross. The remainder of the chapter presents three men displaying devotion and service to others. In each of them the mind of Christ is delightfully developed and demonstrated.

Paul (vv17-18): “If I be poured out as a drink offering upon the sacrifice of your faith, I joy and rejoice.” To this end, Paul labored and toiled, selflessly and sacrificially, “that the offering up of the Gentiles might be acceptable.”

Timothy (vv19-24): “I have no man likeminded who will genuinely care for your state.”

Epaphroditus (vv25-30): “For the work of Christ he was nigh unto death, not regarding his life, to supply your lack of service toward me.” “Because of the work of the Lord, he came close to death, not regarding (hazarding) his life to supply what was lacking in your service.” He was willing to carry their gift to the apostle, even if it meant endangering his own life.

“But he would not drink thereof, but poured it out unto the Lord.” C. H. Mackintosh has the following to say about this action: “It was a sacrifice too costly for any save Jehovah Himself, so David would not allow the sweet odor of it to be interrupted in its ascent to the throne of God.” This reflects the teaching of the drink offering, offered for the pleasure of God. The Christian antitype of the drink offering is found in the attitude of Paul. In Romans 12:1, he appealed to the believers to “present your bodies a living sacrifice.” The ideal of spiritual self-sacrifice as a whole burnt offering, which Paul had set before the Roman believers, had been attained by the Philippian assembly. He carried his striking metaphor still further. Because of his joy at their spiritual attainment, Paul wrote, “If I am offered (poured out as a libation or drink offering) upon the sacrifice (burnt offering) and service of your faith, I joy and rejoice with you all” (Phil 2:17 , KJV). This was the expression of complete joy and appreciation, and at the same time, the culmination of the sacrifice. Paul considered the service and sacrifice of the Philippians as the greater offering (the burnt offering) and his life and service as the smaller offering (the drink offering) which was poured out.

In like measure, we are also able to find joy and delight in the devotion of our fellow-believers. In a higher sense, the libation must ever present the thought of the believer’s joy in the devotion of the Lord Jesus Christ. His was the ultimate holocaust, and in Him alone we may find our complete joy.

A reward was never the reason or motivation for the actions of David’s servants and royal guards. Pure and unalloyed affection and devotion for David moved them. Such unselfish, self-sacrificial loyalty to David was ultimately recognized. It is not a question of working for rewards, for a crown, or for a place, although such things have their rightful place in Scripture. Anything done for Him, and in His Name, will be suitable, and eternally rewarded. The Lord Jesus said in Matthew 10:42, “a cup of cold water, given in My Name, will not lose its reward.” As Paul reminded Timothy, even in days of abandonment, the reward is sure. “Henceforth there is laid up for me a crown of righteousness which the Lord the righteous judge will give to me on that day, and not to me only, but unto them also which love His appearing” (2Tim 4:6-8, KJV).

Those three mighty men could never have imagined their act of loving devotedness would be recorded on the eternal page of divine inspiration and read by untold millions of people down through the ages of time. 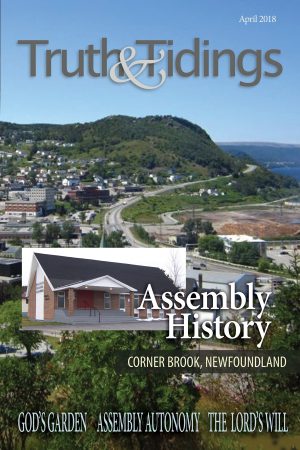