There are many Scripture references to what we have flowing from the resurrection, but the epistle to the Romans is particularly rich in this regard, so we will base our study on it.

“Who was delivered for our offences, and was raised again for our justification.” The Lord Jesus was “delivered,” to die. The word twice translated “for” in this verse is dia, which normally means “through,” and here refers to the reason for the event. He was delivered because of our offences, and raised again because of our justification. It was on account of our sins that Christ died, and God is fully satisfied with the work He did on the cross. How do we know that God is satisfied? By His resurrection – He was raised again on account of our justification. That is, His resurrection is the confirmation that God has accepted His work and is able to declare righteous whoever believes, as verse 24 states: “But for us also, to whom [righteousness] shall be imputed, if we believe on Him that raised up Jesus our Lord from the dead” (KJV). So one blessed consequence of the resurrection is that it gives us total confidence that we are justified in the sight of God.

Not only is the resurrection that which confirms the efficacy of the work of Christ; it is an integral part of the gospel message: “That if thou shalt confess with thy mouth the Lord Jesus, and shalt believe in thine heart that God hath raised Him from the dead, thou shalt be saved” (KJV). In order to be saved, there must be an acknowledgment of Who Jesus is – Lord – and of the fact of His death, and the reason for it. These things are vital, but there is more.His resurrection from the dead must also be acknowledged and believed. He is not a dead Savior, in the tomb, but a living Savior, on the throne. As Paul tells the Corinthians, “And if Christ be not raised, your faith is vain; ye are yet in your sins” (1Cor 15:17, KJV). As we preach the gospel, it is right that we focus on the work done at the cross, but it is essential that we do not leave sinners thinking that the One we present to them is dead; they must know that He is risen. Our salvation is dependent on it, and for a sinner to be saved, he must believe it.

The illustration from marriage which Paul uses in this chapter (vv1-3) is interesting, and would take some time to look at in detail. The conclusion, however, is evident. The death of one spouse discharges the other spouse from any obligations under that marriage, and leaves him or her free to be joined to another.

Now, says Paul, to apply the illustration to believers, death has occurred. “Wherefore, my brethren, ye also are become dead to the law by the body of Christ” (KJV). Because of what Christ did in His body (died for us), we have died to the Law. Therefore the Law has no claims upon us, for, as far as it is concerned, we are dead. Release from that union implies freedom to be united to another: “that ye should be married to another, even to Him who is raised from the dead” (KJV). It is interesting that Paul does not just say “even to Christ,” but “even to Him who is raised from the dead.” This parallels the allusion to His death earlier in the verse. It is through His death that we died to the Law; it is because He is alive that we have been joined to Him. That new relationship is possible only because of His resurrection.

This verse (and the one preceding it) shows that water baptism signifies our union with Christ, and our identification with Him, in His death, burial and resurrection: “Therefore we are buried with Him by baptism into death: that like as Christ was raised up from the dead by the glory of the Father, even so we also should walk in newness of life” (KJV). This concords with Colossians 2:12: “Buried with Him in baptism, wherein also ye are risen with Him through the faith of the operation of God, who hath raised Him from the dead” (KJV). This is not referring to our future bodily resurrection (the subject of a future article), but to our present life as believers. Christ’s resurrection means we have entered a life which we did not have before, the practical consequences of which will also be considered in a subsequent article, in the will of the Lord.

This verse is part of a wonderful section of the epistle, in which Paul reassures us that our future is secure. “We shall be saved from wrath through Him”(v9, KJV). His argument culminates in verse 10. “For if, when we were enemies, we were reconciled to God by the death of His Son, much more, being reconciled, we shall be saved by His life” (KJV). Since Christ’s death was able to bring about our reconciliation to God when we were His enemies, we need have no fear for our eternal security, now that we have been reconciled to Him. His resurrection life ensures this. It is not the life He lived on earth which is in view here, but the life He now lives, risen from the dead – the life described in Hebrews 7:25: “Wherefore He is able also to save them to the uttermost that come unto God by Him, seeing He ever liveth to make intercession for them” (KJV). We are indeed blessed to know that we are safe eternally, and our Savior’s resurrection is the guarantee of that. 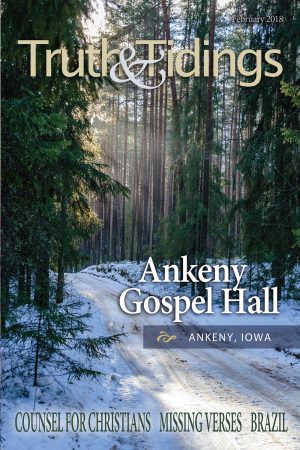