Unflatteringly, the Bible describes us as sheep, not only in our unregenerate state (Isa 53:6; 1Peter 2:25), but as believers in the Lord Jesus (Matt 10:16; John 10:27-28). We might prefer to be described as powerful creatures, such as horses or lions, or as graceful ones like the gazelle. Most accurately, God’s Word says we are like sheep.

Perhaps the most descriptive word for a sheep is the word dependent. Sheep wander and are totally defenseless. They need a shepherd. When we were in our sins, we needed God, and we needed His Son. Peter wrote that “ye were going astray as sheep, but have now returned to the Shepherd and Overseer of your souls” (1Peter 2:25, Darby).

Now that we are saved, however, God’s Word continues to describe us as sheep. Why? Because we are still dependent. Being saved does not make us less dependent on God. We are still prone to wander, and are therefore prone to danger. We need a shepherd. Thankfully, our wandering does not change the fact that we are the Lord’s sheep and eternally secure (John 10:28). But drifting away from the shepherd brings us into a realm of definite danger. A sheep’s only defense from harm is to stay close to the shepherd and to the flock. When we are out of fellowship with the Lord and isolate ourselves from fellow believers, we’re certainly vulnerable to attack.

The assembly is, figuratively speaking, referred to as “God’s flock” (1Peter 5:2). The Lord has graciously provided for us men He has equipped and raised up as shepherds within the assembly to care for us, the dependent sheep.

In Acts 20:28, Paul tells the elders in the Ephesian assembly that “the Holy Spirit has set you as overseers, to shepherd the assembly of God” (Darby). Since it is the Spirit that raises up these men, it should be no surprise that they have spiritual qualifications (listed in 1 Timothy 3 and Titus 1). Thus, the flock is furnished with men who are above reproach, have no desire to take anything from us, but rather give to us. They are hospitable and capable of teaching. Self-control, patience, maturity, and a good reputation, even by unbelievers, are to characterize these men. They are capable of caring for the needs of the assembly, God’s flock. And not only are they qualified, but they are willing to do the work (1Peter 5:2). Many needs that we have as sheep can (and should) be met by shepherds whom the Lord has furnished.

Additionally, Paul told the elders in Ephesus that the assembly they were to care for was “purchased with the blood of His own” (Acts 20:28, Darby), referring to the blood of God’s own Son. First, this phrase emphasizes just how precious the assembly must be to God, since it was obtained at such a high price. Second, the phrase emphasizes that the assembly rightly belongs to God who “purchased” it, and not to the elders caring for it. Elders are often referred to as undershepherds, for they are ultimately responsible to the Chief Shepherd (1Peter 5:4) and “will have to give an account” (Heb 13:17) of the work of caring for the sheep. It is unthinkable that the undershepherd should ever do anything that would bring harm to the sheep in his care. It is just as unthinkable that an elder would ever do or say anything that would bring harm to those sheep in his care. Shepherds don’t harm the sheep, wolves do!

The Greek word poimne is translated “flock” four times in the NT (Matt 26:31; Luke 2:8; twice in 1Cor 9:7) and “fold” once (John 10:16). But in Acts 20:28-29 (as well as Luke 12:32; 1Peter 5:2-3) we find the word poimnion, very possibly a diminutive form of poimne. This could carry the translation “little flock.” This would imply a certain unstated assembly size. It is likely that God did not intend for assemblies to have hundreds or thousands of believers within a single fellowship. It becomes a practical impossibility to “Pay careful attention to … ALL the flock” (Acts 20:28) once an assembly reaches a certain size. At that point, it might be wise to think and pray about the possibility that God may be raising up another assembly testimony.

If you are in fellowship in a small assembly, it is encouraging to think about the fact that Scripture does suggest that an assembly is indeed a “little flock.” Obviously, this is no excuse to make it even smaller by harmful actions or carelessness.

We are commanded to obey our elders and submit to them (Heb 13:17). Yet how much easier this is to do when they are leading honorable lives. In his exhortation to elders, Peter says they should be “examples to the flock” (1Peter 5:3). Sheep will be more prone to follow a shepherd who displays genuine care.

Here are some practical questions we might ask ourselves: Are we willing to be led? Do we follow the godly advice of our elders? Do we “imitate their faith”? (Heb 13:7). Do we pray that God will help them in their shepherding work?

Elders might also benefit by reflectively asking these questions: Are we consistently providing good food for God’s people (i.e., profitable, wholesome teaching)? Whether food is physical or spiritual, when it is good, people always come back for more. Do we care for “all the flock” (Acts 20:28), not just those in the flock we get along with? Are we willing to allow believers to wander away, or do we sacrifice our time and resources to do what we can to bring them back? The mindset of the shepherd in Luke 15 was to “go after the one that is lost, until he finds it” (v4).

One more reason God has instituted the assembly is to provide a place where food, direction, protection, and other blessings can be ours because, figuratively speaking, we are like sheep in God’s little flock. 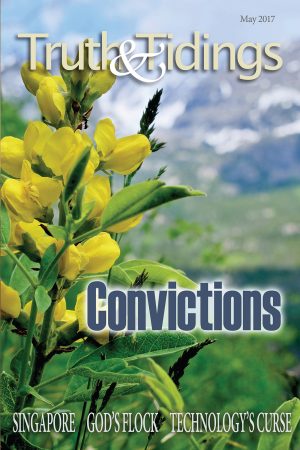