Is it really mine? Recently, sitting in an airplane watching others board, some with more bags than they could carry, a fellow passenger paraphrased a verse of Scripture, saying, “We bring nothing into this world when we are born and we take nothing with us when we die”(1Tim 6:7). Then she added, “But in between, we strive to acquire all that we can!” Reflecting on that comment brings a twinge of guilt. In reality, many of us have fallen into that western-culture mindset and have far more than we need. We often justify our acquisitions, in that we do give of our resources at times, when we have extra. And for those who live in lands of certain liberties, acquiring is a constitutional right. However, is it a God-given right?

In considering the subject of stewardship in giving, it may be enlightening to see from the Scriptures what really belongs to me. For some of us, it was Norman Crawford who taught us the value of the law of first mention in our Bibles. So, it is in Genesis 1:1 that we read these familiar yet foundational words: “In the beginning God created the heavens and the earth.” And in 1:31, “And God saw everything that He had made, and, behold it was very good.” These 31 verses record the six days of the creation of all things. This included the crown of the creation of God, man, who was made in the image of God, after the likeness of God. However, when the Lord God formed man of the dust of the ground, and breathed into his nostrils the breath of life (2:7), the man (Adam) did not rise to his feet, survey the wonder of the creation around him and say, “Mine, mine. It’s all mine!” No, his understanding was that which David would write in Psalm 24:1.“The earth is the LORD’s and the fullness thereof; the world, and they that dwell therein.” In Genesis 1:26, 28, God defined the man’s role in the world. He would “let them have dominion … upon the earth (Psa 8:5-8). Adam knew that the dominion that he had been given was not ownership, but stewardship. And he understood that the stewardship given to him was more than just preserving that which had been placed under his care. The command from the LORD was, “Be fruitful, and multiply and replenish the earth, and subdue it” (1:22). It is in these early verses of the Word of God that we learn an important principle: owners have rights, and stewards have responsibilities. We see that the man’s responsibility was not to be a consumer of all that God had given to be under his control, but to be an administrator.

Paul told the Corinthians that it is required in stewards that a man be found faithful (1Cor 4:2). Stewardship acknowledges, in practice, that we do not have the right of control over ourselves or our possessions. The Lord Jesus taught this lesson in the parable of the talents (Matt 25), where “a man” delivered (entrusted) to his own servants his goods. That an evaluation of ability (faithfulness) was made by the man is seen in the story, and accordingly, a distribution was made to three individuals. It is also understood that the man did not expect each of his servants to produce the same results. But he did expect them to be faithful with what they had been given. To some, this could be considered a test of loyalty. To others, it is seen as a time of opportunity. A present blessing is seen in the willing and active service of the two who were diligent in their investing. As with believers today, the happiest and most fulfilling days of our lives are those spent faithfully serving God. That there is a future benefit to being faithful is also seen in the words of the lord to the two at his return. “Well done, good and faithful servant: thou hast been faithful over a few things, I will make thee ruler over many things: enter thou into the joy of thy lord.” Sadly, we also learn that the lack of investing brought total loss to the servant whose interests were kept in the earth.

It would seem that an appreciation of the one who had given the talents determined the servants’ responses. It is interesting that the assessment was not made in relation to the amount returned, but rather the amount invested. This is seen on another occasion in the temple, where the Lord Jesus watched the rich men casting their gifts into the treasury (Luke 21:1-4). He also saw a poor widow casting in two mites. And He said, “Of a truth this poor widow hath cast in more than they all: For all these have of their abundance cast into the offerings of God: but she of her penury (poverty) hath cast in all the living that she had.” If they even noticed her, the crowd in the temple would have done so with disgust, as she had given so little in their eyes. But the true assessor knew the sacrifice she had made.

There is a danger of hoarding our resources as seen in 1 Timothy 6, where Paul writes (v17) “Charge them that are rich in this world, that they be not high-minded, nor trust in uncertain riches, but in the living God, who giveth us richly all things to enjoy; that they do good, (v18) that they be rich in good works, ready to distribute (give) and willing to communicate (share).” Jim Allen helps us understand these verses when he writes, “The misunderstanding and misuse of this verse (v17) among many believers is a serious matter. We are certainly not entitled to use (riches) as an excuse for vulgar ostentatious display of wealth, or the sensual gratification of luxurious taste in homes, dress, eating, or holidays (vacations) under the plea that God has given it to us ‘to enjoy’! This is almost a perversion of this Scripture. The enjoyment is obviously spiritual delight in the right use of wealth as defined in the statement of verse 18.”

The faithful steward serves only the interests of his Lord. Every believer is accountable for all that has been entrusted to him, and our returning Lord is worthy of that faithful service. 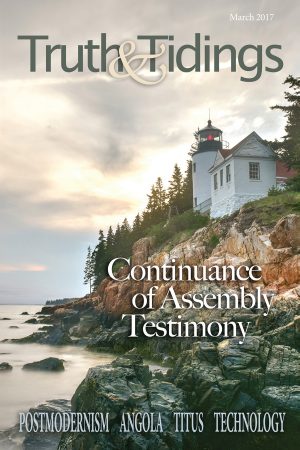