Believers’ resurrection is the subject of this great chapter.  It begins by giving the evidence for the resurrection of Christ in a two-fold way. First, the Scriptural evidence, and then the eye-witness evidence. A second section will unfold the importance of resurrection with seven hypothetical statements. The order of resurrection is then presented in three stages. In answer to hypothetical questions as to the resurrection body, a series of seven illustrations are given showing that the God of Creation has given different bodies and different glories to His work and will do so again in the resurrected body of the believer. The chapter concludes with a song of victory and a stirring inspiration for believers: “therefore, my beloved brethren be ye stedfast, unmoveable, always abounding in the work of the Lord, forasmuch as ye know that your labor is not in vain in the Lord”(1Cor 15:58).

The key to this chapter is found in verse 12: “How say some among you that there is no resurrection from the dead?” The reasoning of the chapter rests upon the physical resurrection of Christ. As to the order of resurrection, it is first: “Christ the firstfruits,” and then, “they that are Christ’s” and third, “then cometh the end.” These three are separated by spans of time.

The climax of this chapter is the wondrous event of verses 51-52. Here we have the blessed truth of the return of Christ for his own. Whether they are living or dead, whether in the body or out of the body, they are destined to be changed, to be like, and to be forever with the Lord. We note that this event is termed a “mystery.” Earlier in verse 35, there were the hypothetical questions of the skeptic, “How are the dead raised up and with what body do they come?” The questions were answered in that, from antiquity, farmers “have in faith” sown their seeds knowing that the seed would die, but a new plant like the old would arise. Farmers do not and cannot explain this, but all know the truth of it. Why, then, should it be questioned as to how God would raise up a new body for His own?

“We shall not all sleep.” The apostle Paul (as in 1Thes 4:17) includes himself in the possibility of being alive at that time. Sleep in the New Testament is used instead of death when referring to a believer. It is the body that sleeps, not the soul. For a believer “absent from the body” is to be “present with the Lord” (2Cor 5:8). While “it is appointed unto men once to die” (Heb 9:27) is a universal decree because of sin – this is the end of the old body and the beginning of the new.

This great transformation is described in three symbols:

This is the only mention of that word “moment” in the New Testament. It is the Greek word atamos, believed to be the smallest of the particles. “The twinkle of an eye.” John Gill says the Jews frequently use this to show how speedily and suddenly anything is done. “The last trump” – the apostle was writing in the days of the Roman Empire, when the lives of the soldiers were guided by the call of the trumpet.

We have then a symbol from the Greek world, the atom; from the Jewish world, the twinkling of an eye; from the Roman world, the last trump. Above the cross of the Lord Jesus there was a title written in Hebrew, Greek, and Latin: Jesus of Nazareth, King of the Jews. It might be read by the religious ones, by the commercial ones, by the military or political ones. At his death all could know Who He was. At His coming all who know Him will be changed and taken to be with Him.

Verse 54 tells us that “then” shall be brought to pass the saying that is written: “Death is swallowed up in victory.”  Yet verse 55 shows us that “now” the believer can sing, “O death, where is thy sting, O grave where is thy victory?” 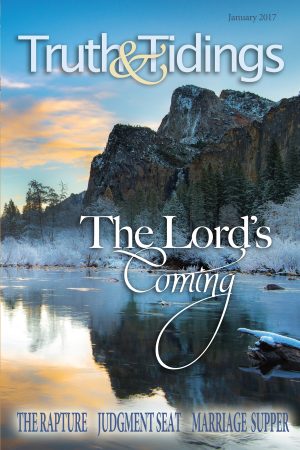