Following his stay in Athens, Paul targeted the decadent port city of Corinth. God was a step ahead and already had in place a couple who would heartily cooperate with this pioneering venture. The timing of their coming was perfect: “lately come from Italy” (Acts 18:2), just in time for Paul’s arrival. Suitable lodgings and appropriate employment were available, for divine strategy is always perfect. Seemingly “chance” encounters are often divinely orchestrated, as with Abraham’s servant and Rebekah (Gen 24:15), Boaz and Ruth (Ruth 2:3-5), and Elijah and the widow (1Kings 17:10). Be alert and sensitive to His leading, quick to detect openings He creates for you.

God is wonderfully kind. Silas and Timothy were still in the north, so Paul arrived in Corinth unaccompanied (Acts 18:5). The welcome from Aquila and Priscilla preserved him from a repeat of the desolation he had experienced in Athens (Acts 17:15; 1Thes 3:1). In an alien culture, a cesspit of iniquity, he found kindred spirits. He shared the psalmist’s experience. “I am a companion of all them that fear Thee” (Psa 119:63). The warmth of fellowship and mutual support cannot be overestimated.

The blatant anti-Semitism that uprooted Aquila and Priscilla from Rome must have appalled them, yet, with hindsight, they would have traced the hand of God in their lives. It brought them into contact with the apostle and forged links in God’s service that would survive until his martyrdom (2Tim 4:19). As a married couple, their lives hold valuable, oft-repeated lessons for believers today, because they are fundamental to Christian marriage. Aquila and Priscilla are never mentioned independent of each other; they had no separate agenda, no diverse interests. Wherever located, they were hospitable, which requires the cooperation of husband and wife, as demonstrated by the great woman of Shunem (2Kings 4:8-10). They were committed to the local church, and their home was opened as a venue for assembly gatherings (Rom 16:5; 1Cor 16:19). Their knowledge of the Scriptures was comparable, so that together, they were able to aid Apollos in a more accurate understanding of divine truth (Acts 18:26). These noble features should be a goal for every Christian couple.

The tent making gave Paul a source of income.  He had no scruples about using his hands to provide for his “necessities,” and if need be, or to support his fellow laborers (Acts 20:34). William Carey of India said, “My real business is to preach the gospel and win lost souls. I cobble shoes to pay expenses.” Paul plied his “craft” to pay expenses, unlike Demetrius, at Ephesus who said, “Sirs, ye know that by this craft we have our wealth” (Acts 19:25). With us is the pursuit of a career or a business with an eye to having wealth, laying up treasure for ourselves, but are we “rich toward God?” (Luke 12:21).

Paul’s activity sets a precedent for God’s servants in pioneering remotely. They can combine the functions of wage earner and preacher. Obviously, that situation is less ideal for the servant than to be untrammeled by secular responsibilities. However, in some lands, access solely as a designated missionary would be impossible, whereas a man’s presence as an engineer or a professional person would be tolerated. The tent making at Corinth gave Paul an illustration for teaching the Corinthians, when he likened our frail mortal bodies to a flimsy tent (2Cor 5:1). His subsequent appearance at Corinth’s judgment seat also gave him material for his ministry, for he reminded the Corinthians of a more august tribunal, “the judgment seat of Christ” (Acts 18:12; 2Cor 5:10).

With the arrival of Silas and Timothy, Paul abandoned his trade and became fully occupied with the Word, as some translations render verse 5. As usual, the Jews were his initial targets, but their reaction was hostile (v6). For his part, he was confident that he had discharged his responsibility to them. “Your blood be upon your own heads; I am clean.” He equally fulfilled his obligation to the Ephesians; “I am pure from the blood of all men” (20:26). He could have said as God said to the people of Isaiah’s generation, “What could have been done more to my vineyard, that I have not done in it?” (Isa 5:4).

Undoubtedly, Paul was reflecting on Ezekiel’s remit as a watchman (chs 3 & 33). When danger threatened, the watchman’s responsibility was to sound the alarm and his duty was complete; the onus was then transferred to those who heard. Similarly, a preacher’s role is to communicate the message, and in so doing, he has fulfilled his task, irrespective of the response of the hearers. The blood of the unwarned wicked is required at the watchman/preacher’s hand; in sounding the alarm, he delivers his soul (Eze 33:8-9). Paul was “clean”; what about us? “If thou forbear to deliver them that are drawn unto death, and those that are ready to be slain; If thou sayest, Behold, we knew it not; doth not he that pondereth the heart consider it? And he that keepeth thy soul, doth he not know it? And shall not he render to every man according to his works?” (Prov 24:11-12).

Justus’ home provided a new venue for Paul’s preaching (v7) with a notable Jew and his family among the first converts. Afterward, there was an avalanche of blessing. “Many of the Corinthians hearing believed, and were baptized” (v8). This confirms a Scriptural order featured throughout the book. Baptism is invariably subsequent to hearing and believing, contrary to what is practiced in many denominations today.

Paul experienced an unusual trepidation at Corinth that almost silenced him (1Cor 2:3), but God graciously intervened with encouragement. “Be not afraid, but speak, and hold not thy peace” (v9). There was the promise of the divine presence, and physical safety, and God was true to His word. Although Paul was hauled before the judgment seat, Gallio dismissed the case against him (v17). When the going gets tough, you will never have a vision to encourage you, but you will have a voice, as God still speaks through His Word. Statements of encouragement and the record of God’s dealings with others can lift us out of fear-induced inertia so that we can be busy and effective again.

The influx of converts demanded the patient, prolonged teaching of “the Word of God” (v11). The evangelist adopted the role of a teacher, and while, in a sense, the evangelist can see instant results, the work of instructing saints has to be done “with all longsuffering and teaching” (2Tim 4:2, RV). Birth is instantaneous; growth is gradual, and it was to Paul’s sorrow that the teaching at Corinth did not have the desired effect. As time passed there was still spiritual immaturity among them (1Cor 3:1). Have we proved to be a disappointment to those who have invested so much time and effort in us?

And so he moved on; a fleeting stop at Ephesus concluded his second missionary journey, and the main push there was reserved for his third tour of duty. 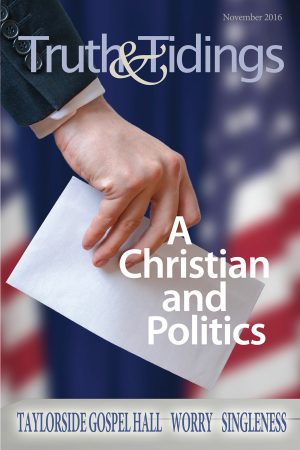