As the clouds of dust began to settle by late morning in Lower Manhattan, for survivors and eyewitnesses, “ground zero” seemed the appropriate term to describe the surreal scene that was now becoming more visible through the gray light. Only twisted steel and a literal mountain of smoldering debris were left of what had been two of the world’s tallest buildings. They had been bombed once before in 1993, but now on September 11, 2001, the iconic “Twin Towers” that had punctuated the famous New York City skyline for 28 years, were collapsed in utter ruins. More tragically, almost 3000 people, including 343 firefighters, had perished in the stunningly brazen terrorist attack on the United States. The nation was in shock.

There’s been another “ground zero” of even greater proportions. Its location is not within the measure of city blocks, but in the minds of individuals. The target has not been skyscrapers, but sacred truth; the weapons, not commandeered planes, but convincing words; the intention, not to destroy buildings, but to demolish beliefs. It has affected millions, not instantly, in one flagrant attack, but gradually, subtly, progressively, down through generations. This long history of incursion against truth has been waged relentlessly since Eden, but in the past decade, it has taken a noticeable and decidedly more confrontational turn. By its own admission, it was actually the events of 9/11 that spurred the current antagonism and rhetorical assaults to a greater fervor and pitch. Through best-selling books, lectures, debates, interviews, and the internet, its message has been maximized. While the present offensive has been capably countered and may have lost some of its initial steam, the cumulative effect has been substantial. There’s a gaping “ground zero” in the minds of many today, where spiritual truth lies in ruins.

A few weeks after 9/11, like many, still hardly believing what had just happened, I went to Manhattan with a group of friends to view the devastation firsthand. The smell of destruction was still pungent and a ubiquitous layer of dust was evident on the blocks and buildings around the entire the area. “The Pile,” as it was called, was massive and macabre, but amazingly, removal was already well underway. We watched an endless line of flatbed trucks go by carrying mangled steel girders that were painstakingly being extracted and taken away one by one. Over the next eight months of recovery, there would be many a solemn moment that would bring all the workers and heavy machinery to a halt when a body or a portion of human remains were found and respectfully removed. Behind the scenes, while tireless, 24/7 work continued to clear the site, plans were already being considered for what to build in its place. Now, many years since, a gleaming new building stands 1776 feet tall, looking down on a museum and memorial park with two large reflecting pools that are the footprints of the original towers. The bronze parapets surrounding the pools are inscribed with the names of each person who perished in the attack.

Ultimately, God’s truth cannot be destroyed or even damaged and never needs rebuilding. All truth is God’s truth and “… stands like a rock undaunted, mid’ the raging storms of time.” Scripture asserts, “Nevertheless the foundation of God standeth sure … “(2Tim 2:19). The Lord Jesus assured, “… the scripture cannot be broken.”(John 10:35) But what can be, and has been severely attacked and damaged, is the perception and understanding of that truth in the minds of individuals and societies as a whole. As such, we need to be aware and prepared in our gospel outreach. While we affirm the sovereign work of the Holy Spirit and the sufficiency of Scripture in the salvation of a person, like Paul at Mars Hill, we need to understand the times and culture in which we live, and use all the available building blocks of God’s truth to respond. In our increasingly secular and scientific age, not only Biblical inspiration, but God’s existence, and the very nature of truth itself has been challenged to the core. To further marginalize and suppress it, a very vocal and influential minority is encouraging that spiritual truth be publicly ridiculed and reviled by all who reject it, to expose its absurdities. Intellectual and moral barriers have been raised against the gospel. In such times, while we need to faithfully preach and present Christ, there may be an increasing need to reconstruct some of the foundational, philosophical and historical truths upon which revealed truth must firmly stand in people’s minds as well. Besides being a prerequisite for, or even better, an integral part of our gospel outreach in this age, an awareness and understanding of these essential truths will also serve as invaluable support and innoculation for young believers, who will be confronted directly with these attacks.

The aim, then, in this series, is to offer some suggestions that will assist, at a very basic level, the “rebuilding” efforts of those who find this a real issue in their own thinking and among those with whom they interact and try to reach. Using the metaphor of constructing a building, we would like to build an argument “from ground zero to glory” for truth. Starting with the foundation, we will attempt to establish the self-evident basis of truth that God has established, then moving up each floor, to affirm the historicity of the Bible and the cardinal truths it reveals, and upon which we have built our lives and staked our eternity.

Some arduous work of clearing away the rubble may be necessary, as the argument is being built. It will involve philosophical, historical, and Scriptural tools and material, to design, dig, and construct, but it can reward us grandly with renewed appreciation and confidence in God, His Word, and the ultimate glory He has prepared for us. No doubt, for some, the endeavor will be hopelessly simplistic and inadequate, and for others, too complex and unnecessary. Hopefully, somewhere in the middle, there will be truth that will serve to reaffirm and equip each of us who has or will face these issues. Thankfully, along with the Bible itself, we have many insightful resources from scholarly minds to combat the attacks, and from which we can draw strength to meet the challenge to rebuild truth in the thinking of our present day and generation. 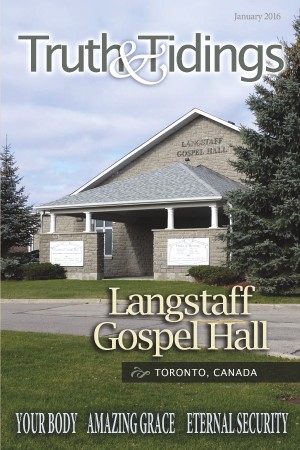