The Lord Jesus was the greatest teacher to walk on planet earth, as demonstrated by both the enduring quality of His words and the transforming power of His message. He is uniquely qualified to be the model teacher, as He is the creator of language itself, as well as the creator of man’s intellect and capacity to gain knowledge and understanding through language. He knew His subject and His audience exhaustively. He always knew the proper word for the occasion and the most effective way to communicate for the intended impact. There is a wealth of instruction for us in observing His teaching methods.

Isaiah says prophetically of Christ, “The Lord God hath given me the tongue of the learned, that I should know how to speak a word in season to him that is weary: he wakeneth morning by morning, he wakeneth mine ear to hear as the learned.” (Isa 50:4)  Before He spoke to men, He communed with His Father, “But he would withdraw to desolate places and pray.” (Luke 5:16 ESV)  The Lord rose early to spend time alone with His Father before embarking on the day’s work of teaching and preaching.

Living What He Taught

In teaching His disciples to serve one another, He first demonstrated service by washing the disciples’ feet. He said, “For I have given you an example, that you also should do just as I have done to you.” (John 13:15 ESV).  Whether it was obedience, self-denial, or suffering for the sake of the gospel, He first lived these out, and then he taught His followers to do the same. A person’s teaching will carry little weight if there are glaring inconsistencies between manner of life and teaching.

The Lord Jesus employed a variety of methods that any teacher would do well to emulate.

“And beginning at Moses and all the prophets, He expounded unto them in all the Scriptures the things concerning Himself.” (Luke 24:27). The two that day on the road to Emmaus were afterward able to relate the truths they learned back to specific Scriptures on which the Lord had shed new light. These believers not only learned truth about Christ, but their knowledge was anchored in a multitude of Scriptures that taught prophetically of Christ. If an audience cannot see from Scripture the basis for the teaching, then, even though it may be true, it will not have the same ability to edify and fortify the listeners.

He used stories and examples from everyday life that all of them could relate to in order to explain abstract truths. Sometimes He used an Old Testament story, “as Moses lifted up the serpent … even so must the Son of Man be lifted up” (John 3:14).  Other stories were from everyday work life, family life, or religious life. He drew upon illustrations close at hand – a poor widow putting her offering into the treasury, a passing comment by a disciple on the grandeur of the temple buildings. He drew from current events such as the collapse of the tower of Siloam. His stories were not used merely to entertain or to keep people’s attention, but rather to drive home truth in a memorable way. A story can reach the conscience and get around barriers in a way that an abstract statement may not. In the parable of the husbandmen, the Pharisees unconsciously condemned themselves when they gave the verdict of what was to be done with the men who had beaten the servants and killed the Son (Matt 21:41). The Lord skillfully brought the parable to a conclusion, so the Pharisees perceived that they were the wicked husbandmen in the story.

The Lord often used parables to teach. Parables make a comparison between every day life experiences and spiritual truth. Parables serve as a window into spiritual reality. The Lord’s parables had a two-fold purpose. To true seekers, the parable would illuminate truth.  After hearing a parable the listener would ponder the meaning behind the story, and by the Spirit, gain understanding. To cynical listeners, the parable was just a story. The spiritual truth was hidden from their understanding (Mark 4:10-12,24-26). Some parables are straightforward and the point unmistakable, as in the parable of the husbandmen (Matt 21:33-46). The will of the listener determines whether he or she will grasp spiritual truth.

Truth for Later Use

The Lord taught truth for later use. Much of what He taught was only partially grasped at the time by the disciples. “What I am doing you do not understand now, but afterward you will understand.”  (John 13:7)  He taught them what they would need in the future. It was beyond their present experience, but as events would unfold – His death, resurrection, ascension, and Pentecost – the truths He had taught would start to make more sense as the Spirit would bring them to their remembrance. When teaching, we should always be cognizant of the level of the audience’s understanding and their present experiences. We should not shy away from teaching the whole “counsel of God” (Acts 20:27) and stretching their minds. What we hear today may not seem relevant to our circumstances, but it may be just the truth we need to recall to mind to sustain our faith in three months time.

The Lord repeated his instructions, as the disciples were slow to grasp his teaching. This was not due to any deficiency in His teaching; rather their hearts were hardened and their minds forgetful. Peter learned this from the Lord and practiced the same (2Peter 1:12-13). Truth needs to be taught and retaught. This does not mean repeating a message word for word to the same audience without variation. Just as the Scriptures teach a given truth repeatedly in a variety of interesting ways, truth can always be retaught in a fresh way. The truth of God is living, and mature believers are never bored by hearing truth properly taught, no matter how familiar it is.

The Lord’s teaching methods serve as a model, whether we are teaching publicly in an assembly, a Sunday school class, or privately at the dinner table. The principles are timeless and effective in every generation. 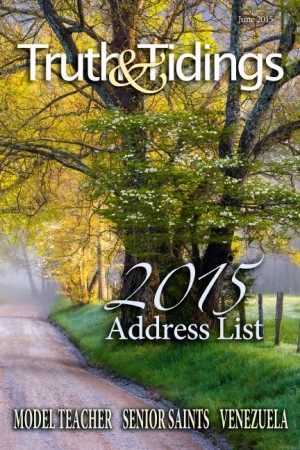