Last month we saw that our Lord Jesus Christ, when He was here on earth, lived a life totally without sin. We noted, in closing, that not only did He not sin, but it was, and is, absolutely impossible that He could sin. This is referred to as His “impeccability.” Consider now the testimony of Scripture to that reality.

In several New Testament Scriptures, the Lord Jesus is compared to, and contrasted with, the first man, Adam. In 1 Corinthians 15, He is referred to as “the second man” and “the last Adam,” in contrast to “the first man Adam” (vv45, 47).

One thing that Adam and the Lord Jesus have in common is that both of them were sinless when they made their appearance in this world, a fact true of no other men who have ever lived. However, as far as sinlessness is concerned, there was a massive difference between them: Adam was innocent, but the Lord Jesus was holy.

Adam was created in a state of “innocence.” Before the serpent entered the garden, he had no knowledge or experience of sin. Yet he was capable of sinning, and, as we well know, he did sin (Gen 3). There are strong indications in Scripture that not a long period of time elapsed between his creation and his falling prey to the temptation to sin.

In contrast, the Lord Jesus was (and ever is) “holy.” This is how the angel Gabriel described Him to Mary (Luke 1:35). Adam was never described in this way, even before the fall.

“Holy” denotes that which the Lord Jesus is intrinsically. It means much more than “innocent.” It is not just that He was without sin, but that He had no potential to sin, nor could He feel any desire to sin. There are times when we (sinners) are disposed to sin, even if we do not actually do it. Not so the Lord Jesus Christ. He could not even have any inclination towards sin. All this is involved in the word “holy.”

Against this, some would argue that saved sinners are also described as “holy,” both positionally (for example, “Wherefore, holy brethren, partakers of the heavenly calling,” Heb 3:1) and practically (for example, “Be ye holy for I am holy,” 1Peter 1:16). Thus, they would say, you cannot argue for the impeccability of the Lord Jesus using this word when it is also used of people who clearly are sinners.

Is there an answer to this protestation? Yes. As far as believers being “holy,” we are that positionally, being set apart unto God; it is ours because of what Christ has done for us; it is not innate to us. We were not “holy,” in that sense, when we came into the world (and, as we have seen, nor even was Adam). Our holy standing has been imparted to us. In contrast, the Lord Jesus is, and always was, inherently holy.

Insofar as any believer can be described as “holy” practically, this is, at best, true only in a relative sense. We ought to be holy – in contrast to unbelievers – and to become more holy. But even the most “holy” believer is not free from sin or the ability to sin. Only the Lord Jesus is “holy” in the absolute sense.

Looking at things from another standpoint, His impeccability is a necessary consequence of His deity. We have seen (in earlier articles) that He is God, and that His deity was not diminished by His coming into the world. It is impossible for God to sin, as many Scriptures affirm. Consider just one: “God cannot be tempted with evil, neither tempteth He any man” (James 1:13). This is an absolute, unqualified statement. It is as true of the Son as it is of the Father, and was just as true when He was on earth as it was before He came, or now that He has returned to Heaven. The idea that Christ could retain His deity and yet at the same time be capable of sinning is untenable.

Someone may object along these lines: you are arguing for the impeccability of the Lord Jesus based on the fact that God cannot be tempted with evil. We also read that God does not grow weary (for example, Isa 40:28) or sleep (for example, Psa 121:4), yet the Lord Jesus did become weary, and He did sleep. So, they may say, you cannot claim that the Lord is impeccable based on what God is like.

However, this objection is based on a failure to distinguish between moral attributes and those that are merely physical. As we have seen in earlier articles, when the Lord Jesus came into the world He fully retained all the moral characteristics of God, while subjecting Himself to conditions that constitute an integral part of human experience, such as tiredness and sleep. So it is valid to take statements that are true of God morally as being true of Him, while certain others, relating to physical things (such as “Whom no man hath seen, nor can see,” 1Tim 6:16), are not.

We have considered the impeccability of the Lord Jesus Christ by contrasting Him with Adam, and as a consequence of His deity. Both of these come together in Isaiah 6, where Isaiah sees the Lord “high and lifted up.” The whole tone of this passage is one of utter holiness; the seraphim covered their faces and feet and cried, in awe, “Holy, holy, holy, is the LORD of hosts” (vv2, 3). John 12:41 tells us that it was the Lord Jesus Whom Isaiah saw at that time. Thus, here we have testimony, both to His absolute holiness and to His deity. From both viewpoints, His impeccability is impressed upon us.

Next month, Lord willing, we will consider testimony to His impeccability from His own words and from the epistles. 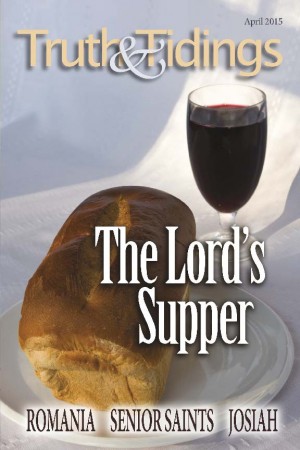