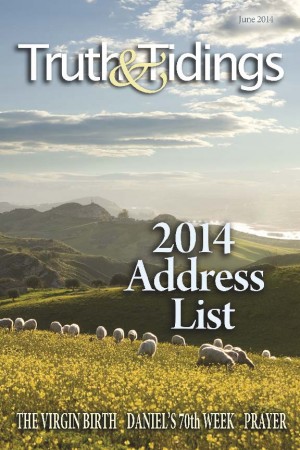 One week of this prophecy awaits fulfilment. Consistent exegesis demands that this is a period of seven years of 360 days each, making a total of 2520 days. If the first coming of Christ (the Messiah) was accurate to the day there is a very strong case for absolute accuracy in the date of the Second Coming of Christ to earth. The starting point of this period is the “confirming” of a covenant between one identified as “he” and the leader in Israel who speaks for the “many.” The only possible antecedent for the “he,” both grammatically (the nearest antecedent) and logically, is the one described as “The Coming Prince” in the previous verse. The use of the word “Prince” suggests one who stands in contrast to Messiah the Prince and it has been shown that he is the powerful leader from the west. Other Scriptures (Dan 2:40-43; 7:7-8) indicate that he will lead a ten-power world kingdom on the pattern of, but far greater than, the Roman Empire. He is depicted as the Beast from the Sea (Rev 13:1-2) and called the “Man of Sin” (2Thes 2:3).

The emergence of a leader in Israel able to enter into such covenant assumes that Israel is back in its own land and as a nation is able to decide its own destiny. For a period of 2554 years from 606 BC to 1948, this was never so. It must therefore be of prophetic significance that only since Israel became an independent nation on 14th May 1948 could such a covenant be made. They await a charismatic leader able to command a majority vote for peace. When such arises he will be the one of whom the Lord warned that he would “come in his own name” (John 5:43) to claim the allegiance of the apostate nation of Israel. He would answer to John’s vision when he wrote “I beheld another beast coming up out of the earth” (Rev 13:11) and identified in other Scriptures as “The False Prophet” (Rev 16:13; 19:20; 20:10) and “The Antichrist” (1John 2:18).

This seven-year covenant underwritten by the powerful western leader:

(a) brings peace in Israel

(b) permits the rebuilding of the temple in Jerusalem (2Thes 2:3-4) and

(c) allows the reestablishment of the sacrificial system of Judaism.

Isaiah has described this covenant in scathing terms as “a covenant with death” and “an agreement with hell” (Isa 28:18).The confirmation of this covenant commences the seven-year tribulation whose details will be unfolded in the book of the Revelation (Rev 6-16). In the middle of this period, at three-and-a-half years, a crisis develops. Suddenly, the recently established sacrificial system is interrupted. The sacrifice (the blood offerings) and the oblation (the non-blood offerings) of Judaism are made to cease. The action that brings this about is described thus “upon the wing of desolations shall come one that maketh desolate” (RV). The most justifiable interpretation is to see the “wing” as the wing or pinnacle of the temple from which Satan sought to persuade Christ to make a public claim to deity (Matt 4:5). It is here that the leader in Israel (the false prophet) will place the image he has made of the Beast (Rev 13:14) and demand his worship. This is identified by the Lord as “the abomination of desolation” (Matt 24:15). This happening at the midpoint of the week introduces the “great tribulation” (Matt 24:21) spoken of by Jeremiah as “the time of Jacob’s trouble” (Jer 30:7) when unparalleled judgment breaks on earth. This is the period when Jerusalem is trodden under foot for 42 months (Rev 11:2) and every soul who will not worship the Beast is put to death. Jews and believers who will not bow to the Beast are put to death.

This idolatry, the worship of Satan’s man, is allowed to continue to the “consummation,” a word meaning “full end,” that indicates the judgment of this man will take place on the last day of this 70th week as Christ arrives on earth with the armies of heaven (Rev 19:11). In Daniel 9:27, the word “determined” is the same word as already used in verse 26 and means “decreed” – heaven has passed its judicial sentence upon unbelieving mankind both in Israel and the nations. Unbelievers who worship the Beast, bow to his image, and take his mark will share his doom. That judgment is defined in the final statement of the text: “shall wrath be poured upon the desolator” (RV). This points to the confrontation at Armageddon between Christ and the Man of Sin who has led the world into terrible desolation. The record of Scripture is concise: “And the beast was taken and with him the false prophet … these both were cast alive into a lake of fire burning with brimstone” (Rev 19:20). With the desolater cast into the Lake of Fire and his armies destroyed (Rev 19:20-21), Christ moves to Jerusalem (Psa 24:7-10) to claim the crown refused Him when He came the first time. The promises to Abraham and David will be fulfilled in the kingdom established at this point. The record of Zechariah thrills the soul: “He shall speak unto the nations, and His dominion shall be from sea even to sea, and from the river to the ends of the earth” (Zech 9:10).