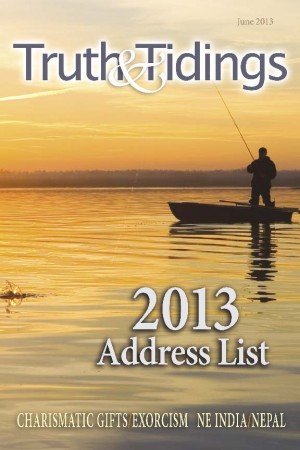 Edmonton: Please pray for gospel meetings purposed from May 19 – June 2, D.V., with Bryan Joyce and Bill Seale. Meetings will be held in an auditorium at King’s University College.

Richmond: The assembly held two weeks of gospel meetings in April following the Easter conference when Marvin Derksen and Bryan Joyce faithfully preached each night and there was good interest. Each Friday night, a bilingual meeting was held in English and Mandarin. Blessing was seen in salvation.

Saint John: The assembly commenced gospel meetings and has been encouraged to have people out each night.

Gander: The Easter conference was held March 29–31 with Eric Fowler, Bryan Funston, Gaius Goff, Jim Jarvis, Carl Payne, and David Swan present. It was an enjoyable weekend, although the numbers were down compared to last year due to half of the total snowfall for the month of March falling over the weekend. On Tuesday following the conference, Gaius Goff gave ministry and an update on his recent trip to Nepal. A six-week series of Monday night children’s meetings commenced on April 8, using “Lost and Found” stories in the Bible. The response has been encouraging, with 28 young people out on the second night, many returning from previous series.

Gander Bay: A short visit from Bryan Funston was enjoyed from April 12-14. Bryan spent a number of years here during the early years of the gospel work in central Newfoundland, and his return visits are very encouraging. The annual conference is being planned for the Victoria Day weekend, May 17-19.

Sandringham: Bryan Funston visited the assembly April 3-4, and also visited some interesting contacts before moving on to Fogo Island from April 5-11 for an appreciated visit.

Earlton: The assembly used an agricultural theme in its display at the Earlton Farm Show in April. Many texts and tracts were handed out, with the promotion of a special weekly night where attendance doubled the following week with some parents attending. Up to 40 children have been coming regularly since then.

London: The saints here enjoyed three weeks of faithful gospel preaching with Frank Sona and Jim Bergsma. The Lord was pleased to save, for which we are thankful.

Mississauga: The Applewood Heights assembly was able to help Lorne Langfeld at the Mississauga Home Show in April. The response was encouraging as many were interested in conversation and accepted Bible texts, pens, and magnets. Please pray for the planned Applewood Bible Camp (ABC), July 8–12 (9am–12:30pm). Steph Parent will be speaking to the children.

Timmins: The assembly appreciated three ministry meetings with Fred Krauss on “Prayer.” This was after the Kapuskasing Easter conference.

Toronto: The eight convening assemblies of the Toronto Easter Conference are thankful to the Lord for His felt presence in the practical and timely ministry given by our preaching brethren. Lives set apart and sanctified for the Master’s service in view of the Judgment Seat of Christ was a key theme impressed upon the saints of all ages. It was encouraging to see record attendance, including a large number of young people sitting under the ministry, and also to hear of some being led to salvation.

Lord willing, the Rexdale assembly will be having one week of DVBS for children and young people of all ages, Monday to Friday, July 8-12 from 10 to 11:45am at the Rexdale Gospel Hall. Speaker: Stephen Vance.

Crapaud: The children’s work is continuing in the Community Hall with a good number of children from the community attending weekly. The work on the new Gospel Hall is continuing and the assembly is thankful for God’s faithfulness.

Alpena: The assembly was very appreciative of follow-up visits by Isaiah (Ike) Frazier and Melvin Mendez. Both brethren took time to give help with the meetings at Alpena and Springdale, and continued assisting with the renovations at the new hall in Springdale.

Phoenix: About 150 people attended the West Phoenix Hispanic Conference.  Marcus Cain, Dan Harvey, Shad Kember, and Abisai Vieyra helped in the ministry and gospel meetings. There was much joy as a man professed faith in Christ and a sister obeyed the Lord in baptism.

Stout: The conference was encouraging with larger numbers attending and wholesome ministry shared by 13 of the Lord’s servants. The five weeks of gospel meetings with Albert Hull and David Hunt that preceded the conference were well attended with God blessing in saving souls and others showing concern. William Skates visited the assembly in February for a week of appreciated ministry.

Byfield: Robert Surgenor had four nights of ministry and Gene Higgins preached the gospel here in this small assembly recently.

Saugus: The assembly was blessed with ministry from Gene Higgins after his return from New Zealand. He gave a brief report on the assemblies in the part of the country he visited, and spoke on “The Mighty Compulsion of a Magnificent Love” in 2 Corinthians 5:13-15. The annual children’s treat was held on Saturday, April 27 with a good number of unconverted present. David Zuidema (Midland Park) faithfully presented the gospel from 1 Corinthians 15:3-4. Pray that this message may reach the hearts of those in attendance.

Livonia: Brian Kember and David Petterson preached the gospel at the Stark Road Gospel Hall for three weeks in April. Two souls professed faith in Christ during the meetings, and the believers were very encouraged.

Fridley: One week of stirring and helpful ministry on the subject of “Shepherds and Shepherding” was given by Bruce Rodgers in April.

Hickory: Robert Surgenor was with the assembly in April for two weeks of ministry on the subject of the Holy Spirit. The believers were challenged and encouraged by the practical and devotional ministry. Brother Surgenor also preached a clear and powerful gospel each Lord’s Day. Several children of the believers expressed concern about their soul. Please pray for their salvation.

Crandon:The assembly was blessed by the ministry of Walter Gustafson April 22-26 on various subjects that were practical and helpful to the believers. On Saturday, April 6, the assembly had a Bible and literature booth at a local 5K run where they had been asked to come by a contact made from the flea market booth of 2012. Continued prayer is valued for all connected to the assembly.

New Creek: Robert Surgenor plans to pitch his tent here again as he has done over 50 times in various places. Please pray for these meetings.

Cancun: After a drive of 5,000 miles from Vancouver, David Smith has now arrived here. His Bible display, including a model of Noah’s Ark, a three dimensional map of Israel, and literature, has been set up in 20 cities and villages, with hundreds of people across Mexico being exposed to the Word of God. While in this large resort city, he and Heriberto Gomez (Zamora) are helping with the meetings. About 30 people attend on the weekends. Your continued prayers for this work is appreciated.

El Borrego: Paul Thiessen, Felix Ayala (Zapopan), and other brethren continue to make weekly visits to this roadside community between Guadalajara and Tepic. There has been a real transformation in the life of a man called Martin Olguin since he trusted Christ two months ago.

Guasave: Shad Kember and Abisai Vieyra, recently commended to full-time service, had a week of evening gospel meetings in a school in Guasave, where God blessed in the salvation of two women. Others are showing deep interest in salvation. In the afternoon they held meetings in a small farming community outside the city called Abelardo Rodriguez, with good attendance and interest.

Nogales: Marcus Cain made two visits to Nogales on the US border, and had house meetings, once with Abisai Vieyra and once with Jairo Gracia (Hermosillo). Please pray particularly for a young man whose name is Dar who expressed sincere concern about not being saved.

Obregon: Emily McCandless spent a month helping in the work, visiting several women, saved and unsaved, who attend the meetings.

Glengormley: The assembly has been enabled to place a portable hall on council ground in New Mossley estate close to the Gospel Hall. Paul MacAuley and Paul McClarity commenced on April 7 and are seeing a number of local people attending.

Crossgar, Co. Down: The assembly has put up a portable hall on a vacant site on the outskirts of the town. Stephen Gilfillan and Chris Beresford have been preaching nightly since commencing on April 7.

Craigavad: Wesley Martin and John Fleck have their portable hall in Crawfordsburn Country Park in association with the assembly here, and were encouraged when an elderly man in his late eighties professed salvation early in these meetings.

Rathfriland: David Gilliland and John Rogers are having gospel meetings in the town in a store made available to them by a brother in the Gransha assembly.

Sandringham: Elton Fairfield had two weeks of gospel meetings in the Gospel Hall. It is encouraging and cause for thanksgiving to God that blessing has been seen as a result of a gospel series held prior to Easter in Buckna, Ballynure, Dromore (Lough Road), and Tullyrowan. Gordon Williams give appreciated ministry in various assemblies after the Belfast Easter conference. He visited Banbridge, Plantation, Buckna, and Whitehouse.

Doug and Debbie Yade and Louis Smith were with the assembly in Volchansk and with the Christians farther north in Severouralsk. A responsible brother in Volchansk recently passed away, so the visit was timely and appreciated by the widow and the Christians. Ministry was given to a full room and gospel contacts were followed. Some attended who had not come for three or more years. A small Sunday school is to resume shortly.

In Severouralsk, most of the believers have swallowed false doctrine, a subtle version of salvation by works.

A visit to these believers was not welcomed, and prayer is that they will see the error and return. There is need for ministry and for a gospel effort.

Marguerite Thompson of Oakland, ME began her journey February 16, 1916, started for heaven October 9, 1964, and arrived safely February 7, 2013, just shy of her 97th birthday. She was a friend to many; a wonderful and remarkable woman. She was saved on the bus on the way home from a Billy Graham crusade through the hymn, “Just as I am.” She loved the assembly and had such a burden for those of her family still without Christ. Albert Hull took the funeral.

Betty (Elizabeth) Grainger of Markham, ON, on March 23, after a brief illness. Saved at age 16 while listening to a message from Isaiah 53:5, Betty continued in happy fellowship for her entire life in several Toronto area assemblies, latterly at the Unionville assembly. Betty was predeceased by her husband Laurie, and leaves three daughters, a son, and a brother to mourn her loss, along with a number of grandchildren. Betty was a quiet, consistent believer with a radiant smile, and will be truly missed. The service was shared by John Adams, Tom Browning, and George Telfer. A large number heard the gospel from her conversion text.

Mrs. Evelyn Magee (nee Wright) of N. Ireland, on April 4, in her 84th year. Our beloved sister was saved as a girl of 13 in the home of the late John Marcus of Ballyvaddy, Glenarm, and lived to prove the reality of her salvation. She and her husband James were commended to the Craigyhill assembly from the assembly in Larne in July 1972. She bore a godly testimony for almost 41 years; her quiet and consistent life was an example to all. Since the passing of her husband in 2009, the care her large family of 11 gave her was exemplary. A very large company attended our sister’s funeral service on April 7, from Craigyhill Gospel Hall to Glenarm Cemetery. Her son-in-law Wesley Moore and Willie Fenton shared the funeral service, with local brethren participating.