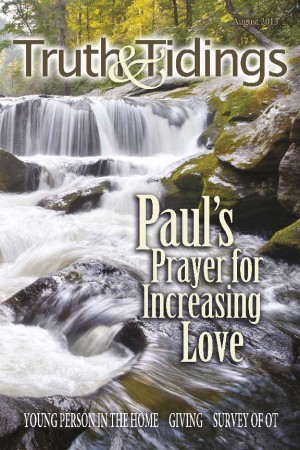 Revelation 4 and 5 record some of the most remarkable scenes in Scripture. Their scale and significance are alike vast, and they defy any attempt to deal with them at all comprehensively in a short article like this. Nonetheless, there are a number of important points that we must notice.

Consider first the prelude to the scene. Revelation 1-3 has been occupied with “the things which are” (Rev 1:19). In particular, they have been concerned with assembly testimony. Many commentators have seen in the seven churches an outline of the history of the Church age. Whether or not we subscribe to this view, we can readily agree that the conditions and challenges of assembly testimony are addressed in each of the seven letters. At the conclusion of this section, John is called up to heaven. This heavenly summons provides us with a lovely picture of the rapture, which will bring to an end the earthly testimony of the Church and will usher in the events that begin to unfold in Revelation 4 and 5.

Having been transported to heaven, John found himself viewing a remarkable prospect. The scene, with its splendor, color, and radiance, exceeds our imagination. The glowing lamps, the rainbow and the sea of glass, the motions of beasts and elders, and the glory of angelic myriads, of white robes, of glittering diadems and of golden vials, and the flashings of the lightning would be more than sufficient to dazzle the eye and to daze the senses. But all this radiance is just a frame, reflecting and refracting the all-surpassing glory of the One Who sits on Heaven’s throne.

Around this throne are grouped the participants in these scenes of glory. The symbolism of these participants has not always been the subject of unanimous agreement. The four beasts, or living creatures, seem to be representative of created life in all its aspects. They give “glory and honor and thanks to Him that sat on the throne” (Rev 4:9), and their praise prompts the 24 elders to acknowledge “Thou hast created all things, and for Thy pleasure they are and were created” (Rev 4:11).

In the case of the 24 elders, a number of elements allow us to conclude that they symbolize the Church. Firstly, their name is significant. They are described as elders, or seniors, a term whose meaning would be difficult to comprehend if they were angelic beings, and thus deathless and ageless. Their attire, too, is important. Both the white garments and the diadems that they wear are symbolic of rewarded service, and elsewhere in Scripture are linked with believers of the present dispensation. Thirdly, their priestly character is emphasized by their number, echoing the courses of the Levitical priesthood, and by their actions, as they pour out the golden vials, filled with the prayers of the saints. Finally, notice their song. In chapter 5, they sing of their redemption to God from every kindred and tongue and people and nation, and of the blessings into which they have been brought.

As the action of the scene unfolds, our attention is drawn to the parchment, the scroll with the seven seals that is held in the right hand of the One upon the Throne. From its description, and from its presentation in this passage, this scroll has been described as the “title deeds of earth.” The events that follow the opening of its seals, and the implied unrolling of the scroll, make it clear that it encompasses and documents God’s prophetic plan for earth.

John appreciates the importance of this scroll. This is clear from his response to the problem that emerges. A strong angel sends out a challenge – “Who is worthy to open the book, and to open the seals thereof?” His question launches a cosmic search through all of creation for one who would be worthy to claim the title deeds and unfold God’s prophetic plan. That the search is fruitless reflects the total depravity of humanity. As the human race, in its entirety, is searched, not a single individual is found worthy to take the scroll and to open its seals. As God’s purposes for Creation seem to have been thwarted by man’s failure, John weeps. His grief was deep – this is the word used of Rachel’s weeping for her children (Matt 2:18), of Peter’s tears of repentance (Matt 26:75), and of the Savior’s lament over Jerusalem (Luke 19:41). But his grief is assuaged by the words of the elder, and by the realization that, in spite of human failure, there is one glorious Person Who has the right to take the scroll from the right hand of the Throne-sitter.

At this crucial moment of the action, John’s attention is turned to the “Lion of the tribe of Judah, the Root of David” (5:5). John looks for this formidable being, and beholds, in the midst of the throne, a freshly slain, yet living Lamb. It is the risen Lord Jesus Christ Who is at the center of this majestic scene. His unique authority is demonstrated as He takes the scroll from the right hand of God.

John’s tears are turned to triumph as the Lamb receives the scroll. In the chapters that follow he will witness as the seals are broken, and the scroll is unrolled, unfolding God’s great prophetic program. Three series of judgments are described – the seven seals, the seven trumpets, and the seven vials. These divine judgments are poured out upon a rebellious earth, with awful and escalating severity. As they proceed, John is granted a heavenly view of the events of the Tribulation. These will unfold on earth, where all will be confusion and turmoil. From the privileged perspective of heaven’s throne room, however, the inexorable order of God’s program will be evident.

In light of this, we can scarcely wonder at the praise that marks these scenes. We cannot but join the swelling song of worship that resounds through heaven. In chapter 4, the beasts and elders proclaimed before the throne the praises of the Creator (v11). Now, the four and twenty elders break forth into a new song, declaring “Thou art worthy … for Thou wast slain, and hast redeemed us to God” (v9). They do not sing alone, for their praise spreads farther and farther, until the whole cosmos is united in the re-echoing exaltation of the Lamb Who is worthy. Revelation 5 ends with a mighty tumult of praise to God and to Christ. We cannot read the words without taking up the strain, as worship awakens in our hearts. How wonderful it will be, in that coming day not just to echo the song, but to be the leaders of heaven’s praise and worship of the Lion of the tribe of Judah, the slain and living Lamb, Who is exclusively and uniquely worthy of blessing, and honor, and glory, and power.