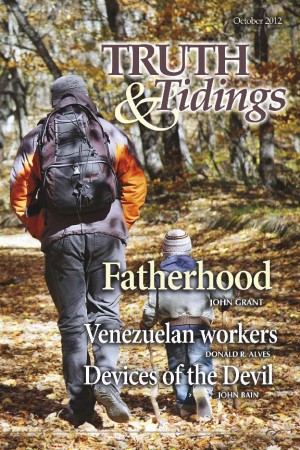 John writes, “It was the preparation of the Passover and about the sixth hour.” Mark records, “it was the third hour, and they crucified him.”

A number of solutions have been suggested to explain the difference:

1. John is writing of the Jewish day of preparation which began at the previous sunset. He is referring to the sixth hour of the night or midnight when the Lord stood in judgment before the priests. This hardly seems plausible in light of the context.

2. Many scholars believe the explanation lies with the Greek texts. In many ancient languages letters had numerical values, so a writer, instead of writing the words “third” or “sixth,” would use the third or sixth letter of the alphabet. As manuscripts are copied an interchange of two similar letters is possible. There are also some manuscripts of John 19 which have tritos (third) instead of hekton (sixth). While there is some merit in this explanation, the majority of manuscripts show the reading as the sixth hour.

4.   In John 11:9 the Lord Jesus asked, “Are there not twelve hours in the day?” He is referring to the period of daylight in contrast to that of darkness. In Matthew 20 we have some laborers hired early in the morning, others at the third hour, some at the sixth, the ninth, and at the eleventh hour. In context these can only refer to hours of daylight. In John 1:39 we read of the tenth hour and the context suggests the close of the day or about 4pm. In John 4:52, “yesterday at the seventh hour” would be 1pm, so the sixth hour of John 4 would be noon. However when we come to John 19 it cannot be noon. Since John is writing much later than the synoptic writers he may in this chapter be using Roman time, the day starting at midnight and the sixth hour being 6am. The apostle John was a witness that day and the Holy Spirit would bring to his remembrance what had happened. Whether Jewish or Roman time we have accurate records of the events.

Matthew, the gospel of the King puts the kingdoms last, but Luke, the Gospel of the perfect man shows the sinless servant Who would “not tempt the Lord thy God.” Matthew gives the dispensational order and Luke gives the moral order.

Three principles should be considered in dealing with apparent discrepancies.

First – Are the events the same? To confuse similar events is to introduce difficulties. However, there could be only one rending of the veil on the day of the crucifixion.

Second – Does the context imply a strict sequence of events? In Matthew 27:50, 51, we read “Jesus when He had cried again with a loud voice, yielded up the ghost and behold the veil of the temple was rent in twain.” The words “and behold” are also translated “and lo,” “and suddenly,” “and instantly,” so it seems certain that the rending of the veil follows the loud cry of the Lord Jesus. However, Luke does not use these words of sequence.

Third – Where sequence is not explicitly seen, has the writer changed the order for a thematic purpose? Many of the verses in this section of Luke 23 are connected events joined by the little word “and.” This does not necessarily imply chronological order. Verse 47: “Now when the centurion saw,” obviously points to a moment of time.  Matthew gives us the sequence and links the rending of the veil with the loud cry, while Luke connects the rending of the veil with the darkness.

The loud cry indicates the finished work of the cross; the rent veil, while obviously connected with the finished work, has other implications. The veil of the tabernacle and temple were a dividing line between the inside and the outside, between the place of God and the place of man. Sin put man “outside” the garden; sin brought spiritual death and spiritual darkness. At Calvary the light of the sun failed and the world was literally in darkness. Christ the Light of the world went into the darkness of death, but in doing so caused the veil to be rent. In typical teaching, inside that veil would be the light of the glory of God. Provision is made for man to move from the outside to the inside, from the darkness to the light, from the place of death to the presence of God.

The centurion at the cross could not have known of the rent veil but he heard the loud cry.

The priest at the golden altar could not have heard the cry but may have known of the rent veil.

Matthew, the Gospel of the King relates the centurion’s words, “Truly this was the Son of God.”

Luke, the Gospel of the Sinless One relates the centurion’s words, “Truly this was a righteous man.” Both statements are true, both were said, both are recorded, but not by the same writer.