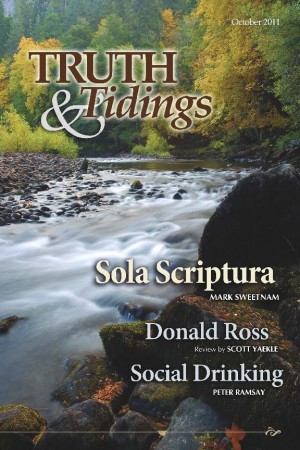 Calgary: The assembly was able to erect a tent in a central area of the city for gospel meetings shared by Steve and Bryon Myers, for ten days. There were children meetings in the mornings and the interest was good.

Fort McMurray: The annual conference held on August 26-28 had more visitors than usual. The gospel and ministry were shared by E. Armson, J. Gould, J. Ronald, P. Smith, and S. Wells. We seek the prayers of God’s people for the gospel testimony in this city.

Fairview: The assembly held a week of children’s meetings in August with Pete Smith who also gave profitable ministry for three nights. The Fairview and Victoria Drive assemblies enjoyed the visit of Murray Pratt and his family during the month of August.

Vancouver: For the 38th year, the Vancouver assemblies supported the Gospel Booth at the Pacific National Exhibition. This 17-day fair has been a fruitful work, and the Lord is able to bless His Word. Many good conversations were held and thousands of pieces of literature were given out. Two water coolers with the offer of free water attracted many to come in to the booth, or at least receive a literature package.

Corner Brook: The assembly held a two week series of gospel meetings in the Town Hall in Massey Drive (a suburb of Corner Brook) with Bert Joyce and his son, Stephen. There wasn’t much response from the community itself, but the meetings were well-attended with the evident working of God in the souls of some.

The assemblies in Rocky Harbour and Parsons Pond held outreach open-air meetings in their communities and other locations with the help of local brethren (Snowden Skeffington, Wilson Payne, and others). The assemblies on the west coast also appreciated the ministry of Gaius Goff.

Fogo: Gordon Williams and George Whey had a week of open-air meetings on Fogo Island, August 21-26. Brethren from the assembly shared each night in the meetings. There were a number of people from the Island who stopped by to listen to the gospel.

Gander Bay: Ken Taylor, with his wife, visited for one night of ministry during their visit to Newfoundland.

McIver’s: The assembly had an encouraging two-week series of gospel meetings under canvas with Jim Jarvis and Eric Fowler. There was evident fruit in the gospel.

Weaver Settlement: In August, the saints were encouraged when a young sister obeyed the Lord in baptism. James McClelland spoke a timely message with a number of unsaved present to hear the Word.

Newbury: Jim Beattie and William Metcalf continued for four weeks with gospel meetings in a tent. The meetings were well-attended, and the Lord granted encouragement with some blessing. On Wednesday night, August 31, a young man who professed in these meetings was baptized before returning to his home in Jamaica. This gave the saints joy.

Alpena: In August, the assembly welcomed Jerry Jennings who is relocating to this region from Wisconsin, and also appreciated a weekend visit by Craig Saword.

Watertown: Due to illness of a number of the elderly saints, the Mount Auburn assembly had to cancel this year’s conference in September.

Sherman: The saints would greatly appreciate the prayers of God’s people for gospel meetings scheduled to start October 9 with Brian Crawford and Stu Thompson preaching.

Fridley: The saints were cheered by visits from Roy Weber and Robert Orr at their all-day meeting, a good report of the work in El Salvador from Alan Clark, and instructional ministry from George Patterson during the month of August.

Flushing: The believers were blessed with the visit on August 19-21 of Larry Perkins who gave help in ministry and gospel. His visit included the monthly outreach meeting where he preached the gospel to ESL students. Please pray on behalf of the unsaved souls that listened to the gospel.

Denver: The assembly enjoyed a very timely and beneficial two-week visit from Frank Sona, who held one week of children’s meetings on “The Life of Joseph,” and one week of ministry using his chart, “From Egypt to Canaan.”

Salem: Please pray for gospel meetings which were planned to commence September 11 with Phil Howard and James McClelland.

Crandon: The believers here begin meeting as an assembly on October 9 in full fellowship with the Denver, NC assembly. It has been a joy to have them as part of the Denver assembly for 2 1/2 years. Please pray for wisdom and guidance as they step out in obedience to God’s Word. Over the last month, Crandon enjoyed a one-week series of children’s meetings with Paul Barnhardt, as well as an encouraging gospel series with Frank Sona and David Petterson.

Chihuahua: Gilberto Torrens and his family devoted several days in August to distribute texts and tracts in thirteen different towns in the state of Chihuahua, Mexico’s largest state.

Cotaxtla: The hall was full for a gospel meeting held during a brief visit by Craig Saword.

El Barril: Jason Wahls had another five weeks of gospel meetings. Eleonor Mosquera visited for two weeks and was a great help to Shelley as they visited several unsaved ladies that attended the meetings.

Mexico City: The assembly in Ciudad Nezahualcoyotl was helped by five sessions of ministry on the first weekend of August. Three believers were received into fellowship the following Sunday.

Puerto Vallarta: The assemblies in Coapinole and Ixtapa appreciated gospel preaching, ministry, and reports from David Alves, Jr. during the second half of August.

Santiago: James Dyck appreciates the hard labor of several who have helped in the new hall. The believers appreciated a brief visit from Marcus Cain.

Tepic: The believers were greatly encouraged by a well-attended week of children’s meetings held by local brethren. Marcus Cain also visited the assembly and preached the gospel in the nearby town of El Borrego.

Jean Lennox of Cleveland, OH, on June 16, age 82. She was saved as a teenager in Scotland and came to the US in the early 1950s with her older sister Margaret. The rest of her family moved from Kilbirnie, Scotland, to Cleveland, OH in 1954. She had a true servant’s heart, and cared for her father and mother in their sicknesses. Later, she cared for her sister, Wilmar, during her failing health. When Wilmar required nursing home care, Jean visited her sister every day for several hours, and they often sang hymns together. Jean used to say that she thought the Lord’s purpose for her was to care for others. She was in the Monticello Gospel Hall fellowship for several years, and was very consistent in her attendance until her sickness the last few weeks. She leaves a sister and brother, along with nieces and nephews. Her brother Gordon, and niece Sandra, shared reflections of Jean’s life at her funeral. Art Pile took the funeral, and Ron Berquist took the graveside service.

Mrs. Gertie Clingen (née Reilly), N. Ireland, on 6 August, aged 73, after a period of illness. She was saved in 1945 at the tender age of seven and received into fellowship in the Donegal Road assembly. She moved to the Newtownbreda assembly in 1959 when her parents relocated. She was most faithful in attending all assembly meetings and her presence will be missed. Given to hospitality and faithfulness to God, she was a true helpmeet to her husband. She leaves a husband, one son, two daughters, and their spouses, all in assembly fellowship, and five grandchildren. Prayer is requested for them and for the wider family circle, some of whom are not saved. Her large funeral was conducted by W. J. Nesbitt and Sam Ferguson, assisted by local brethren.

Donald L Garnham of Livonia, MI, on August 8, age 93. Our dear brother was born on August 15, 1917, and born again on February 22, 1931 as he rode home from a gospel meeting with his father in a horse-drawn sleigh. He served Canada in the Navy during WWII. In the late forties he immigrated to Detroit, and was in the West Chicago assembly. He married Alice Cumming in 1950, and both were active in assembly activities as they served the Lord together. He was Sunday school superintendent when the assembly moved to Livonia, and was an elder there until 1967 when he was transferred to Pittsburgh by his employer, U. S. Steel. He was an elder in the McKeesport assembly until his retirement, when they returned to Livonia. Many in the assembly remember his years of tender care for his wife, Alice, who was confined to a wheelchair for many years. In the last few years he lived in Indiana, PA and ultimately in a home there. His devotion to his wife and to the Lord remains in the hearts and minds of the Lord’s people. His son-in-law, William Seale, faithfully presented the gospel at the funeral which honored the memory of our dear brother. He is survived by two daughters, Mary (Seale) and Lois (Henkel), and three sons, Robert, James, and John.

Susana Kucman of Welland, ON, on August 14, age 88 years, following a brave battle with Alzheimer’s disease and failing health. She came to Canada as a young girl of 14 from Czechoslovakia, married, and raised five children. She was saved after listening to a televangelist through the hymn “Just As I Am” in September 1976, and lived to prove the reality of her salvation. She was consistent in attending all the meetings. After 35 years of witnessing her testimony, her unsaved son in his eulogy attested to her changed life and peace upon conversion. She leaves behind a saved son Joseph (Frances) and four unsaved sons and daughters. The funeral was faithfully and lovingly taken by a grandson-in-law, two sons, and three grandsons. She loved doing puzzles with an open Bible alongside upon which to meditate. The last piece in her life’s puzzle (resurrection) will be put in place at the coming of our Lord Jesus Christ.

Percy Glister of Taylorside, SK, on August 16, age 94. Our dear brother was saved March 16, 1949, and later baptized and received into assembly fellowship where he remained until failing health prevented his attendance. He enjoyed his salvation, Christian fellowship, and was a friend to many. Predeceased by an infant son, he is survived by his wife Lois, three children, their spouses, eight grandchildren, and four great-grandchildren. Herb Wright took the funeral service, and Ron Wright gave comforting words at the graveside. Please remember the family in prayer.

Willow May Fouts of Akron, OH, on August 19, age 100. Our dear sister was born in Cleveland, OH.  With the loss of her mother at the age of eight she was raised by her grandmother. Willow never heard the plain gospel until as a married woman she attended a fruitful gospel series in Akron in 1931 conducted by Benjamin Bradford, a powerful gospel preacher.  She was saved the final night of six weeks of meetings.  She and other family members were baptized and received into the assembly in 1932. She taught Sunday school for several years and remained faithful to God’s Word and His assembly all her life. She is survived by two children, four grandchildren, 11 great-grandchildren, four great-great-grandchildren, most of whom know her Savior. Her funeral was taken by her three grandsons, Tim and Mark Fouts, and Paul Rawlings. William Snyder spoke at the graveside.