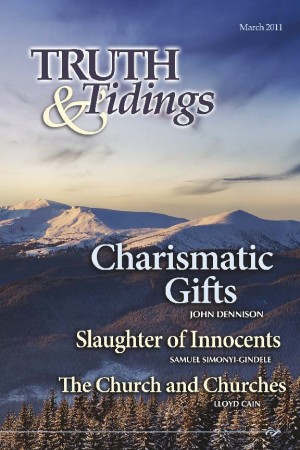 God makes no allowance for Christian victims or believers who whine, “I just can’t help it” or “I don’t know why I do it.”

Peter never made excuses for his sin either. He even wrote to persecuted believers that tough times do not change God’s standard of holiness. He calls them not to live like the ignorant, unsaved people they once were, but rather like the Lord Who said, “Be ye holy, for I am holy” (1Peter 1:14, 15). God does not relax His standard for extenuating circumstances or because we have sinful natures. There is no permitting, pandering, or pitying a sinful life, whether married or single. Holy or sanctified living is a must in every believer’s life.

In 1 Corinthians 7, Paul deals frankly with the subject of human passion which has only one divinely sanctioned outlet. It is for enjoyment and blessing ONLY within a marriage relationship. Therefore, as noble as a single life for God may sound, He wants some believers to marry so they do not burn or become distracted and destroyed by passion. If God, Who knows a believer best, provides a partner in His will, that believer can happily and obediently marry in the Lord.

For others whom He equally loves, God knows they can live successful sanctified lives for Him as single believers. That does not mean single believers are immune to passions and temptations. To the contrary, they will need to be exceptionally vigilant as the enemy will seek to destroy them especially since they have no marriage partner to whom they can direct their passions in a holy and honoring way (Heb 13:4).

God’s standard for sanctified living is a living standard. The Lord Jesus is the perfect example of practical sanctification. While He uniquely did not and could not have sinful impulses, nevertheless, the Bible gives us a secret to His sanctification when it says that He “loved righteousness and hated iniquity” (Heb 1:9).

A Revulsion To What Is Wrong

First, note the negative side. He hated iniquity. It wasn’t just that sin and perversion didn’t attract Him. Far from being neutral and tolerant, He abhorred everything that was unholy, impure, incorrect, and improper. With His conscience aligned with God’s Word, He detected and was repulsed by the slightest breaking of the law. He would never laugh at a dirty joke or enjoy watching a video of someone else’s sin. He would get righteously angry at the hardness of the hearts of the religious leaders (Mark 3:5). His hatred for anything that opposed His heavenly Father would compel Him to make a scourge, flip tables, dump out cash boxes, and drive greedy men from the temple.

Therefore, a major key to keeping yourself sanctified is to have a zero-tolerance policy toward sin. In the subdivision where we lived in Mexico, we had a guard at the entrance. He was trained and armed (with a cell phone), but often sound asleep. Sometimes, believers are trained to know right and wrong, but are asleep at the gate. Daily, active vigilance filtering all influences in our lives is vital to maintain a sanctified life. Anything that smacks of unrighteousness should be shown the door immediately.

Paul, a single man, told the believers in Rome, “Make not provision for the flesh, to fulfill the lusts thereof” (Rom 13:14). “Make not provision” occurs just twice in the Bible and is translated “foresight” (ESV) when it is used the other time in Acts 24:2. It is the idea of giving consideration. Be so vigilant when it comes to wrong and defilement that you won’t even give it consideration in your heart and mind. This will keep unholy attitudes from turning into unholy actions.

A Hunger For What Is Holy

Meet Heavy Harvey. He looks in the mirror, sighs, and then tips the scales at 320 pounds. He vows to lose weight. He skips breakfast. All day he craves chips and pizza, but refuses to go to the candy machine at work. As he drives, his head bobbles as he speeds past McDonalds. His stomach screams to be filled, but he steels his jaw as he envisions a juicy Quarter Pounder.

Meet Growing Gretta. She looks in the mirror, sighs, and then tips the scales at (of course I can’t say, she is a woman). Gretta vows to change. At breakfast she eats yogurt and fruit. Lunch is a spinach-with-almonds salad and water. Supper is a flavorful dish of shoots, roots, and fruits. Snacks all day are cut veggies and green tea.

See the difference? One is focusing only on what he should not eat. The other is focusing on filling herself with good, healthy foods.

The other half of the equation for successful sanctification in the life of the Lord Jesus was that He “loved righteousness.” He filled His heart, mind, and life with what was good, pure, and spiritually healthy. He sought out and enjoyed things that were in line with the Word and will of God.

Before the Lord Jesus came to earth, He could have said, “Then I was by Him, as One brought up with Him: and I was daily His delight” (Prov 8:30). Forever, the Son was with the Father delighting His heart. When He came to earth, nothing changed. “When He cometh into the world, He saith … ‘Lo, I come … to do Thy will, O God’” (Heb 10:5-7). He was in constant contact with His God. He filled His waking hours with communication to God in prayer and communication from God through the Scripture.

Single believers must diligently discipline themselves to fill their minds and schedules with communication and communion with God.

Married people should be best friends. Single people are also social beings as was the Lord Jesus Who guarded His friendships and social interactions with great care. True, He was a friend of publicans and sinners, but never just because He was lonely and needed to talk. Instead, He carefully interacted with them to share the gospel while always maintaining a clear distance from the defilement of their interests and lifestyles.

Also, He actively became friends with others who shared His interests and activities. What a joy, blessing, and help to have a life full of people who share your values and convictions. Paul practiced this as well, as in almost every letter he mentions names of friends and fellow workers.

But please be clear. Whether it was with the disciples, Mary and Martha, or the “women who ministered unto Him,” the Lord Jesus was always careful; no one ever accused Him of anything inappropriate.

Single believers today need to fill their lives with friends, both single and married, and give themselves to reaching the unsaved. Yet, in all friendships and communications there needs to be a conscious and careful effort to maintain holiness. In our modern world where male and female coworkers travel together and with E-mail, MSN, texting, Facebook, etc., both singles and the married need to be very careful to guard the sanctity of marriage and the holiness of communications.

A married person cares for their spouse because that spouse is from the Lord. A single person has all that “care” they can share with others. Paul says they can channel that capacity to care for the things of God.

So, then, could a single person today fill their schedule with companions, concerns, and communion with God such that they could have little time for anything unholy? Could a single believer today have their heart so full of holy concerns that there would be little room for unholy passions? Try it, you just might like living more like God’s perfect Son.