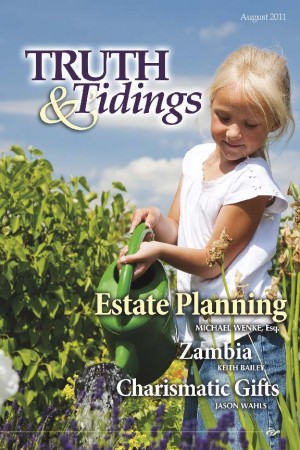 Fruits of the Bible

Go Ye Into All The World: Zambia

The Emergent Church and the Word of God (2)

The Charismatic Movement (5): A General Observation

Priorities For The Lord Jesus: The “Must” of His Service

Gospel: Healed with a Touch

The reception of the Holy Spirit by three distinct companies is found in Acts 2, 10, and 19. Speaking in tongues on these three occasions was a physical manifestation or “sign” that each individual of the particular company had in fact received the Holy Spirit. In Acts 2 (dealt with in a previous article) the apostles who had gathered with Christ in chapter 1 received the Holy Spirit as had been indicated by the Lord’s teaching prior to His ascension. Peter and other Jewish believers marveled “because that on the Gentiles also was poured out the gift of the Holy Ghost” (Acts 10:45). In Acts 19:2, Paul asks a small group of individuals who only knew the baptism of John, “Have ye received the Holy Ghost since ye believed?”

Consequently, it is noted that it was only the “first Jews,” “the first Gentiles,” and “the group that only knew the baptism of John” that spoke in tongues upon receiving the Holy Spirit. This is why in Acts 2:38 Peter promised to the Jews (Acts 2:5) who had gathered when they heard the apostles speaking in tongues, that they too would “receive the gift of the Holy Ghost” if they repented and were baptized. Later, we read that three thousand souls received His Word and were baptized, but we do not read that they spoke in tongues. When the Samaritans received the Holy Spirit it is not recorded that they spoke in tongues either, thus nullifying the idea that one must speak in tongues as evidence of the reception of the Holy Spirit (Acts 8:16-17).

As Peter reached the culmination of his message, he proclaimed the remission of sins for all those who would believe in Him (10:43). Previously, on the day of Pentecost he had concluded his message in a similar fashion, with reference to the remission of sins, but had added, “and ye shall receive the gift of the Holy Ghost” (Acts 2:38). But on this occasion Peter makes no reference to the Holy Spirit. Possibly he did not have opportunity because the entire company believed on Christ and “the Holy Ghost fell on all them which heard the Word” (10:44) or, possibly because Peter was not expecting the Gentiles to receive the Holy Spirit.

To Peter’s astonishment, and that of his Jewish companions and fellow believers, the newly converted Gentiles began to “speak with tongues and magnify God” (Acts 10:46). It is clear that Peter and the other Jewish believers understood what those speaking with tongues were saying as they magnified God. Also, the significance of the Gentiles speaking in tongues was a sign that they had “received the Holy Ghost as well as we” (Acts 10:47).

This instance, when the Gentiles spoke with tongues, would be important in future events as an indication of the authenticity of the conversion of the Gentiles and their equality in the body of Christ. In Acts 11, as Peter would relate the events of chapter 10 to the apostles and brethren in Judea, he would make reference to this great event when the Gentiles had received the Holy Spirit to authenticate their conversion (Acts 11:15-18). The result was that his audience glorified God because He had granted repentance unto life to the Gentiles as well.

Later, when dissension arose over the necessity of the circumcision of the Gentiles in Acts 15, Peter again made reference to the event of chapter 10 as proof of the equality of the Gentiles in the body of Christ, declaring that there is “no difference between us and them” (Acts 15:8, 9).

Acts 19: People who only knew the baptism of John receive the Holy Spirit

In Acts 19 we have the third and final company that is recorded as having spoken in tongues. It is a most interesting and unique group, being identified as “certain disciples” who had only been baptized with the baptism of John. They were, as A. M. S. Gooding remarks, “a group with a pre-cross experience living in post-cross days.”

To probe the depth of their understanding of the Holy Spirit Paul asks, “Did ye receive the Holy Spirit when you had believed?” (JND). The apostle Paul expected that believers received the Holy Spirit upon believing and not via a second experience. It is apparent that they were unaware of the existence of the Holy Spirit (19:2) and that they had not yet believed on Christ (19:4). Thus when Paul expounded the need to “believe on Him which should come after him (John the Baptist), that is, on Christ Jesus” they consequently believed and were baptized in the name of the Lord Jesus. As Paul then laid hands upon them “the Holy Ghost came upon them; and they spake with tongues and prophesied.” It was not the first time that believers had received the Holy Spirit at the laying on of hands (Acts 8:17), but this is the only occasion of the three that speaking with tongues was accompanied by prophesying. This is the final time that speaking with tongues is mentioned in the book of the Acts.

The three recorded instances in Acts of believers speaking in tongues were signs to indicate the reception of the Holy Spirit by three distinct companies of believers.

Those who listened to the believers as they spoke in tongues understood what was being said.

Apart from these three occasions and Acts 8, the reception of the Holy Spirit is by faith upon conversation (Acts 2:38; 19:2).