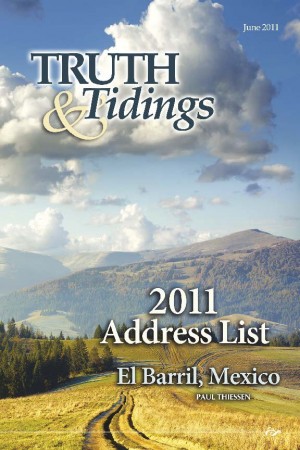 Sanctify Them Through Thy Truth (4): Montanus

When Thy Son Asks: Eternal Suffering

Go Ye Into All the World: El Barril

Gospel: 18 Years of Misery Erased in a Moment

For the last 13 weeks Jason Wahls and his family have gone out every day to the village of El Barril. This village is about 85 kilometers from Zacatecas, where they live. There are never enough hours in a day to visit all of the people on his list.

Shelley is his helpmeet in the work. She loads up the girls and drives to El Barril each afternoon to begin a pickup route over some of the roughest streets in Mexico. Her van is usually full when she arrives at the hall. This week we saw over forty in the meeting every night. It seems that the interest is picking up.

On Thursday, a woman told us, “during the meeting last night I asked the Lord to forgive me. Now, you tell me if I am saved!” After reading a number of verses, I believe the Lord told her she was saved.

We were invited for lunch yesterday to Hilda’s home; she told us her change took place about a month ago. She told Jason earlier that she was saved. She now wants her husband to be saved. In fact, she had invited us for lunch so that we could preach to him!  He has been to three meetings.

After meeting last night, Enedina asked when we were going to teach on baptism, or if it was too early. She attended an apostolic place for years and finally realized that the most important thing had never been taught to them. Her salvation is clear and her desire is evident.

As we got close to El Barril yesterday we were met by 14 Federal police vehicles that were heavily armed. They had confiscated an Escalade and were taking it back to be impounded. We learned later that 400 Federal police had arrived at the local airport for an intense operation in the area. I do believe that the Lord’s protection is felt every day.