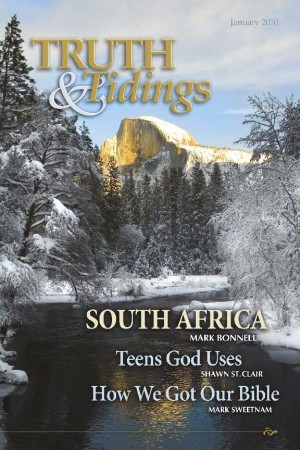 Editorial: From This Day

The Attack on Solitude

How We Got Our Bible (1): Divine Inspiration and the Certainty of Scripture

Teens God Uses (1): One in the Mirror

Go Ye Into All the World: South Africa

Question & Answer Forum: The Use of the Sword

Gospel: How Many are Mine Iniquities?

Peter’s second epistle records the last words written by the Apostle. Conscious that he would shortly be called upon to put off his tabernacle (1:14), he wrote to “stir up” the believers (v 13) and to prepare them for the coming day when the apostolic voice would be silent and when those who had known the Lord on earth would be in Heaven. As Peter seeks to edify his readers, he is careful to remind them that the message that he preached was not a “cunningly devised fable” (v 16) but, in truth, the Word of God. As he outlines the credentials of his message, he looks back to the holy mount (v 18), what he saw (v 16) and what he heard (v 18). Had Peter been a modern evangelical, he likely would have stopped there: offering the subjective and the experiential as the basis for Christian life and testimony. But he wasn’t, and he didn’t. Rather, he makes one of the greatest claims for the importance of Scripture when he turns away from his great experiences and points the believers who would come after him, not to the sensual, but to Scripture – to the “more sure word of prophecy” (v 19).

The basis for Christianity has not changed in the intervening years. Though we are at a greater distance from the days of the apostles and have never had the privilege of knowing them personally, we are not at a disadvantage to believers of the first century. We have, as they did, a more sure word of prophecy, a revelation from God that He has designed to be reliable, dependable, and absolutely sure.

But Peter’s readers might well have asked what it is that makes God’s Word so secure. We have a natural tendency to trust what we can verify by our senses, and when that isn’t possible, we look for an eyewitness, someone who was there. How then can we be expected not only to rely on Scriptures written centuries ago but even give them greater weight than the evidences of our senses? Peter anticipates the question and provides the answer. The answer is inspiration.

Peter doesn’t use the word inspiration here. Indeed, the word is only found once in our English New Testament, in 2 Timothy 3:16, where it could be literally translated, “God-breathed.” But while Peter doesn’t use the term, he gives a more comprehensive account of how inspiration works than any other New Testament writer: “For the prophecy came not in old time by the will of man: but holy men of God spake as they were moved by the Holy Ghost” (v 21).

These are crucial details. First, Peter emphasizes the provenance of Scripture – it comes from God. Neither Moses nor any other writers used by God in the writing of Scripture decided of their own volition that they would write Scripture. The Bible is God’s revelation of His person and character and it originates with Him and not with man.

Next, Peter tells us about the people who were used. There is a paradox here that we cannot fully understand. God was inspiring Scripture; when written down, it would be the word-perfect revelation of divine truth. But personality still matters. It matters because the writers had to be holy men. It matters too because, as we read the books of the Bible, we recognize individual vocabularies, individual styles, and individual personalities at work. The inspiration of Scripture does not mean that God dictated His Word to secretaries: the process was more complex than that.

Finally, Peter describes the power behind inspiration – the human authors of Scripture were inspired; they were borne along by the Holy Ghost. This is what Paul means in 2 Timothy 3:16 when he speaks of Scripture as “God-breathed.” It is ever the work of the Holy Spirit to reveal God. He was involved at Creation and the Incarnation. He is central also to the great work of inspiration ensuring that as the Scriptures reveal God, they provide us with a basis for our faith that is absolutely solid, that is “more sure.”

There are two other important details about inspiration not featured in this passage. When we use the term inspiration, it is often useful to define more carefully what we mean by that term. We believe that the Bible teaches the plenary and verbal inspiration of Scripture.

Plenary inspiration simply means that “all Scripture is given by inspiration of God” (2 Tim 3:16). In other words, all of Scripture reveals God, and we need all of that revelation. Genesis 1:1 is as vital as John 3:16, but so too is Ezekiel 3:3. There is not a verse of Scripture that we can do without. We should also note that all Scripture is equally inspired. There is a trend in some circles to differentiate between the value of the directly spoken words of Christ and Paul’s epistles. But this misses the truth of plenary inspiration. In truth, the epistles of Paul or of John are just as much the Word of God as the Beatitudes.

The verbal inspiration of Scripture is equally important. It holds that God did not simply inspire the writers of the Bible with general ideas and then leave them to figure out the best words with which those ideas were to be expressed. Again, 2 Timothy 3:16 makes this clear. Paul does not say that the ideas behind Scripture were given by inspiration. He does not even say that the books of the Bible were given by inspiration. Instead, he focuses on what is written (the word translated Scripture is “graphe,” literally “writings”), and as words and not concepts are written down, it must be the very words and not merely the ideas that they embody that God has given by inspiration. Other passages also speak of divine inspiration of words (2 Sam 23:2, cf Acts 1:16; Jer 1:9). Similarly, the Lord Jesus Himself drew the attention of His enemies to individual words of Scripture. In Matthew 22:41-46 and John 10:34-36, He bases His argument on the individual words of Old Testament Scripture. So, too, does the Apostle Paul in Galatians 3:16 where the difference between a singular and a plural, a difference of letters rather than words, is shown to be the result of divine design and inspiration.

In Matthew 5:18, the Lord Jesus promised “one jot or one tittle shall in no wise pass from the law, till all be fulfilled.” In speaking these words, He was making a clear claim for the certainty of Scripture. But He was also making a claim for its accuracy, right down to the dots on the i’s and the crosses on the t’s. God does not want us to be unsure of our ground, to be uncertain in our understanding of His person and ways. In His infinite and sovereign wisdom He has provided us with the Scriptures. In order that we might rely entirely upon them, He has given them by means of plenary verbal inspiration and we can rest on the “more sure word of prophecy.”