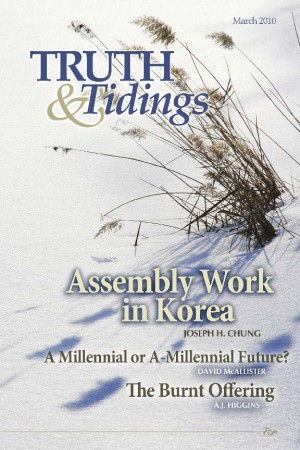 Like people of other Gentile nations, Koreans have been under darkness and influenced by various superstitions for centuries. Buddhism came to Korea about 1,600 years ago during the Three Kingdom Era. In A.D. 1392, the Choseon Dynasty, the last dynasty, banned all religions while enforcing the ethico-philosophical system of Confucianism as the ruling system for society. However, in practice, Buddhism still captivated the hearts, while Confucianism, as a moral standard, ruled the minds of Koreans for many centuries. When Japan invaded Korea in 1592, Portuguese Jesuits served in the Japanese military as chaplains and indirectly introduced Catholicism to Korea.

In the late 18th century, a few members of the Korean intelligentsia began to accept the Catholic faith while staying in China. However, the alarmed authorities began to persecute Catholics, perceiving them as a threat against Confucianism. About the same time, Choseon closed its borders to protect the country from superpowers. In 1866, Robert J. Thomas, a Welsh missionary, was working as an interpreter on the American merchant ship, the General Sherman. On its last fateful voyage down the river to Pyongyang, the Choseon army attacked the ship and set it on fire. Thomas, standing on the deck of the burning ship, opened his case of Bibles and flung them to the people on the river bank. Finally, with his clothes on fire, he leaped overboard and tried to offer his Bible to a waiting soldier who then transfixed him with a spear. Among the many spectators, a man named Park Young-Sik picked up one of the Chinese Bibles scattered on the sand. Back home, he covered his walls with the pages of that Bible. Later on, his house would become one of the first meeting places for Christians in Pyongyang.

In 1872, John Ross, a Scottish linguist and Presbyterian missionary, came to Manchuria, where he met Suh Sang-Yun, a Korean man fluent in Chinese. Westerners were still unable to enter Choseon, so in 1882, in Manchuria, they published the Gospels of Luke and John. Also, from outside Korean territory, in 1887 they completed the New Testament in Korean.

In September of 1884 an American diplomat, Dr. Horace Allen, came to Han-Yang (Seoul) as an American diplomat. A few days after arriving, Prince Min Young-Ik, the Queen’s nephew, was severely wounded in a terrorist attack. Dr. Allen saved his life with a minor operation. As a result, King Go-Jong lifted persecution against foreign religions, and even established the first hospital (Gwang-Hae-Won) with the royal treasures. The next year, Presbyterian and Methodist missionaries from America arrived in Seoul. Underwood and Appenzeller established the YMCA, the first two Protestant churches, and the first schools for commoners, which today are Yonsei and Baejae Universities in Seoul. In 1893, the British and Foreign Bible Society established the Seoul Bible House. By 1900, the four Gospels and the Acts were published in Korean and the complete Korean Bible, in contemporary grammar and style, was first published in 1910. That same year, Choseon was annexed by Japan and remained a colony for 36 years. Under colonial rule, Imperial Japan enforced Shinto worship and tried to exterminate Christianity in Korea.This played a major role in the resistance movement. For many sad reasons, the churches in Korea, which were mostly Presbyterian to begin with, gradually became legalistic and lost the life-saving gospel. At the end of WWII, Korea was liberated from Japan, but joy soon turned to disillusionment when the nation was divided by the Soviet Union. In 1950, North Korea invaded South Korea and this tragic civil war lasted for three years. The western media brought the former Hermit Kingdom into the spotlight and many flooded into South Korea, including some evangelists. Though small in numbers, Christians began to appear in the mid 1950’s.

The first assembly missionary, Edwin A. James, who was saved at the age of 10 in Mount Joy Gospel Hall in Newport, Wales, stepped onto Korean soil on May 23, 1962. In April 1964, with some believers, Mr. James gathered in His Name at Noryangjin, Seoul. He traveled to the provinces and helped plant assemblies, and many came to the Lord in his tent meetings. In 1965, Wilbert Kirk from Northern Ireland joined him for assembly work. Soon Dunham, Roller, and others from America, arrived and helped the assembly and worked for the Emmaus Bible Correspondence School. In 1972, Earl Ritchie from Canada came to Seoul. While teaching English to college students in Seoul, he helped the assemblies in Korea. He established Evangelical Publications, where valuable assembly literature has been printed and published in the Christian magazine, Torch, since 1977. In 1971, the second assembly in Seoul was born. Thereafter, the number of assemblies multiplied; there are now close to 250.

Even though Korea passed through a painful 20th century, I am thankful for the mercy of the Lord in visiting my nation with the gospel and His truth. Remembering that Jeshurun kicked when she waxed fat, I pray that Korea will not forget His mercy. Sad to say, in the present materialistic society of Korea, gospel work grows increasingly difficult. We painfully feel that the day of the little things seems to have arrived. May the Lord have mercy on us.

For more than six decades, my fellow Koreans in the North have been blinded and isolated, both physically and spiritually, under their pathetic, atheistic regime. In His mercy, we pray that a day will come soon, before His Coming, that the lifesaving and transforming message of the gospel and His truth will be freely proclaimed to the ears of people oppressed for so long.

Reflecting on the gospel and assembly work in South Korea, I am deeply grateful to my Lord and give the honor and glory to Him. We cannot trace the story of the early workers’ love for the Lord and their sacrifices and dedication for the gospel without tears. They are truly worthy to be respected. May the Lord bless the furtherance of the gospel and may a healthy assembly testimony flourish for His glory and for the benefit of many in Korea.