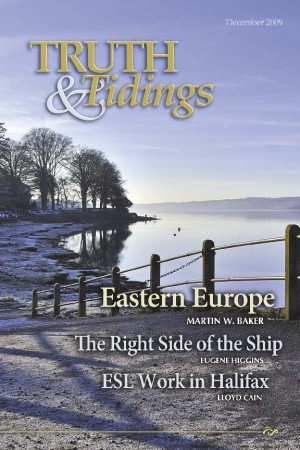 Are we in “the Laodicean age” and are assemblies “Laodicean” in character?

John records the messages that the glorified Son of Man sent to the seven specified assemblies in Asia (Rev 1:11). The messages dealt with matters that affected the testimony of those assemblies. Sadly, the messages expose how greatly local circumstances can affect and ruin assembly testimony. The messages also describe conditions that can exist in any assembly at any time between Pentecost and the Rapture of the Church.

When the Lord spoke of “the mystery of the seven churches” (1:20), He indicated that in His messages to those seven assemblies, He was also unfolding truth that we can know only by divine revelation. In the previous verse, He outlines the book: “the things which thou hast seen, and the things which are, and the things which shall be hereafter” (v 19). “The things which thou hast seen” include the vision described in the previous verses (vv 9-18). “The things which shall be after these things” (YLT) connect directly with chapter 4. It begins, “After these things I saw …” (v 1 YLT), and includes the events from chapter 4 through the remainder of the Revelation. In chapter 4, believers from this age (“the 24 elders”) are in heaven and the events of chapters 4 and 5 are the prelude to the seven years of tribulation. John being called up into heaven (4:1), therefore coincides with the Rapture of the Church. “The things which are” refers to the seven messages to the assemblies (chapters 2, 3). The fact that chapter 4 begins with “after these things,” however, shows that what the Lord describes in those seven messages will continue until the Rapture. Further, “after these things” indicates that these messages involve a chronological sequence.

This then is the mystery which the Lord is unfolding. The seven messages disclose the main influences in church and civil history that have affected testimony for God from John’s time until the Rapture. However, God is able to preserve His testimonies despite these influences.

Sadly, the characteristic influences of “Philadelphian testimony” seem to be past. Surely we must be near the Rapture. The prevailing spiritual conditions around us are like those that affected the Laodicean assembly. In their inability to discern their own true spiritual state (3:17, 18), we have a searching warning of our liability to spiritual blindness. On the other hand, we cannot fall into the mentality that testimony for God is essentially lost in our times – it’s “the Laodicean age.” In the midst of “Laodicean conditions,” so evident in our times, believers who give themselves to personal fellowship with the Lord (v 20) will contribute to maintaining testimony that is faithful to Christ.

What was the role of speaking in tongues?

Paul makes it clear that speaking in tongues was a warning message to unbelieving Jews. He quotes from Isaiah 28, “With men of other tongues and other lips will I speak unto this people; and yet for all that will they not hear Me, saith the Lord” (vv 11, 12). This does not mean that God addressed them with the message of the gospel in a foreign language. Acts records three accounts of speaking in tongues (2:4-11; 10:44-46; 19:6). Two of the accounts describe what they said: they spoke “the wonderful works of God” (2:11) and “they heard them … magnify God” (10:46). Unbelieving Jews heard words of praise to God in foreign languages. So often they had praised God with their Hebrew Psalms, but God was now moving away from the Jews to the Gentiles. The desired affect of this was that “through their fall salvation is come unto the Gentiles, for to provoke them to jealousy” (Rom 11:11). The gift was temporary and ineffectual: they would not hear.

Paul enumerates the features that marked the immoral cesspool of the Corinthians (1Co 6:9, 10) and adds, “Such were some of you” (v 11). Salvation, however, had made a difference. They had a righteous standing before God (“justified”) and were set apart for God (“sanctified”). Interestingly, the first verb in that sequence is “washed,” which Greek scholars point out is in the middle voice. The other two verbs that follow it are passive. God had justified and sanctified them. English has only an active and a passive voice for verbs, but the middle voice of the Greek verbs expresses that the subject either is acting in his own interests or on his own behalf or is participating in the results of the verb’s action. At least two possible interpretations express this.

This word “washed” occurs in only one other New Testament passage where Ananias told the new convert Saul “Arise, and be baptized, and wash away thy sins” (Acts 22:16). This verb is also in the middle voice. By being baptized, this Jew (who avowed that Jesus was accursed) was now publicly disowning that viewpoint. He was not being cleansed before God from his sins; he was declaring before others that he was finished with those sins. Could Paul then be telling the Corinthians that they had publicly disowned their former sins by being baptized? In support of this, it seems noteworthy that sanctification and justification are not in chronological order. Chapters 3 to 8 of Romans place justification first, then sanctification. So “washed” (if it refers to baptism) followed “sanctified,” which followed “justified.” This is one possible interpretation.

In Revelation 7, the great multitude (v 9) had “washed their robes, and made them white in the blood of the Lamb” (v 14). Although the word in both passages is “washed,” each is a translation of two different Greek words. The verb in Revelation 7 is active. They had acted to wash their robes. In 1 Corinthians 6, Paul is saying that the Corinthians had acted on their own behalf and participated in the result of that action (middle voice), being cleansed from their sins. It must be clear that the cleansing power was “the blood of Jesus Christ, God’s Son” (1Jo 1:7), but Paul could be emphasizing that being washed from their sins at conversion was certainly in the interest of the Corinthians. Why would they now turn for justice to those who practiced the sins from which they were once so interested in being cleansed? This is a second possible interpretation.

Neither interpretation seems to relate to the truth of regeneration, the Spirit’s imparting of spiritual life.