The state of S�o Paulo is in the southeastern part of Brazil and is the richest and most populous state in the country. Since last writing about the work of the Lord in this part of Brazil, conditions continue much the same. While there is much to encourage our hearts, there are many difficulties. If we look at the assembly in Descalvado, the oldest assembly in the area where we spend most of our time, the trend is not encouraging.

Some 40 years ago we were able to have 50 children gathered in our little portable hall, and about 30 or more at the gospel meeting in the evening. Now the assembly has more than tripled in number, but we only get less than 10 children in to hear the gospel and still just about 30 at our gospel meeting. The steady growth of early years has slowed, and in many cases stopped or even gone into reverse.

Looking more closely at this situation, which seems to be general throughout the state of S�o Paulo (and I fear is true of many countries), we see some hard facts which need to be faced.

The first difficulty that comes to mind is the natural opposition of the human heart to God. But that doesn’t fully explain our problem. In those good times when it was relatively easy to get people to come to a gospel meeting, man’s heart was just as rebellious as it is today. While some assemblies do reach the children and still get good numbers at their gospel meetings, this is more the exception than the rule.

Looking over these assemblies in the state of S�o Paulo, I can see a great change in the material condition of the saints. As a general rule, today they are much better off financially than a few years ago. They have more money and more comforts. Globalization brings first-world conditions to this part of the country, so the unsaved would rather have a weekend on the beach or in the country than come to hear the gospel. Of course, when Dad and Mum go off for the weekend by the lake, the children go along, and they too miss the opportunity to hear the Word.

And even for those who stay at home, technological progress has made sure that they miss nothing. They can have, in the comfort of their own homes, all that the others are getting in the world’s pleasure dens. And there is no time to go out to a gospel meeting!

Sad to say, this has affected the saints too. As a general rule, everything that catches on in the world eventually seeps into the assembly, and here in S�o Paulo, not all the saints are as zealous in spreading the gospel as they once were.

I don’t know if it is a cause of the previously-mentioned difficulty, or a result of it, that makes some feel they must follow the trend and keep up with the others. The believer ,while employed and perhaps trying to keep his job, or even while at school, feels the tremendous pressure that almost compels him to do post-graduate courses, refresher courses, and also to work shifts, with varied working hours. The saint who would not have considered missing a meeting of the assembly some years ago, now is happy if he can break bread on alternate Lord’s Days.

Another great difficulty we face is the phenomenal growth of a pseudo-gospel. It is sweeping over the state of S�o Paulo at an alarming rate and hundreds of thousands are deceived and swept away on the waves of vain delusion. The preachers of this false gospel are so well organized, and so well prepared that they speedily gather into their fold the unwary and the seeking ones, with an empty promise of material prosperity and perpetual perfect health. This is merely the bait that covers the hook. They do not preach Christ; they blaspheme His lovely Name. And there is such a variety of promises, calculated to satisfy the longings of all, that it becomes increasingly difficult to preach the gospel here. But these difficulties need not alarm us!

Sebasti�o was an honest, hardworking man with a young family when he heard the gospel. He began to attend frequently and learned his need of salvation, but for months he stumbled over the truth, “he that believeth hath.” One night, unable to sleep, concerned about his soul, he got out of bed, and as he kneeled before God, the light shone in and God saved him.

Our Lord forewarned us that if the world hated Him, it would also hate His followers. What the gospel presents does not attract the man who wants earthly glory. Deluded by the devil, man prefers the transient pleasure promised by sin (and seldom fulfilled) to eternal glory in Christ. Yet we still see men and women broken under the sound of the gospel and living to prove that the gospel is the power of God unto salvation. If only we were more like earlier Christians, men and women of prayer, who knew God in an experimental way!

There is no reason for discouragement. Difficulties can never hinder the work that God is doing, and the more we learn to trust in Him, the more our difficulties will become a cause for rejoicing as we see God’s own hand working for our eternal blessing. The gospel is still God’s power unto salvation, whether we think of S�o Paulo or any other place.

May every difficulty which is overcome enable us to trust Him more, that we might see Him in every circumstance and rejoice while the tempest rages!

“God moves in a mysterious way,
His wonders to perform.
He plants His footsteps in the sea,
And rides upon the storm.” 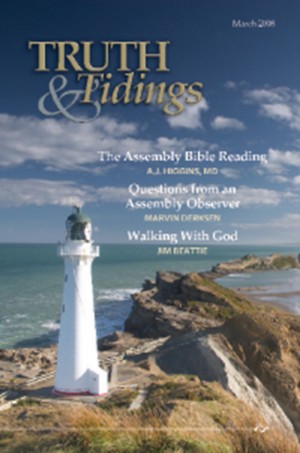