There have been many debates about whether the Christian may or may not eat blood. At the heart of the matter is: “For it seemed good to the Holy Spirit and to us, to lay upon you no greater burden than these necessary things; That ye abstain from meats offered to idols, and from blood, and from things strangled, and from fornication: from which if ye keep yourselves, ye shall do well” (Acts 15:20, 28, 29).

Under the Law, we have a number of texts which forbade the practice of eating blood[1]. However, does this restriction under the Law apply to the Christian era?

One of the arguments advanced is that this prohibition was imposed in Genesis 9:4 before the giving of the Law and therefore is not to be limited to the people of Israel. In reply, it should be noticed that there were several ordinances given before the Law, such as animal sacrifices, clean and unclean animals, circumcision, tithing, and this interdiction to eat blood which were confirmed by the Law but rendered null and void by the coming and the work of the Lord Jesus Christ.

We read in 1 Corinthians 10:25, “Whatsoever is sold in the shambles that eat, asking no question for conscience sake: for the earth is the Lord’s and the fullness thereof.” In Colossians 2:20-22, we are asked the following question: “Wherefore if ye be dead with Christ from the rudiments of the world, why, as though living in the world, are ye subject to ordinances, (Touch not; taste not; handle not, which all are to perish with the using;) after the commandments and doctrines of men?”

Without exception, in the texts quoted, the Holy Spirit uses the verb “eat.” For example, in Leviticus 17:12, we read: “Therefore I said unto the children of Israel, No soul of you shall eat blood.“

It follows that in Acts 15 and 21, we would expect to read “abstain from eating blood” and not just “abstain from blood,” but this is not the case. These two passages do not supply us with a verb; thus we may legitimately ask what it means to abstain from blood. We discover in Ezekiel 33:25 that there was a question not only of eating blood but of shedding it. Then consider what the Lord Jesus said to the scribes and Pharisees: “Woe unto you, scribes and Pharisees, hypocrites! Because ye build the tombs of the prophets, and garnish the sepulchres of the righteous, and say: if we had been in the days of our fathers, we would not have been partakers with them in the blood of the prophets” (Matt 23:29-30). In the context it is quite clear that the scribes and the Pharisees claimed that they would not have shed the blood of the prophets and not that they would not have eaten it.

In Acts 15, certain Jews from Jud�a were troubling the saints in the assembly by seeking to impose the Mosaic Law. For this reason Paul and Barnabas went up to Jerusalem to settle the problem. The conclusion of the deliberations of the assembly was summed up by the recommendations that we read of in Acts 15:23-29 and repeated in Acts 21:25.

The first recommendation was that the saints in Antioch should abstain from the pollutions (Acts 15:20) and meats offered to idols. The sin of idolatry is an affront to God and to eat meat that had been knowingly offered to idols is to participate in one of the most serious sins described in the Word of God.

The second recommendation was that they should abstain from blood. As we have seen above, for this prohibition to make sense, we must introduce a verb. Were they to abstain from eating blood or were they to abstain from shedding blood? Given the fact that the Christian is no longer under the Law, it would be more reasonable that this refers to the shedding of blood. In Gethsemane, Peter shed blood when he cut off the right ear of Malchus, the high priest’s servant, but immediately the Savior healed the severed ear (Luke 22:50-51) thus underlining the non-violent character of the Christian faith.

The third recommendation is more difficult to determine. What does it mean to abstain “from strangled”[2]? (Acts 15:20). The classic interpretation of this expression is that the believers were not to eat the flesh of animals killed by strangling, for it is assumed that the blood was still in the animal[3]. But we may legitimately ask if it would be allowable to eat an animal or a bird that had been strangled and then its blood poured out? The word “strangled” is neither explained nor qualified and we believe it to be unwise to speculate as to what this particular restriction implied. Having said that, it should be noticed that shedding blood does not necessarily involve taking life whereas strangling deprives the body of the “breath of life” (Gen 2:7 and 7:22).

The fourth recommendation is that the believers should abstain from fornication. Again in his first epistle to the Corinthians, the apostle deals with this very sin that was defiling the fellowship of the assembly.

In conclusion, we believe that these four recommendations deal with idolatry, bloodshedding, murder, and immorality which, given the environment of the times had far more relevance than that which is usually envisaged.

Certain religious movements use Acts 15 to forbid the use of blood transfusions, imposing their particular interpretation of the text, affirming that accepting a blood transfusion is to eat blood. Leviticus 17:11 teaches us that the life of the flesh is in the blood. A blood transfusion is used, not to destroy the blood but to put it to use to perpetuate life, being a vital life-giving element to the flesh. 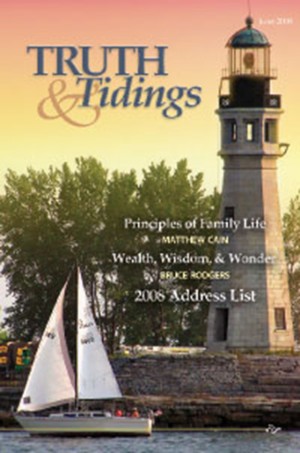