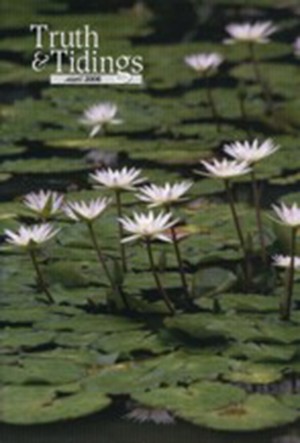 I was born and grew up in West London, England, and was raised as a Roman Catholic. I attended a Roman Catholic primary school until I was eleven years old, after which I attended a normal state secondary school. Here I was taught things that caused me to question my religious upbringing and beliefs. The religious education teacher spent much of his time undermining the Bible, and teaching us about various non-Christian world religions. In the science lessons I was taught evolution.

The eventual effect of this was to cause me to abandon all I had ever believed as a Roman Catholic and to become an atheist. Studying science at university helped reinforce me in my unbelief. After graduating and leaving university, I came in contact with a believer from the local Gospel Hall who invited me to go to the gospel meeting the following Sunday. Out of curiosity I went. I found the hall very different from what I was used to. There were no crosses or statues. Instead, written across the wall behind the pulpit were the words “Jesus Christ is Lord,” words I later found in the Bible. The preacher was not a clergyman – just an “ordinary” individual. At my first hearing of the gospel I did not really understand it, but what impressed me was the preacher’s absolute conviction. It was clear he believed what he was saying!

I commenced attending the gospel meeting every week and started reading the Bible. After a few weeks, the believer whom I had first met lent me some books written by scientists who believed in creation. When I read them I realized that all I had been taught regarding the origin of life was wrong and I became a convinced creationist. Now I was in a quandary: what about sin and eternity? By now I knew what the message of the gospel was: repentance toward God and faith toward the Lord Jesus Christ. It was at this point that God began to convict me of my need of salvation. Finally, one evening I began reading through John’s gospel from the beginning. When I reached chapter 19, as I was reading the fulfilled prophecies regarding the crucifixion, I noticed the marginal reference at verse 37, “Another scripture saith, ‘They shall look on Him whom they pierced.’”

I turned to Zechariah 12:10. Here I read the words of Jehovah Himself, “They shall look on Me whom they pierced.” As I read these words, the reality came home to me that God had become Man and had died for me in order to pay the penalty for my sin; I accepted the Lord Jesus Christ as my own personal Savior. It was 10:30 pm on Saturday, June 19, 1982. Six weeks later I was baptized, and two weeks after that I was received into the fellowship of the local assembly in Uxbridge, England.

To God be the glory, great things He hath done!