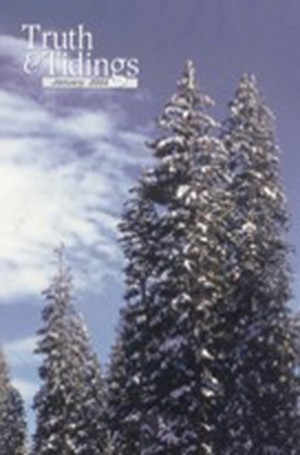 It is likely true that one of the most rare experiences in modern society is silence. A lady told me this week that she bought a device that makes a constant noise and without it she cannot sleep. We are accustomed to seeing people with earphones strapped to their heads as they go out for their daily walk. It is common to hear noises from an automobile that passes us on the street and sends shockwaves into our bodies. I am very certain that these people do not know the following facts: “regular exposure of more than one minute to 110 decibels of noise can result in permanent hearing loss. Prolonged exposure to any noise above 90 decibels can cause progressive hearing loss.” It is getting more and more difficult to find a place of quietness. It is very different to listen to recorded hymns than to listen to the noise of the world.

“Stop and think!” Satan uses every device possible to keep this from happening. The Sovereign Lord can save people under any circumstance, but it is absolutely necessary that a sinner be brought to silence before Him. “Now we know that what things soever the law saith, it saith to them who are under the law: that every mouth may be stopped, and all the world may become guilty before God” (Rom 3:19). We often use an expression, “coming to an end of yourself.” These exact words are not found in Scripture, but the truth of them is there, and every salvation experience has this in common: the sinner is brought to silence “before God.” Excuses are gone and guilt is written as plainly on the heart as the law was written on the tables of stone.

To the Lord Jesus, the Roman judge said, “Hearest thou not how many things they witness against thee? And He answered him to never a word; insomuch that the governor marveled greatly” (Matt 27:13-14). But we have far greater cause than Pilate to be amazed at the silence of the Lord. Jeremiah asked the question, “What wilt thou say when he shall punish thee?” (Jer 13:21). The only One who could ever have rightly claimed that He had no sin to be punished was silent. His silence is reason for eternal praise.

If true silence is so rare in this world, then it follows that peace in the mind and heart is just as rare. There are so many voices coming from so many directions. As an example, millions of people are harassed regularly with telemarketing phone calls. “Sound” is invading every area of our lives. Thank God for the Lord of All who “arose, and rebuked the wind, and said unto the sea, Peace, be still. And the wind ceased, and there was a great calm” (Mark 4:39). May His voice speak peace to our hearts!

We think of prayer as “speaking to God.” Words are the expressions of our worship, thanksgiving and requests (Phil 4:6). However, words may be a hindrance to true communion. “Be still, and know that I am God” (Psalm 46:10). In a troubled world of turmoil and strife, how blessed to learn that He still leads beside “still waters” (Psalm 23:4). Truths to be learned in the silence of His presence cannot be learned anywhere else. It is very real to just be silent before Him. Our lives are often too busy for such experiences as silent communion with the Lord. We are being robbed of the most precious privilege. May we learn to “Be still … and know … God”!