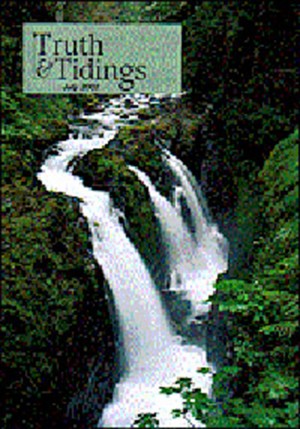 A lucid unfolding of truth relating to what we know to be most precious.

The full impact of her remark did not register immediately, but later reflection soon revealed its significance. She was a pupil in a Roman Catholic High School. After hearing an explanation of what assembly testimony involved, with special reference to the breaking of bread, she exclaimed, “So you believe the Lords Supper is a remembrance of the sacrifice of Jesus, whereas we believe it is a re-enactment.” Precisely.

This is just one illustration of how this precious ordinance of remembrance has been smothered by centuries of liturgy, ceremony, sacramentalism, and ecclesiastical tradition. Those layers of human addition must be peeled back to reexamine what was established by the Lord Himself.

For a complete understanding of this NT ordinance we must take into account the regulation of the supper as directed by the apostle Paul in 1 Corinthians 10 and 11, together with the repetition of the supper as indicated in the Acts. In our present study we will mainly focus on the revelation of the Supper as disclosed by the Lord Himself in the record of the first three Gospels. Just as some features of the first Passover were not repeated in its later commemoration (such as the sprinkling of the blood on the door posts), so some details of the Supper in its institution cannot be repeated by later generations. There were, however as we shall examine, significant features established at its institution which are good for all time.

The little group gathered in the upper room. That place was divinely marked by a guiding providence, and then divinely graced by the presence of the Lord Himself. This supper did not commence amid the glitter and the gold of the temple of Herod. Far from ceremony, ritual and formality, it was located in a spacious room, simply but suitably furnished. That room, we are informed by Luke alone, was a guest chamber.” This is the very term he had already employed in the record of the Saviors birth: There was no room for them in the inn.” Now, so suitably, an inn reappears at the end of the public ministry. In this “inn,” however, there is room for Christ, and it is large enough to accommodate His apostles and the ministry which He gave them on that hallowed occasion. How fitting that this ordinance should be instituted in such simple surroundings for, when we remember Him, we are conscious of the night around and anticipate that morning movement which will take a pilgrim people to their heavenly home.

The Lord selected the Passover season as the occasion for the institution of this Supper. This new supper was very distinct from the old in form, but very similar in significance. It would remind His followers of a greater sacrifice as well as telling them of a greater exodus. As in the Passover, there would be retrospective and prospective dimensions clearly emphasized in the later words of the apostle, “the Lords death till He come.” It is probable that the references which the Lord Jesus made on the occasion regarding the kingdom and the new covenant, indicate that our future anticipations, when we celebrate the supper, should reach beyond the rapture and take in, not only the glory of millennial times, but also the consummation of an accomplished redemption in the eternal state. Only then will the wide effects of the “body given” and the “blood outpoured” be fully realized. Unlike the Passover this would not be a yearly commemoration but, as we know from Acts 20:7 and 1 Cor 16:2, a weekly one. Further, they would not now stand and eat as in the original Passover, but each of the three Gospel writers mentions the “reclining company.” There would be rest as they remembered their spiritual redemption.

The procedure at the Passover Supper was not at all strange or new to the disciples; all of them had participated in this many times. In the proceedings that evening, however, there was a stage reached when the Savior took into His hands materials which were common objects on a Passover table and gave them a significance they never had before. He not only employed bread and the cup (evidently, a cup of wine) but He interpreted them, explaining that they would thereafter serve as symbols respectively of His body and blood. They were not in any sense types but simply symbols. A clear understanding of this will not only help us avoid the errors of transubstantiation and consubstantiation but will also keep us from any unnecessary preoccupation with what kind of bread or what kind of wine should be used. These common materials, generally available in any part of the habitable world, were employed as symbols of realities far beyond themselves.

Had we only the record of Lukes Gospel one might surmise that Judas was present at the institution of the Supper. However, a comparison with other Scriptures, especially 1 Corinthians 11:23, makes it clear that Judas had already left to do his worst. The exposure of the traitor just before the institution of the Lords Supper must have taken the little band with great surprise. So unsuspecting were they of his identity that each asked “Is it I?” This enquiry later gave the apostle Paul a precedent for his exhortation, “but let a man examine himself, and so let him eat of that bread, and drink of that cup” (1 Cor 11:28). While Johns Gospel does not record the institution of the Supper, he does give us the account of the feet-washing which the other three Gospel writers omit. His record indicates the moral conditions suitable to the Supper and such attitudes of holiness and humility as befit those who share fellowship with the Lord at His table.

We are indebted to Lukes Gospel for an account of the strife which was witnessed at the Supper. Having heard of one among them who would be the “worst,” it seems the disciples turned to a competitive spirit of self-seeking asking “which of them should be accounted the greatest” (Luke 22:24). How sad that there was petty squabbling among men who were handling symbols of the humiliation and sacrifice of Christ. At a later stage the apostle Paul had to rebuke another form of strife: the social class distinction which was spoiling the celebration of the supper in the assembly at Corinth. All of this is a salutary lesson to us that we could, if not judged, cultivate at the Supper a spirit which would be a contradiction of its very meaning.

Again, it is Lukes Gospel which informs us that on the occasion of the supper, the Lord solemnly informed the disciples of the foes arrayed against the partakers of the symbols of His body and blood. There was the sifting of Satan which would shake the whole band, and especially Peter. The latters vulnerability was greatly increased by his own spirit of self-confident boasting. Closely allied with the sinister scheme of Satan and the vanity of the flesh was the hostility of the world, both religious and political. This would mean that this little band of hated men would need spiritual vigilance as well as physical protection. It solemnly reminded them and should remind us, of the harsh and hostile realities of the world where disciples would remember and represent a rejected Master.

The first two Gospel writers sweetly remind us that prior to leaving the room on the occasion when the Supper was instituted, “when they had sung an hymn, they went out into the mount of Olives” (Mark14:26; Matt 26:30). It has often, and with good reason, been suggested that this was the traditional Passover hymn, which included the Great Hallel, known to us as Psalms 114-118. How touching for the Lord Jesus to be the Leader of the praise in words such as we have in the resurrection and kingdom Psalm 118. The supper is still the occasion of singing, and while one does not advocate the singing of hymns as a crutch or a silence-filler, readers can recall many occasions of remembrance which have been greatly enriched by the singing of suitable spiritual and scriptural compositions given out with appropriate discretion. The same enrichment and stimulation of thanksgiving can be even better achieved by a reading of suitably selected Scripture, fittingly accompanied, at times, by comments which direct the hearts of those present to the person and work of the Lord Jesus.

As we reflect on the institution of an ordinance which we prize so highly, may we be dutifully exercised for the preservation of something of its pristine simplicity and solemnity. Let us avoid the clutter of man-made rules and regulations; the formality and stiffness of a rigid structure; the artificiality of affected worship. May we always take the emblems as though received from the once pierced hands of Him who first appointed them and ever recognize that He did all this “for us for the remission of our sins” and that we, in turn, “do this for a remembrance of Him.”