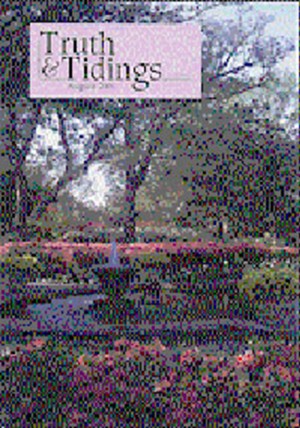 A veteran missionary relates his burden for a conference.

Shortly after I was saved in 1958, kind friends introduced me to the conferences which have been a characteristic of the work in Northern Ireland for many years. Such conferences were almost unknown to me until a short time before I was saved. I was quick to relish these occasions, and as transport became easier for me, I resolved to be present at as many as possible. In those impressionable days, it was almost inspiring to see the servants of God moving to their seats, and soon rising to pray. On many occasions they seemed to be so helped in prayer that for me the spiritual edification of the conference had already begun. Such was the edifying effect of these seasons of ministry, that I came to eagerly look forward to them, and although all did not rise to the same heights, there was always blessing in being there. For an American readership, it is important to state that many of the meetings known as conferences in Northern Ireland and in Brazil, are more generally known as “all day” meetings in North America.

The conferences referred to were all left to the Lord’s leading as to who, amongst those gifted to do so, might speak. I could see that this gave burden and exercise to all concerned and much of that deep exercise was obvious, as in the time of prayer several brethren poured out their sense of need before God. As I pondered the Scriptures, principally 1 Cor 14, the conviction developed that these meetings were carried on in accordance with the Word of God.

In 1967, 1 came to Brazil to help in the work of the Lord, and although the work was at its early stages, conferences had already become a feature. These were carried on just as in Ireland. As time went on and some progress was made in the Portuguese language, it became evident that there was an opportunity for me to try to help on these occasions. Over the years, a certain approach to the important matter of helping at conferences took shape, and this I share with readers.

Many years ago, in a Bible Reading in Lurgan, Mr. Albert McShane explained to us that wherever the presence of God was enjoyed in a meeting, there had been someone, perhaps more than one, before God in secret long before the meeting began. Ministry of the Word in conferences, as indeed on all occasions, must flow from exercise in prayer and dependence on God. But to private prayer can be joined public, united prayer as the saints are gathered to hear the Word of God. It thus became one s practice (in Brazil) to engage in prayer publicly before the time for ministry came. The sense of liberty or otherwise sometimes serves as a token of guidance as to whether to speak or not. The time of public prayer is very important, seeing that the need is so great and human weakness so evident on such occasions. God’s guidance is required, as well as His restraining hand, for embarrassing situations can spoil such sensitive occasions.

Whatever undercurrents may exist, it is very wrong to take advantage of a public platform to launch attacks on brethren with whom a disagreement has arisen. Obviously wrong practices amongst God’s people must be corrected in the fear of God, but this is rather different to the airing of personal grievances in a way which puts those who perceive it under tension and spoils the atmosphere. It can be very difficult, if not impossible, to recover that holy atmosphere which befits the ministry of God’s Word.

The writer has learned much from the example of unselfish brethren in their attitude to the subject in hand. Some dear brethren are very willing to sit quietly so that others may have an opportunity to take part. Such mutual consideration, which seems to combine easily with the sense of God’s guidance amongst those who are spiritual, is admirable. In similar vein, mention might be made of the quiet waiting before someone rises to speak, that in some places may be rare, but which nevertheless betokens dependence on the Lord as well as respect for other brethren. One readily concedes that there may be exceptions, when the burden and conviction is such that a brother moves forward more quickly.

The present article is written from a missionary standpoint, and against the background of a work where there are few brethren who can suitably take part, in comparison with some areas in the homelands. In these circumstances, it is grieving, to find oneself in such a meeting, with nothirig prepared for God’s people, when it is quite evident that both opportunity and need exist. I would say that where the suitable speakers are fewer in number, it becomes all who have the confidence of the saints for public ministry, to come to the conference with food for God’s people. This does not mean that there would be an absolute determination to speak, but it does mean that each brother is available should the Lord so lead.

Finally, I add a word as to the importance of relating the message to be delivered to the audience to which it is to be given. Is the audience, generally speaking, made up of simple Christians? Then reduce the amount of material to be presented, and stress the few points thoroughly, avoiding undue length. Keep a close eye on the congregation and be sensitive to their reaction (experience teaches the telltale signs). God can give help to regain attention where it has been lost, and He can give help to captivate almost the entire audience with the precious truth of the Word of God. If those taking part in ministry are for the most part commended workers, they must be careful to be realistic in their ministry, for while years in the work of God bring experience in that sphere, such men may not be up to date with the real life situations which some believers are facing. Those who keep current with the changing situations and difficulties will avoid making unreasonable demands in their ministry. To make such demands only leads to discouragement rather than edification.

Let us pray that as the return of our beloved Lord draws near, conferences for the ministry of the Word of God, carried on in dependence on the Lord’s guidance, will continue to be influential for God in the formation of Christian character and the maintenance of those principles that give strength to assembly testimony!