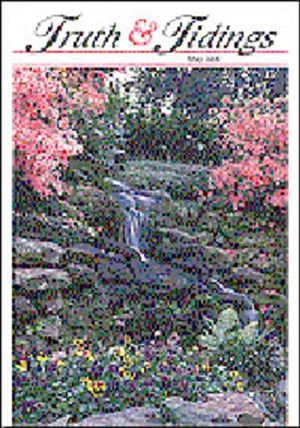 Our Heritage: London and Western Ontario

A New Commitment for A New Century

Epistle of James – An Overview

Gospel: This Was Their Story – Frank Pearcey

The practical epistle of James contains vital teaching for believers.

Lessons Learned From the Preaching and Pen of James

When we peruse the epistle of James, the Lord’s brother, we are immediately impressed with both the style and the substance. The style is that of the preacher standing in the synagogue, for the saints had not yet separated from the rest of the Jews. He therefore addresses a mixed audience from the twelve tribes of Israel. While most are believers who are still zealous for the Law, there are, nevertheless, those present who are apparently unconverted Jews and are admonished by James for the sins of materialism, misappropriation, and murder. James the preacher, on the other hand, uses a didactic style and moves quickly from topic to topic, illustrating his points lavishly with thirty pictures from nature and a number of references to the Old Testament Scriptures.

As to substance, James deals with many of the topics of the other preacher, Solomon, in the book of Proverbs. His topics also are those of the Preacher, the Lord Jesus, in the Sermon on the Mount. When we study James’ topics more carefully, we can see that he presents us with lessons in Salvation, Suffering, Supplication, Sin, Scriptures, Service, Separation, Strife, The Spirit, Submission, Satan, Speech, Shepherding, and Sickness. We will deal with some of these in this article.

James has not written, as was supposed by Martin Luther, “a veritable epistle of straw and devoid of evangelic character.” The epistle has an important place in the Canon when we see that its author presents a belief that behaves, a creed that controls conduct, and a faith that fulfils. While he presents, not the great truth of the apostle Paul concerning justification before God by faith, he does present the truth of justification before men by works. Paul later wrote that if Abraham were justified by works he “would have whereof to glory but not before God” (Rom 4:2). That is to say, he would thus and only thus be justified before men who could not see his faith but could see his works. James epistle could be entitled, “But Not Before God.”

James therefore uses such expressions as “Show me … ” and, “I will show thee…;” for he is dealing with a life changing faith and not an “easy believism” that does nothing to alter the course of one’s life. It is a faith that lives, a faith that loves, and a faith that is consistent with the light, for God is presented as the Father of Lights.

With James there are no gray areas. It is either black or white, and if the path is not consistent with the profession, then there is no possession of divine life in the soul.

As in Peter’s first epistle, where the addressees were “in heaviness through manifold trials,” so James sees the need to exhort his audience to “count it all joy when ye fall into divers testings.” These trials were for the “putting to the test” of their faith, for while Satan tempts us to bring out the worst in us, God tests us to bring out the best in us. Someone has said that the trials will either wear us down or polish us up which means that God is in the “adorning business.” He has adorned us with salvation (Ps 149:4), but he also adorns us by means of the trying experiences. Job named one of his daughters Karen-happuch which means “adorned.” This must have been Job’s evaluation of the trial after it was over, and he had seen the “end of the Lord, that the Lord is very pitiful and of tender mercy” (James 5:11).

But can you imagine their perplexity as they hear the preacher say, “Count it all joy…”? They had not yet learned the reasons for the trial, the reactions to the trial, and the results of the trial. Job’s friends assumed that all adversity was a consequence of crimes committed. They told Job that trials were always punitive. While the trial may be punitive as witnessed by David’s remorse in Psalm 51, the trial may be preventive as seen in Paul’s “thorn in the flesh” (2 Cor 12:7-10). It was given lest he should be exalted above measure because of the abundance of the revelations given to him. Paul needed the trial.

Trials however are predominantly for purging. In John 15:2 we read “every branch that beareth fruit, He purgeth it that it may bring forth more fruit.” Hebrews 12 teaches that the purpose of the trial is “that we might become partakers of His holiness.”

If these are the reasons for the trial, then how should the believer react? James exhorts them to react joyfully, to see that the trial will produce patience which has the thought of endurance and perseverance, and to not interrupt or interfere with the purpose of God in the trial.

The writer to the Hebrews outlined three possible ways believers could react to their trials. They were not to despise it; that is esteem it lightly, and not look for the hand of God in it. They were not to be discouraged by it, fainting under the child training of the Father. In 1 Samuel 30, all the people were greatly grieved by the capture of Ziklag, but David encouraged himself in the Lord his God. Finally they could be developed by it for it would yield “the peaceable fruits of righteousness to them that are exercised thereby” (Heb 12: 5-13).

What are the results of the trial? In Hebrews we have two: becoming partakers of His holiness and producing the peaceable fruits of righteousness. In James, we see believers who become “perfect and entire, lacking in nothing,” and who get to know experientially the end – the final purposes of the Lord.