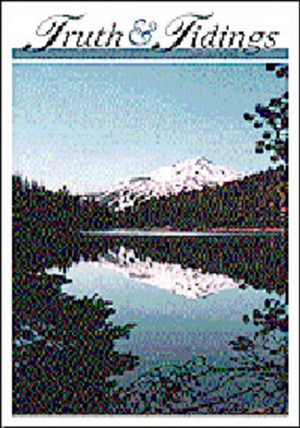 Timeless teaching on the local assembly

Now notice the next step after conversion. “Then they that gladly received His word were baptized.” First they received His word, then they were baptized and, “The same day there were added unto them about three thousand souls.” Here we have the beginning, not of the body, but of the local as sembly at Jerusalem. They had already been immersed in the Spirit into the one body (1 Cor 12:13), but now these newborn souls were added to the one hundred and twenty previously mentioned.

Here then we have the local church, and whatever light they afterwards received from God’s special vessel for this dispensation (the Apostle Paul), it never detracted from the seven things we see mentioned here that constituted this ideal local assembly. Although the Lord committed to the Apostle Paul the mystery of the gospel, Jew and Gentile forming one perfect man, the coming of the Lord, and other mysteries, and he was used by God to teach those mysteries, it never detracted from, but only developed what we have here. That is where many make their mistake. They tell us this is not a pattern. But we cannot dispense with any one of these seven things. The seven things mentioned here gave evidence of the commencement of the local assembly. Seven in Scripture is the perfect number, and here we have seven things that took place as the result of Peter’s testimony on the day of Pentecost.

On the day of Pentecost, when the Spirit of God descended, we have the beginning of the church which is Christ’s body. Man played no part in its formation. Christ, the divine builder, always builds in the right material. But now we see that which follows Peter’s preaching: the beginning of the local assembly at Jerusalem. God has committed this to human hands, and there may be failure. Consequently we need these seven things that go to make up the local assembly. It was this local assembly at Jerusalem that Paul persecuted before his conversion as we read in Acts 8.

We have noticed that the next step after conversion is baptism. One difference between the Spirit baptism and water baptism is this: the baptism of the Spirit is a baptism into a living union with the Head in Heaven and all the members. Water baptism is a baptism into Christ’s death. “Therefore we are buried with Him by baptism unto death; that like as Christ was raised from the dead by the glory of the Father, even so we also should walk in newness of life” (Rom 6:4). Some are letting believers’ baptism slip now, saying, “Oh well, these are days when people are so filled with human tradition, that it would not do to refuse to receive them into the assembly even though they are not baptized.” If we read through the Acts, we will not read of any being saved or professing to be saved who were not baptized.

Sometimes people (Christians, too,) say to us, “Well, then, you make baptism the door into the assembly.” No, it is before you come to the door. Reception into the assembly is the door. When I am satisfied (if I am applying for fellowship in an assembly) that is the right thing to do, then those among whom I want to be received, have the right to be satisfied with me, as well as I with them, but this is after I am baptized. To those who make the assertion, “You make baptism the door to the assembly”, we would say: Suppose some one else came to your assembly and said, “We like you folks. We have been at some of your meetings and are quite taken with them, and would like to come among you. We have not been baptized, and we don’t believe in immersion, but we will be immersed seeing you believe in it.” What would you do? You should instruct them as to what is right and what is wrong. You should give them light as to baptism, in spite of the fact that they already have life. Some say that life is the ground of fellowship into the assembly. No, the basis of fellowship is both life and light. If they do not see baptism in the Word of God, then they cannot have the obedience of faith, but they would be doing it simply because some one else says so. Just let them remain where they are until they do see it, seeking to instruct them from the Word of God. “The obedience of faith” will follow.

Added to the Assembly

The next step is, they were “added.” Thus we see God’s order: first salvation, next baptism, and then being added to the assembly. I was a Presbyterian for two years after God saved me. Then I was with the Baptists for two years. During these four years I was in the church which is His body, but never in the local church or assembly. Thank God that for over fifty years I have been in a local assembly, coming in and going out among the people of God, and I have never needed to go back among the sects and systems of men. That is what it means to be added. There was once a young woman from an assembly who went to a dance and there happened to be some one there who knew her as a professing Christian. He said to her, “What are you doing here?” That was an awful rebuke to her. If one can go to such places and do such things and then come and sit down at the Lord’s table, there is good reason to raise the question, “Have I had a meeting with Christ? Has the cross come between me and the world? Have I ever really known what it is to be added to an assembly of God?”

They Continued Steadfastly in the Apostles’ Doctrine

None of us has ever had to continue in the fellowship of the body, but it does depend on ourselves to continue steadfastly in the local assembly. When God saved some of us, we were so filled up with human tradition instead of the teaching of God’s Word, that we did not see the truth of the local assembly. It was not until after three years of my Christian life that I began to get a glimmer of it, and when I came “outside the camp” to the Lord, I said goodbye to a good Baptist church with a saved and spiritual preacher. They held the fundamentals of our salvation. Then why did I leave? They did not hold the fundamentals of God’s local assembly. God’s Word took me out, and that same Word has kept me out all these years.

We have already mentioned that we do not need to keep ourselves in the church which is His body. It does, however, depend on us to keep in the fellowship of the local assembly. It is a grand thing to be a steadfast Christian. It is nice, when one has been away from a place for many years, to come back and find the Christians still going on steadfastly, instead of having to say, “Where is so-and-so?” and hearing, “He does not come any more.” It causes us deep exercise of soul when we find there are some not continuing steadfastly. The conclusion of that wonderful chapter on the resurrection, I Cor 15 is, “Therefore my beloved brethren, be ye steadfast, unmoveable, always abounding in the work of the Lord.”

The sixth thing mentioned is the breaking of bread. What a blessed privilege it is to be in a place where we can gather at the Lord’s table, not at a table of man’s devising, and can remember Him every first day of the week! It is worthy to note in I Cor 11:25 we are “to remember Him (v. 26), to show His death (v. 29), to discern His body”(v.26), and to do this “till He come.”

If we get a grip of these things and they get a grip on us, we will not find it easy to stay away from the Lord’s table.

The seventh thing is prayer. Individual prayer is a good and wholesome practice, but how necessary and refreshing is the assembly prayer meeting! It is often said that you can judge the condition and spiritual tone of any assembly by the prayer meeting. We get a splendid example of assembly prayer in Acts 4:23-33.

The Lord grant that we may increasingly know what it is to “hold fast”; and, as the apostle said, “Continue thou in the things which thou hast been assured of.” There are some things we have learned and then have had the opportunity to prove them experimentally. That is like the old lady who had two letters “T and P” written in her Bible. Some one asked her what these letters meant, and she replied, “Tried and Proved.” Thank God, we have tried and proved His Truth. The Lord keep us steadfast Christians, “until the day dawns and the shadows flee away “