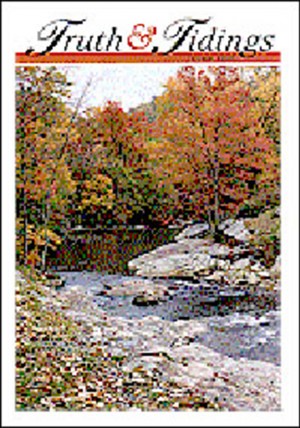 It is most natural that some may be inclined to judge the work in Venezuela as mere excitement and false professions when they hear of so many being baptized (as many as forty-eight at one time). So it behoves us to state the gospel we preach and the methods we use.

It is a grand thing to have a clear conversion. Personally, I was under conviction of sin for months before finding deliverance through Romans 5:6. 1 never attended a series of gospel meetings before I was saved and so knew nothing of modern high pressure methods of evangelism. I was convinced as to the reality of the Gospel through the testimony in the shipyard of dear Kenneth McKay, where we were serving our apprenticeship as marine engineers. “Mac” loved Christ and he told me 1 would be in hell if I did not get saved through trusting in the death of the Lord Jesus. Such theology, as a rule, does not produce mere professors.

All the brethren and sisters who labor with us in the work in Venezuela have the same clear and definite conversion. This clear and definite experience has naturally given character to all our preaching. We all believe in preaching the gospel that will, first of all, produce conviction of sin. We glory in the Epistle to the Romans. When we see sinners under conviction of sin, we try to help them. But we never ask anyone to hold up a hand in a meeting, to sign a card, “shake hands with the left hand” or come to a penitent form. We encourage all those who are troubled to have direct dealings with God and thus many are saved in their own homes – the thing we like best. We do, from time to time, pray for some individually in the ante-room of the Hall, if we believe they are ready to be delivered. Thus many a seeking soul has been led to Christ. But we are careful about this as there is always the danger of excitement, especially when others are getting saved in special meetings.

Then again, we have never felt free to use music in the preaching of the Gospel, nor do we use solo singing. We usually find that the Gospel preached in fellowship with God will draw the unsaved and genuine sons will be the outcome. In doing this we avoid the danger of sentimentality often produced in the sinner’s heart by good music and sweet singing, especially if the sinner has an ear for music.

Again, it must be remembered that a great many of those who are saved are won by the Venezuelans themselves in their regular assembly Gospel meetings, and naturally our brethren follow our example more or less in their way of preaching.

When anyone gets saved, they are encouraged to go to the meetings and in their first love they are quick to learn, for freshness of affection and quickness of understanding go together. They either see for themselves, if they can read the Bible, or else they learn at the Ministry and Bible Readings that they are new creatures in Christ Jesus. They leave smoking, gambling, drinking and all such vices. We do not know of a smoker in any of the assemblies. Some criticize us for this, but we cannot see that the smelling of weed is good for either soul or body.

Very many Venezuelans live in concubinage and it is a real sign of new life when they get married. My wife and I went to a marriage, on the outskirts of San Felipe, of a couple who had been good Roman Catholics, but who had lived together for thirty-seven years without being married. Their son, Pedro Castillo, got saved and he preached to his parents. First the mother and then the father trusted in Christ. Then they had a conscience about the way they were living. We happened to be in San Felipe for meetings and we were invited to be at their marriage. The Mayor of the city went in his car to marry them. We had a good preach to all present after the Mayor united them in a civil marriage, which is the only legal marriage in Venezuela. Then we asked the Lord’s blessing on the union. Mrs. Williams and I started to walk home to where we were staying when the Mayor overtook us in his car, stopped and asked us in and offered to take us home. After the usual remarks he said something like this: “Well, well, so old Gregorio and Maria have got married after living thirty-seven years in sin. Had they not got converted to the Gospel, they would have died as they lived. I am not an Evangelico but no sincere man can deny the power of the Gospel.”