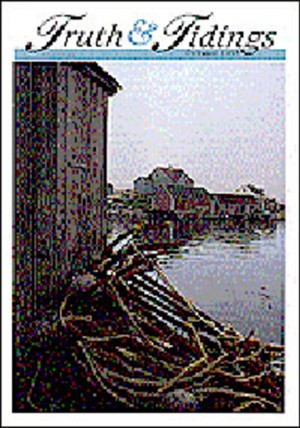 Editorial: Preaching the Word of God

Go Ye Into All the World – France

Taking the Gospel to A New Area

We are very pleased to introduce an article by our brother, Dr. Parks, dealing with the subtle yet effective means which the world and Satan use to influence the minds of men. We as believers are not impervious to this. The results of this can be seen in wrong thinking, anxiety, depression and insensitivity.

Most believers currently agree that we are living in what the Bible calls “the last days,” the period immediately preceding the Lord’s return. Much of what has contributed to this opinion is the inexorable and pervasive march of moral evil and social decay that has steadily and malignantly become a part of everyday life. Most of what we see and hear is frank and outright evil. Examples of these are the breakdowns of the family unit, easy and commonplace divorce, child abuse, pornography, the devaluation of human life, murders, terrorism, deceit, evil in high places and many others. Nevertheless, much of what enters the “personal computers” of our minds, forming our outlook, thought processes, attitudes and mindsets is seemingly innocent. We must remember how clever Satan is. He easily tricked Eve into disobedience by confusing her about what God had said and really meant. The Scriptures remind us that he masquerades as “an angel of light” (2 Cor 11:14). He tried to trip up the Lord Jesus, Whose defense against him was the truth of the Word of God. He went after Job by personal and family attacks. He went after Peter by causing him to stumble and deny his Lord. He went after Paul by discouragement over the “thorn in the flesh.” He got into Iscariot’s heart and doomed his soul. No wonder, then, that Paul warned the Ephesians, and us as well, not to give Satan a foothold in our lives (Eph 4:27). Today he is still going after men, women and young Christians by changing the way they think.

He uses the media, the entertainment world and the sports world. He uses music in a most powerful way. He uses trends, fashions, conformity to the world and peer pressure. But one of the deadliest methods he employs to get people to think his way is the cleverly and diabolically orchestrated use of advertising and commercial slogans. This article will investigate this phenomenon. Please do not minimize the truths presented, even if this is the first time you have ever thought about what you will read.

Solomon said, “as a man thinks in his heart, so is he” (Prov 23:7). Another wise man has said, “You are not what you think you are, but what you think, you are!” Satan is the god of this world (2 Cor 4:4). Paul tells us that one of our protections against becoming conformed to this world, and in essence to Satan’s thinking, is by “renewing our minds” (Rom 12:2), and by “bringing into captivity every thought to the obedience of Christ” (2 Cor 10:5). Consideration of these commonly heard and seen ad slogans, will show that Satan is very successful in using them to subliminally get men, women and especially young people to think his way. His way is totally opposed to God’s way, and his thinking is 180 degrees opposite to God’s way of thinking. As believers, we MUST be exercised to think as God thinks and not as the world does. Some of these examples are stark and clear-cut. Others are vague and at first, nebulous. But each will be compared with or contrasted with Scripture. The common themes are:

As we consider these specific examples, we may remember seeing or hearing them in magazines, on billboards or from the media. But advertising is now in public parks, on buses and trains, at airports and on the products themselves, with easily recognizable logos. Wall

Street has even encouraged companies to buy advertising space on the walls and in the hallways and cafeterias of high schools, to capture the minds and the market of the young. It is reported that elementary schools are next. As Christians, we must never underestimate the power of our enemy.

“No Fear” clothing. This is one of the most popular lines of clothing currently being purchased by young people. Their decals are on thousands of cars. One of their slogans states, “Absolutely, positively, most definitely – NO FEAR!” Does this sound familiar? Paul states of the wicked “there is NO FEAR of God before their eyes” (Rom 3:18). Did Satan pick this phrase by accident?

Nike “AIR.” The most popular line of athletic shoes has copyrighted this logo. It suggests the one who wears them will have a great vertical leap. Many of their products simply state, “AIR.” We must never forget who the “prince of the power of the “AIR” really is. He is “the spirit that is now at work in the children of disobedience” (Eph 2:2).

“ETERNITY” (fragrance by Calvin Klein). Ads by this company are among the most decadent and immoral. In one ad he states, “I don’t know where I end and you begin.” God has given men and women time to prepare for Eternity, yet this is used as an ad title to confuse this solemn truth.

“Bound for Glory” (Club USA clothes). To most believers, this phrase points us to Heaven and home. But emblazoned on casual clothes and leisure wear, it devalues the greatest gift given by grace to mortals on earth, eternal life. Again, Satan has blurred the eternal meaning of a phrase by materializing it.

The Optima “TRUE GRACE” Card (American Express). These two remarkable words are directly from Scripture, about our Savior. John tells us that “grace and truth came by Jesus Christ” (John 1:17). To these folks, “true grace,, is a real interest-free period; to the child of God, it is “the grace of our Lord Jesus Christ” (2 Cor 8:9), Who could tell His disciples, “I am the truth” (John 14:6). Here again we see Satan at work, demeaning the truths of the Bible.

TAZ (The Tasmanian Devil). Here is one of the most easily recognized and widely marketed cartoon characters all over the world. He is currently available in most department stores on T-shirts, sweatshirts, underwear and hats. Should it really surprise us that a “harmless” cartoon character, worn by millions of young people, is actually displaying one of the names of “the god of this world?” We must never underestimate the power of the Evil one. He still is “that old serpent, the devil” (Rev 12:9, 20:2).

2. The Glorification of Self; Selfishness.

The “me too” generation of a few years ago has become the “me” generation of today. Far too many people are living selfish lives. Many are like the rich farmer of

Luke 12 and the self-righteous Pharisee of Luke 18, both of whom were fatally afflicted with “I” trouble. Even a cursory examination of the following ad slogans will prove this.

“Let them see you” (Luxotica Eyewear).

“Imagine yourself in a Mercury” (Ford).

This type of thinking is contrary to Scripture. Proper thinking for the Christian is to give priority to Divine Persons, others next, but self last. Paul exhorted each of us “not to think of himself more highly than we ought to think” (Rom 12:3). He also urged us to “esteem others better than ourselves” and not to look on our own things, but toward the interests of others (Phil 2:3-4). This was the preface to his teaching us to have the same mind as Christ Jesus, “Who made himself of no reputation … and humbled himself’ (Phil 2:6-8). The Lord Jesus Himself said, after He had taught the lesson of the self-righteous Pharisee, ‘He that exalteth himself shall be abased, and he that humbleth himself shall be exalted.” How different is the thinking fostered by these and many other slogans like them!