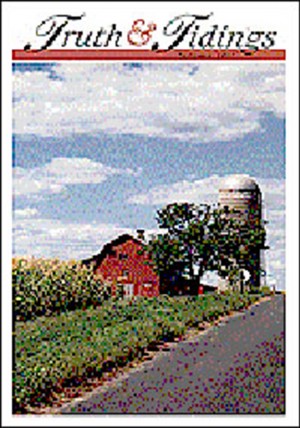 Faith or Fanaticism: Conviction as to One Gathering Center

Faith of Fanaticism: Gathering unto the Name of our Lord Jesus Christ

Go Ye into all the World – Grenada, West Indies

Sanctification and the Law of God

Analysis – A thesis on the law of God.

It may be shown that every verse in Ch. 7 refers to the law of God. We need to see the distinction here between “law” as a moral code, and “law” as a legal system of bondage to which we have died. The issue of law in sanctification is how a Christian is able to fulfill the law’s righteous requirements.

Vs.1 – This verse states a general principle governing all law: that it’s authority applies to living persons only. When a person dies, it’s authority is canceled.

Vs.2-3 – The example now used illustrates this principle adding the further thought that the woman is free to remarry, since death has canceled the “law of the husband”. (This example reenforces the general principle established in Genesis 2 that God intends marriage to last “till death do us part”).

Vs.4 – In the illustration (Vs.2-3), it is the husband who dies and the wife who remarries. The wife does not die, but is said to be “loosed from the law of the husband.” But in the application, the one who remarries is the one who was “put to death” (Newberry margin). But the “brethren” who are put to death to the law are put to death “through the body of Christ,” showing the complete identification of Christ with the “brethren,” their sin and the law’s prescribed penalty. (The way in which the apostle applies the illustration here seems to further emphasize that the wife and husband are indivisible in life in God’s original design – only death separates them.)

The application is remarkable in this that the “new husband” is Christ as well, but is described here as “Him who is raised from the dead.” To review: the sinner is .married” to a husband, the law, in the sense that the law has authority over us and applies to us because of our sins. But Christ “came under the law,” Gal 4:4, took its full penalty and died under its curse, substituting for us. We have thus been “loosed from the law,” or have died to the law “through the body of Christ”. But the One who died, rose from the dead. As a believer, we have been united to the risen Christ “that we should bring forth fruit unto God.”

Vs. 5 – The contrast between “fruit unto death” here, and “fruit unto God” is notable. It is truly a “before” and “after” description of conversion. “In the flesh” describes our state before salvation. In that state, sins as “passionate” worked in our members (tongue, hands, feet, mind, etc.), producing death. It is sobering and humbling to ponder this one line description of the results of our past life: “fruit unto death.” The reference here to the law imparting a passionate character (motions) to sin will be developed later in the chapter. Vs. 6 – The “but now” links to Vs.4, which applied Vs.2-3 where the woman was “loosed from the law of the husband.” We were once held by the law because of our sin guilt, but now we have been delivered from the law. This verse will now distinguish for us between the law as a moral code which is “holy, just and good,” and the law as a legal system by which one strives to be justified and sanctified. The person who tries to be justified and sanctified by serving (as a slave) “in the oldness of the letter” labors to live up to the law as it spells out the righteous requirements of God. But this verse introduces briefly what the apostle will come to in Ch.8: that, having been delivered from a legal system, we now serve “in newness of spirit,” where the Spirit of God empowers the believer to fulfill the righteous requirement of the law (Ch.8:4). This argument is in total agreement with Gal 3:3.

Vs.7a – The apostle raises the question, “Is the law sin?” Is there something inherently evil in the law of God? The answer is short: “By no means.” Paul then defends the law as follows:

Vs.7b – The law actually enlightens our conscience and makes us aware of sin: example, “Thou shalt not covet”.

Vs.8-9 – As an attacking army seeks a position of advantage from which to destroy the enemy, so sin used the law (for example “thou shalt not covet”) to awaken all manner of covetousness in me.

Without this awareness, sin had no way of stirring up such passion. Sin was there all the time; the law simply made me aware of it, which then involved my whole being: my intelligence, to assess moral consequences, will, emotions, and conscience. In this sense, “apart from law, sin was dead.”

Vs.9 continues the thought: without law, I could live; my conscience did not smite me. But the law caused sin to “spring to life” and my conscience slew me.

Vs.11 – The illustration of an attacking army is here again as in Vs.8. Note that a further element in the attack is introduced, that of deceit. As in Vs.8, sin was operative without law, but the person was not aware of it. He is already practicing it; he is already “hooked,” sin comes in for the attack on the person by light from the law; he finds that he is deceived, having sinned in darkness, and he is now slain by his conscience.

Vs.12 – states the conclusion: the law is holy It points to the evil of sin and seeks to separate me from it by my conscience. It is just. It spells out God’s righteous standard of morality Therefore it is good, leading to repentance.

The Design of the Law

It is a statement of spirituality without the power to enable it, v. 13-25

Vs.13 – “That which is good” is the law. Was the good actually an instrument of death to me? By no means!. But rather sin was that instrument. It took advantage of the law to advance to “exceeding sinfulness.” This advancement explains the meaning of Ch. 5:20: “the law entered that the offence might abound. But where sin abounded…” The result was “sin reigning unto death.”

Vs. 14 – Here the law is lifted to a high level. The law actually spells out spirituality: loving God primarily above all others, knowing Him, reverencing His name, eschewing evil and loving one’s neighbor as oneself. These are godly, spiritual statements of the law, as opposed to our fleshly, self-centered selves, influenced by sin.

Vs.15 – In defining spirituality, the law imparts to the believer a desire not to sin, even a hatred of sin, but not the enablement for victory over sin. This results in a sense of futility. Every true believer echoes the language of this passage. There is a tremendous struggle for victory here. The apostle almost divorces himself from his actions and responsibility for them, blaming it on sin within him: “For that which I do, I do not understand (allow not)!”

Vs.17-20 – Sin’s domination and control are real. We should never underestimate the power for evil in our fleshly nature. The law makes me want to do good, but does not empower me to do it. We should learn here our dependence on the Spirit of God to accomplish the will of God. Verse 20 agrees with I John 1:8. The root of sin within is a sobering thought. We have no right to be proud of any degree of spirituality seen in us. It is all of God (Phil 2:13).

1) A law of ever-present evil – the flesh, the inherited fallen nature that tends to sin – Vs. 21;

3) A different law in my members – this may refer to bad habits or practices that are a law or principle of behavior -learned tendencies to do wrong. This law captivates us to the law of sin – Vs. 23a;

4) The law of sin in my members – this was introduced by Adam, and refers to the principle or dominating force that sin effects on us, which, if practiced, captivates us Vs. 23b.

Vs. 24 – Little wonder he expresses his personal wretchedness – the real “I”, and longs for deliverance. “Who shall deliver me from this body of death?” Paul may be referring to the Roman practice of chaining prisoners together. If one died, the other found himself attached to a rotting, stinking corpse. It may be this idea that he has as he considers the “I” as “sold under sin.” It is incorrigible.

Vs. 25 – Ultimate deliverance will one day come through Jesus Christ our Lord. Temporary victories will occur, one at a time, by the Spirit (Ch.8). Meanwhile, the renewed mind agrees with the law of God. The struggle with the flesh which tends to sin will continue “till He come” (I John 3:2-3).