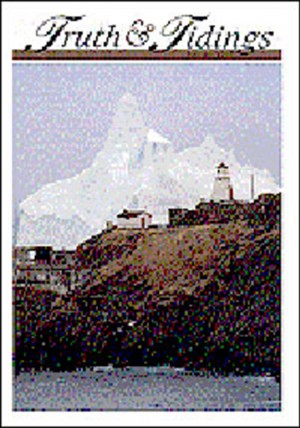 The cascade of events bore thrilling witness to the work of the Spirit of God. Outside a Polish furniture shop, a missionary thrust a New Testament into the hand of a customer entering the store. Flippantly, the customer passed it to the proprietor, Benjamin Sitenhoff, a devout Jew. Furtively, he slid it into his pocket. Finding, as he did, the Messiah from its pages soon spelled the Jewish family horror known as shiva: to his wife, child, and parents … he was dead.

Thrust from home and tormented with questions, Benjamin used a layover in Germany to contact a rabbi named Ludwig Sommer. However, on arriving at the given address, what must have been his shock to meet, instead, an evangelist by name of Ludwig Sommer who had been praying for months to share the scriptures with a son of Abraham! A brief visit turned into weeks as together they pored over those scriptures establishing Benjamin in his new-found faith. Shortly his wife came with their child from Poland intent on winning him back to Judaism. Instead she, herself, was introduced to the Messiah; the work of grace had only begun in two Jewish families.

Circumstances ordered by God? Could it be more apparent? God loves. God cares.

Behind the padlocked door, Geoffrey Bull groped his way over the earthen floor exploring the confines of his dark enclosure. His peering through the sole source of light, a small crack in the wall, only brought the armed guard outside into sharp focus. Numbed with fear, as an animal crouching low in the grasp of an unknown captor, his mind struggled to grasp the reality of solitary confinement.

In the three years since disembarking in Shanghai, God’s triumphant leading had miraculously dispersed barriers to young Geoffrey’s burden to herald the Gospel in Tibet … now this! Before him lay years of confinement, unabated “thought reform” through the evangel of Mao Tse Tung, and perpetual interrogations. Holding true to the Gospel of Christ would be read as mindless mouthings of a reactionary British Imperialist needing harsher reeducation. Not to admit to “crimes against the working class” meant one eventual release: execution.

The crushing weight of that momentary thought engulfed Geoffrey Bull like a tidal wave: his life had been wasted! Did God order these circumstances? Didn’t God love? Didn’t God care?

Is our perception of God’s love and care to be controlled by circumstances? Allow, please, a more basic question. Is it sound faith or mindless fanaticism to assume, irrespective of circumstances, God loves … God cares?

In tears of anguish Geoffrey knelt on that earthen floor. “I wept my way afresh to Calvary. There God met me. Into my heart came a peace and joy in God’s grace in a measure I had never known … it will live with me forever.” At that moment, in a heart softened before the cross, the Spirit of God engraved the words of Jennie Hussey’s hymn:

King of my life I crown Thee now,
Thine may the glory be,
Lest I forget Thy thorn crowned brow,
Lead me to Calvary.

With renewed consecration Geoftrey Bull completed his refresher course in life’s most vital lesson: our Sovereign God loves… and cares. And this is sound faith? Absolutely. For it evaluates circumstances not by present conditions but by eternal purpose revealed in Christ.

Destined through eternal love and transcendent grace to be the “glorious inheritance in the saints” of the “appointed Heir of all things,” we … you and I … are owned by God. That is the “mystery of His will” revealed in Christ. Purchased by precious blood, “we are Christ’s and Christ is God’s.” And that ownership is the key to a sound faith which knows, not assumes, irrespective of circumstances, God loves and God cares.

Ownership by God removes the element of chance and the triumph of evil from every human condition. It instills the character of God in our comprehension of every circumstance and has guaranteed the future, for God’s “plan of the ages”must be brought to fruition through Christ. As God, “He abideth faithful: He cannot deny Himself.” A faith rooted in the character of God could not be more sound.

But sound faith or mindless fanaticism? Arguments such as polemics to support the “existence of God” are irrelevant to this choice. For to “know and understand Me”… God’s character… does not hail from theory. That knowledge… this sound faith… is to be understood and confirmed by personally proving God.

As sinners, we proved God at the cross when before “Christ crucified” we began to learn of Him: God loved… God gave… He cared. Vibrant Christian living is the process of proving God and, consequently, “increasing in the knowledge of God.” Possibly the single, most pervasive Old Testament theme is the tragedy of what might have been… the tragedy of loss because those owned by God failed to prove Him. And that just may be the single greatest tragedy in our Christian experience as well. Prove the premise God loves… God cares irrespective of circumstances? Prove sound faith? Prove Him personally… prove the Person… and you will have proved the premise, which is what we will be constrained to do in moments of Christian experience as God proves us. Few have been so proven in the “trial of your faith” as the Glover family during the Chinese Boxer Rebellion of 1900. Repeatedly fed to a mob incited to “kill the foreign devils”, stripped even of clothes and mercilessly hounded as animals of prey, God… yes God… proved them. And they proved God in a sterling display of sound faith in action. Despite indescribable privation and physical abuse, they shocked the Christian community upon surfacing in Shansi… alive! Sound faith in the God who loves and who cares had enabled them to “obtain promises… escape the edge of the sword and from weakness be made strong.” Recounting those experiences, A. E. Glover wrote “A Thousand Miles of Miracle in China.”

But scarcely a month after escaping the China Inland, Mrs. Flora Glover finally succumbed to the harrowing physical demands of the escape. She died leaving two young children and an infant. So, it wasn’t sound faith after all… it didn’t work: mindless fanaticism drove them to the mission field in the first place. The “carnal mind” controlled by a heart that has not proved God, will never read those circumstances differently. May this be written with the exercise and care it demands: the Glovers, and those who have suffered for Christ as they, through the “fellowship of His sufferings,” came to “know Him” in a measure we may never have the privilege of knowing. Sound faith did work to the glory of God, for God had been sanctified to them in the trial.

And the fallout of sound faith is the very hallmark of “stress management,” for it yields the “peace of God which passeth all understanding.” Having “counted as refuse” a brilliant career among the Jewish intelligentsia and expending every reserve of his being to the cause of Christ, Paul, know, wrote of this peace from prison. Conditions prevailed which would have shattered the sturdiest of spirits, yet the Philippian epistle is suffused with joy Why?

Paul was expressing his joy what brought joy to the heart of God. Or, as J. G. Deck captured this truth: “Thy joys, our deepest joys afford.” God’s joy could only be known and understood by “being filled with the knowledge of His will.” In that context, Paul’s creature comforts only had meaning as they reflected the will of God. And God’s will could only be known in aspiring to “know Him”. But what has just been described is the anatomy of sound faith which affords “joy and peace in believing.” That’s ultimate stress relief!

Who reading this hasn’t been touched by the words that were etched in the wall of an asylum:

To write the love of God above,
Would drain the ocean dry.
Nor could the scroll contain the whole,
Though stretched from sky to sky.