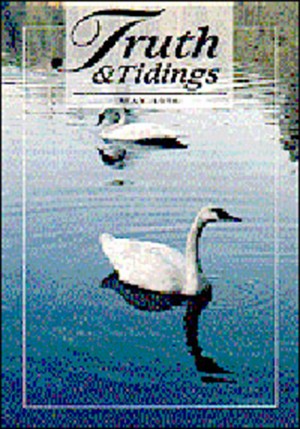 Distance has been defined as the amount of separation between two points, measured along the shortest path. Some distances in your life are increasing while others may be diminishing.

David wrote in I Samuel 20:3, “But truly as the Lord liveth, and as thy soul liveth, there is but a step between me and death.” The two points of distance described here are the “now” of time and the “great hereafter” of eternity. This is a distance that is relentlessly diminishing. Every day, every minute and every breath, the space between you and death is decreasing. This space between us and eternity is what we call life. It is but a short moment, an opportunity that each of us has to prepare to meet God. One person may have many days or years ahead of him, while someone else reading this today may fit into David’s statement, quoted above: “There is but a step between me and death.”

The distance between you and eternity is narrowing as fast as the sands of life can pass through the glass of time. Seek the Lord today! Tomorrow it may be too late!

The Prophet Isaiah wrote in chapter 59:2, “Your iniquities (sins) have separated between you and your God, and your sins have hid His face from you, that He will not hear”. This verse tells of a distance that is widening. Every sin that a person commits increases the space between him and God.

It was a beautiful day on May 19, 1978, when three diving friends were about to descend and explore the sunken ship, Liberty, 30 miles out in the Gulf of Mexico. This was the first time that they had ever gone diving in the Gulf. When they reached the marker buoy that was attached by a chain to the wrecked ship, they tied their boat to the buoy and began preparations to plunge down 100 feet to the sunken remains. Expectantly, they jumped over the side and began to descend. Norman and Hal waited for Joe, but after three minutes they decided to proceed down before their air was depleted, assuming that Joe was still in the boat. Joe, meanwhile couldn’t believe what was happening to him! He had descended fifty feet, when he realized that he had lost sight of his two partners. He instinctively surfaced and began swimming for the boat. He swam for ten minutes and then realized that he was farther from the boat than when he had surfaced. Eventually, the other two surfaced and discovered the grim reality! The current of the Gulf was carrying them away from their only hope, the boat. They were experienced, careful scuba divers, but they had made one great mistake. They failed to leave a man in the boat. What an awful feeling came over them when they realized that the distance from them to their safety was widening! They were lost and there was nothing they could do to save themselves. Thankfully, after several days, they were all safely rescued by those who were searching for them.

You may be totally unaware of the fact that you are drifting away from God because of your sin and are unable to save yourself.

Because of man’s sin, he is at a great distance from God. The first son born on earth was a stranger and a rebel against God. It was man that turned his back on God and went his own way. “All we like sheep have gone astray, we have turned every one to his own way (Isa 53:6). We see the greatness of the love of God in the gift of His Son, Jesus Christ. Christ came into the world to bring man back into fellowship with God. “Christ also hath once suffered for sins, the Just for the unjust, that he might bring us to God” (1 Pet 3:18). God and man can be reconciled because the sin question was settled at the cross. It was there that God punished the Substitute, the One who took the guilty sinner’s place.