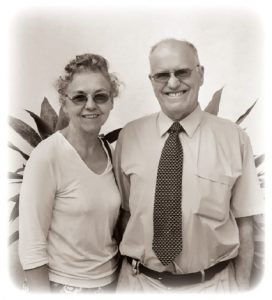 On January 19, 2019, at age 85, our dear friend and faithful servant of the Lord, Jim Webb, was called home to be with the Lord he loved and served. Our beloved brother had a tremendous zeal for the gospel and was commended full time to the Lord’s work in 1966 by believers meeting in the Gospel Hall in Brandon, Manitoba. Jim had been actively involved in outreach work in small rural communities nearby for several years. In the fall of 1979, Jim moved with his wife (Muriel) and family (4 daughters Colleen, Daphne, Barbara & Alison) to Portage la Prairie, MB, and was commended to gospel work by believers meeting in the Portage Gospel Hall. Jim’s faithful wife, Muriel (nee Ronald), passed away only 2 months prior to our brother’s homecall.

In the late 60s, Jim carried on pioneer work in Rivers and Cardale, MB, just north of Brandon. At Cardale, a farming couple in their late 40s who had been studying the Scriptures with the JWs were impressed with the gospel being presented using the same Bible. They trusted Christ, were baptized and joined the Brandon assembly. They remained steadfast in the faith for 50 years, our brother passing away only recently at age 99. In the early 70s, Jim did pioneer work 500 miles north in Thompson, MB, as well as Whitemouth, east of Winnipeg.

Jim placed thousands of John 3:16 gospel texts in motel rooms along 2000 miles of the Trans- Canada Highway from Thunder Bay, ON to Vancouver, BC and within the last decade at Burgessville, ON. He usually visited an upscale motel in the community first, explaining the detailed artwork of the original painting, adding that no one should object to an actual verse from the Bible, which was commonly placed in motel rooms by the Gideon Bible Society. Most owners or managers were impressed with the artwork and asked about the possibility of the framed texts being stolen. Jim said it didn’t bother him if people wanted them in their homes: “Just give me a call and I’ll replace them on my next trip through.”

Many motels had forms in their rooms asking for comments on the service. After a year with the texts hanging on the walls, one motel gave Jim about 15 forms complimenting the texts. Jim took these forms with him to new prospects and would ask the motel owner how long it might take to get that many compliments. In many cases the answer was “Put them up!” During the 1980s, many believers travelling the Canadian Prairies found themselves in motel rooms with a red rose John 3:16 text originally painted by Eleanor Johnston of the West Hillhurst assembly in Calgary, AB. The saints in the Taylorside assembly in Melfort, SK framed many of these texts.

Jim enjoyed studying the Greek language since he found it helped his study of the Bible. On most visits to assemblies and in outlying communities he would inquire as to whether the community had restaurants owned by Greeks. He found many Greek owners and chefs were very receptive to his message when he shared his interest in their language and showed them the Scriptures in the Greek New Testament. Jim found there often was an interest in studying the Bible in the Greek language. He was always welcomed to come back and did so on a repeated basis.

Our brother was faithful in visiting small assemblies far off the beaten track. For many years he made annual visits to hold summer children’s meetings in Mervyn, SK and ministry meetings in Terrace, BC. He also paid regular visits to Arborfield, SK, Kenora, ON and Thunder Bay, ON. In later years he looked forward to helping each September at the Kansas City conference with a visit to the saints in Omaha, and then the Hitesville, IA conference.

Jim enjoyed doing verse-by-verse exposition of Paul’s epistles and helping out in Bible studies with his knowledge of the Greek language. He excelled at personal work. One brother tells of starting door-to-door work with Jim in a small town far removed from an assembly. “Jim went into the first house and I went down one side of the street and returned up the other. About ninety minutes later, there was no sign of Jim. I came to the first house Jim entered and knocked on the door. Jim answered it like he was family. He had a unique gift in communicating with people. He was not obtrusive or overwhelming, but rather meek and mild.”

Five brethren from four assemblies shared memories of Jim at the large funeral held Friday, February 1, in the River Road Gospel Hall in Portage la Prairie. Philip Ronald and Norman Thiessen shared memories from Fifth Avenue Hall where Jim fellowshipped since the assembly’s inception (January 2008). Randy Logue from Glen Ewen, SK spoke. Mark Fitch from Omaha and Stanley Scott from Kansas City also gave words of personal commendation. Paul Thiessen closed with a clear word in the gospel. Jim published a book of short gospel stories called “Better Than Gold” many years ago. His last box of these books was distributed at his funeral. “He being dead yet speaketh” (Heb 11:4).

Many were blessed by our brother’s broad smile and words of encouragement both in the gospel and teaching during five decades of ministry. He truly was a “Communicator” and an “Encourager”!

Farewell, dear brother, until the day dawn or we are called home. You ran your race well.

Attributes that Anchor Us: God is Holy
Lee, James

Saints Who Suffered (3): Job—Suffering in the Unknown
Coleman, Ryan