Assembly testimony in Glen Ewen can be traced back to 1887 when Mr. and Mrs. John Scott, Sr., along with their daughters Elizabeth and Annie, came west from Ontario to what was then known as Meridian, North West Territories. A son, Thomas, had come the year before. The family lived with him until they built their own house of logs between the two ravines.

In the summer of 1887, they decided to set up a table to remember the Lord Jesus Christ in simple obedience to the Word of God, according to Luke 22:19-20, Acts 20:7, 1 Corinthians 11:23-26, and other Scriptures. Along with this little company, others who had come to the community earlier also associated with them. Among those were B. M. Jones, John Fitzpatrick, James Parsons, and Walter Bush. Mr. Parsons lived 12 miles to the northeast and would walk to the Scotts’ the night before if he knew that a horse and buggy would be available on the Lord’s Day. Mr. Bush was illiterate when saved, but with help from Mrs. Bush, could soon read a little from the Scriptures and give ministry to edification.

The small meeting met the first year in Mr. Tom Scott’s house, west of where Kimberly School now stands, and the following year moved to Mr. John Scott’s home between the two ravines, where it remained for some eight years.

In 1888, Thomas Dowkes and his family came west from Ontario and settled in the community. He was of the Exclusive Brethren, and immediately set up a table to remember the Lord in his own home. He was joined at that time by two Duncan brothers, Andrew and Samuel, and later by others.

The two testimonies continued for about eight years. Finally, they decided to get together to see if there were really any Scriptural differences between them or if they were only man-made traditions. After three days of continuous sessions, they concluded that there were only traditions of men between them. They burned all pamphlets and circulars, and determined to go by the Word of God alone. This condition went on nicely for a short time, until the Exclusive element in Winnipeg heard of it and sent a delegation to inform Mr. Dowkes that he was wrong and should separate immediately. Under pressure from Winnipeg, Mr. Dowkes’ group separated and set up an Exclusive table once again. However, shortly after 1900, Mr. Dowkes left the Exclusive meeting to associate with the assembly, until his death at Medicine Hat in 1920.

Two or three years before the turn of the century, a servant of the Lord by the name of John Rae, with his son William, came and had meetings around Meridian, Oxbow, and Estevan. Quite a number were saved and testimonies were established at Oxbow and Estevan. Mr. John McLeod was greatly used in the establishment of the meeting at Estevan by his godly ways and counsel.

Among the ones saved at Meridian, or Glen Ewen as we call it now, were two Hodgson brothers, Alvin and George, who were examples of the grace of God. The assembly met in Mr. Scott’s home until about 1896 or later, when they moved to Mr. Walter Bush’s home east of the river.

Around 1898-1899, they again moved west of the river into a frame schoolhouse, situated about half a mile east of the present Kimberly School, on the south bank of the ravine. About a year later, the school was blown away, necessitating yet another move to the home of Charles Macfarlane, about one half mile south of Kimberly School. Possibly the main reason for moving from the Bush place was the fact that the Scott sisters had to depend upon someone taking them to and from Mr. Bush’s home, but when the assembly met west of the river, they could walk. Also, Charles Macfarlane and Joseph Dowkes had become established on their homesteads south of Kimberly, and Alvin Hodgson was living to the south, across the Canada-United States border. The Colemans, Wakelems, and Mitchells had been gathered out from the denominations around that time, and were identified with the testimony.

Around 1900, Charles Macfarlane built a frame house to replace his log shack. The meeting was then moved to his house, as it was more central for those coming from the north. With seasonal workers coming in during the summer months, the assembly increased in size until, on some occasions, they had to meet in the loft of the barn. In 1913, Mr. Macfarlane purchased Mr. Bush’s farm in the valley east of the river, necessitating a move for the assembly to Kimberly School, where it remained until moving to Roy Macfarlane’s in 1923.

The first gospel hall was built for the gathering of the Lord’s people in 1930. Fourteen years later, due to increasing numbers in the assembly, it was necessary to enlarge the hall. The ridgepole was divided, the west side moved out six feet, and the roof closed in. An addition was added to the south end in 1964, allowing room for a large entrance and washroom facilities. As numbers increased, the facilities became crowded, and a new hall was built in 1978, south of the old one.

Much has happened since we moved into the new hall. God has blessed us in the salvation of many children, and in bringing some contacts from the local community to gather with us to the Lord’s Name. The assembly has had a gospel series nearly every winter, and children’s gospel efforts for many years in two neighboring towns. For about five years the assembly has been allowed to have a short gospel meeting in an old folks’ facility, an effort which God has blessed. One couple in the assembly has monthly meetings in two other old folks’ facilities, with steady attendance. We have had the joy of commending and supporting Mark and Pam Ronald, missionaries to Zambia at Sakeji School.

But we also experience many of the problems and heartaches that other companies, who are lights for the Lord, experience. We have not yet arrived in His immediate Presence. But we are very thankful for the Lord’s grace and mercy to us here, and we take courage and carry on as He gives strength and direction. 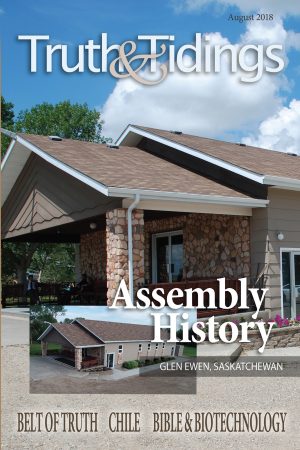