The purpose of these articles is to review the names by which our Lord is identified and see their use in the apostles’ preaching. The names/titles changed with each audience and either progressed toward his exaltation or started there. We will also consider the use of the name “Jesus.” The J. N. Darby New Translation, known for its careful translation of divine names, will be used.

Preaching to the Jews

In the first of eight messages to Jews, in Acts 2, Peter talks about “Jesus.” This is where his audience is mentally. They are aware that “Jesus” was arrested and “Jesus” was crucified. Peter moves forward to show that this Man is the Christ (v30) and then also Lord (v36). Here we have the first use of these three words together (Jesus, Christ, and Lord). This key verse shows that the development of His titles was shaped by a pivotal event, the resurrection. The progress from “man,” to “Christ,” or “Lord” in this sermon sets the stage for many of the following stories. A similar format is used in:

Preaching to the Gentiles

In Acts 17:18, Luke tells us in the narrative that Paul “preached Jesus,” so we presume that while he began with “God,” he moved in his preaching toward the revelation of God in “Jesus” and then to “Lord” (17:31: “judge … by that Man … ordained”). The preaching again moves toward His exaltation. Understandably he does not speak initially of Jesus or the Christ. Obviously, creation is prior to incarnation and consequent glorification.

Preaching to the Believers

Now the names/titles change again. In six sections in Acts, the disciples speak to one another of the “Lord” and “Lord Jesus” (five times each), and of the “Lord Jesus Christ” (three times). The name “Jesus” is used in this way alone once in Acts 1:16.

Interestingly, moving out of Acts to the epistles, 15 epistles begin with “Lord Jesus Christ” and nine of that number also close that way. The epistles most often use “Christ,” which is a title/name that encompasses much of the OT pictures, prophecies, and purposes of God.

The epistles do use a variety of names. For example, Ephesians uses “Lord Jesus Christ” and its compounds 32 times, “Christ” 28 times, and four other titles. It uses “Jesus” once which shows that its use, while significant, is rare. Therefore, when “Jesus” is used, we look carefully to see why. In the eight epistles that use the name “Jesus,” there are 11 passages where it stands alone. The other passages have associated names/titles. By contrast, the use of “Lord Jesus Christ” and its compounds is counted by several hundreds. Be sure of this – the name Jesus is not being used for variety or as a shortcut but is emphasizing His humanity for a contextual reason. A consideration of Philippians 2 proves this.

The Gospels and “Jesus”

At first glance it would seem the gospels use “Jesus” as in Acts 2 where there is progression from the man “Jesus” to “Christ” and “Lord.” The gospels do develop His credentials and John clearly tells us in 20:30 that he wrote for this purpose. But there is a difference. They do not begin with the man “Jesus.”

The gospels are in the style of a narrative and a biography. A biography should use a full title at the beginning and then a simple name afterward. For example, a magazine will introduce “Prince William, Duke of Cambridge” after which, in the article, he is “William.”

The gospels do begin, as expected, with formal titles prior to moving to the narrative use of “Jesus,” a precious name also full of meaning. For example, Matthew begins with “The book of … Jesus Christ,” and of course this is where he is aiming to end, showing that Jesus is the Christ. Only after this introduction do we read of “Jesus” as the subject in the narrative (2:1).

With some audiences we will begin with “Jesus,” the Man. Also, in narrating His story we might use “Jesus” and progress to the prophecies of the Christ and then to His revelation of the Father and His Lordship. With other audiences we may need to begin with “God the Creator,” before moving forward to the “Savior.”

Among believers, we commonly speak of the Lord or Lord Jesus Christ and its several compounds. We rarely use Jesus, and when we do, it is with care and purpose. So did the early disciples. We have a Biblical heritage. 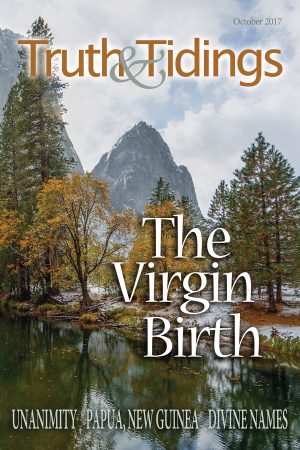