We begin this series on Paul’s letter to Titus where Paul does – with the basics. What is the goal and ground of the Christian life? To make it really easy, draw a line between each phrase in the left hand column with its corresponding match in the right hand column:

The basis of the Christian life     Godly living

There is a world of difference. This distinguishes the gospel message from religion. Every religion offers heaven (or an equivalent) to its adherents on the basis of moral performance. Devastating results show up in this life, as well as in the life to come.  For example, commenting on the high percentage of painkiller prescriptions and related deaths in Utah, a Mormon family member cited a phenomenon known as “toxic perfectionism. There’s a belief amongst members of the LDS church that you need to be perfect. It’s keeping up with the Joneses times 10.”[1]

In the letter to Titus, Paul is going to answer our opening question, but first, he’ll give his qualifications for doing so. As “a servant of God, and an apostle of Jesus Christ” (v1), Paul claims to be an authorized spokesperson for the Christian faith. In other words, his answer is the official one.

In fact, Paul’s apostleship dominates most of his opening greeting. He wants to remind Titus of two aspects of it. First, that it’s “for the sake of” something (v1, ESV). This is the goal of his apostleship. Second, that he is an apostle “in hope of eternal life” (v2). A better way of translating the preposition epi than “in hope” would be “based on.” Thus, in verse two, Paul is stating the ground of his apostleship. It is “based on the hope of eternal life.” We can lay it out visually like this (my own translation):

an apostle of Jesus Christ

for the sake of (kata)

the faith of God’s elect

and their knowledge of the truth

which leads to godliness

the hope of eternal life

Goal of the Christian Life

The Lord Jesus sent Paul out “for the sake of the faith of God’s elect and their knowledge of the truth, which accords with godliness” (v1, ESV). God’s elect are His chosen people. The reason Jesus Christ sent Paul out was that His chosen people might grow in three areas: (1) faith—referring to the act of trusting; (2) knowledge of the truth, that is, the truth of the gospel (see 1Tim 2:4); and (3) godliness.

The last one requires further comment. Does Paul mean the truth “which accords with godliness” (ESV), or the truth “which leads to godliness” (NIV)? It all hinges on the translation of the preposition kata. Thankfully, the difference is minor, but I side with W. E. Vine who says that the truth produces godliness.

Knowing the truth of the gospel leads to godliness, but what is godliness? The word eusebeia is a catch-all word for the behavior that is to mark believers. Stemming from an “awesome respect accorded to God,” it is godly, reverent behavior, the Christian’s pious life.[2]

Putting all this together, the goal of Paul’s apostleship—and therefore of Christianity itself—is that Christians grow in their faith, a faith grounded in the knowledge of the gospel, which will in turn lead to godly living (that sequence is important). When the Holy Spirit convicts us of a lack of godliness, we must always ask the question: What gospel truth do I need to rely on more in order to grow in godliness in this area?

It’s easy to become complacent with our impatience toward others, our ungenerous spirits, consumeristic impulses, or lustful behavior patterns. But Christ’s goal for us is godliness.

Ground of the Christian Life

Thank God that while godly living is the goal of the Christian life, it’s not the basis of it! Rather, the Christian life is “based on the hope of eternal life” (v2). Far from the connotation of wishful thinking it carries today, the word “hope” in the NT is associated with assurance, an eager expectation of something wonderful that awaits us—in this case, eternal life.

If our behavior were the basis of our Christian life, everything would depend on us, but the gospel says everything ultimately depends on God. Speaking about this eternal life which we are guaranteed to enjoy in fullness one day Paul says, “which God, that cannot lie, promised before the world began” (v2).[3] We are not the ground of the Christian life—God is!

Our salvation rests on the promise of a God who cannot lie. With nothing to cover up and no one to impress, He doesn’t even have a reason to lie. God has no desire to lie, nor the capacity. It is an utter impossibility, and this perfectly faithful God is the ground of the Christian life.

God is the ultimate promise keeper. He made this promise of eternal life “before the ages began” and now He has manifested it “at the proper time in His word through [Paul’s] preaching” (vv2-3, ESV). Every word in verses 2 and 3 inspires confidence in this God. He “promised”—not suggested; “before the ages began”—not yesterday; “manifested”—as opposed to concealed; “at the proper time” rather than any old time; “through the preaching”—not the whispering; “of God our Savior,” not our Sympathizer.

In the last half of verse 3, Paul comes full circle. God has entrusted this preaching to Paul by divine command—we’re back to Paul’s apostleship again, and ready to introduce the rest of the letter.

The Recipient, Greeting, and Rest of the Letter

Paul wrote to Titus (1:4) who he left on the island of Crete “to put what remained into order, and appoint elders in every town” (1:5, ESV). Apparently, the Cretans were an unruly bunch, and had been for some time. Paul quotes Epimenides who, already in 600BC was calling them “liars, evil beasts, lazy gluttons” (1:12, ESV). Notice, liars. Paul was sent so that the Cretan Christians might become godly, reflecting the God Who cannot lie. The only thing that could accomplish such a transformation is the truth that leads to godliness (v1).

This is the great contribution Paul’s letter to Titus makes to the canon of Scripture. Perhaps no other book in the Bible emphasizes the tight relationship between beliefs and behavior to the same degree.

Some in Crete were teaching a blend of law and Jewish myths to disastrous effect. Titus needed to rebuke them while teaching others the true gospel and the Christian living it produces. Hence, another contribution of this letter is an emphasis on good works.

Titus needed authority to accomplish his work in Crete. Paul, in establishing his own authority in 1:1-3, has extended the same to Titus. Titus is his “true child” and they share a “common,” that is, the same faith (v3). Those who were listening in on this letter (see the plural “you all” in 3:15) would need to heed Titus’ ministry. Titus will also need the “grace and peace” that come from “God the Father and Christ Jesus our Savior” (1:4, ESV).[4]

The gospel is vital to the way we live. If God promised eternal life “before the world began” (v2), to whom did He promise it? Meditate on verses such as 2 Timothy 1:9, Ephesians 1:4-6, John 17:3, 24 and then revel in one writer’s glorious answer. “God the Father made a promise to His Son. He promised Him a bride. He promised Him you.”[5] With this hope, let us purify ourselves, as Christ is pure (1John 3:3).

[1] Chris McGreal, (2016, May). “It’s beyond pain: how Mormons are left vulnerable in Utah’s opiate crisis.” The Guardian, Retrieved from https://www.theguardian.com.

[3] “cannot lie” is how the KJV translates apseudēs which means “free from all deceit.” Thus both the KJV’s rendering and the ESV’s (“does not lie”) are faithful lexically and theologically.

[4] On the omission of “Lord” and “mercy” from this verse, see Darby’s translation and footnotes. 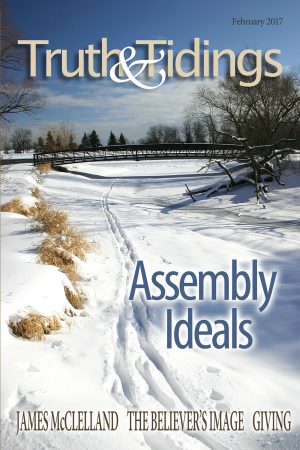